How Can Italian Cinema Be Revived?

The resuscitation of Italian cinema began over twelve years ago, with the gateways to contemporary themes and styles to cinema having opened. 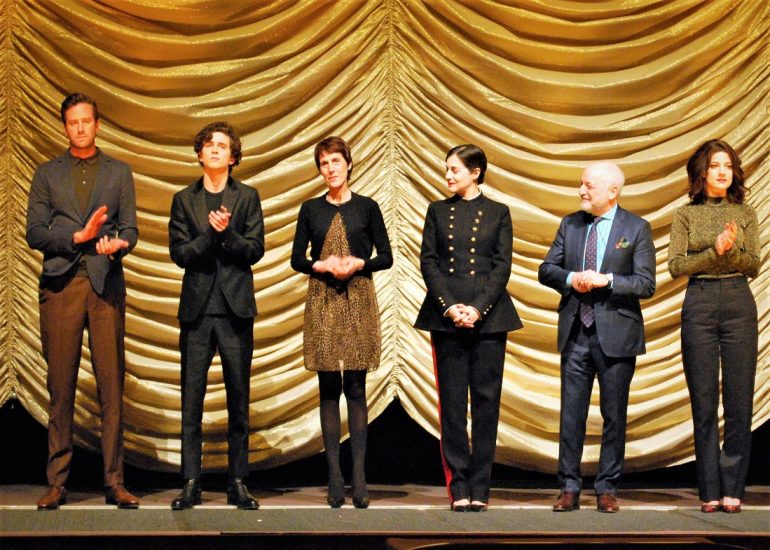 The cast of Call Me By Your Name at the Berlinale. Franz Richter (User:FRZ), CC BY-SA 4.0, via Wikimedia Commons.

The creation of Cinecittà, considered as the largest motion-picture studio in Italy and located in Rome, between 1936 and 1937 responded to the desire of Benito Mussolini to promote fascism through the arts of movies while bearing the hopes it would level with the standards and nuances of the Western Hollywood by producing local films for a global consumption. After having been used as a prisoner-of-war camp by the Allies during the Second World War, its closure brought over the emergence of Italian Neorealism, the literary and cinematic movement which aspired to narrate the events leading up to and during the periods of war. By 1950, the rebuilt Cinecitta regained its footing in producing movies, the start of the Italian cinema’s glory and gem through the works of Michelangelo Antonioni, Vittorio De Sica, Luchino Visconti, Roberto Rossellini, and Federico Fellini.

To mark the rise of the international reception towards Italian artistry in motion-picture, award-winning titles swept the viewers off their feet with inspired-by-true-events movies entangled with humor, romance, mystery, and nostalgia. Roberto Rosellini illustrates the tormenting Nazi occupation in Rome and those who fough against it in Rome, Open City (1945), the first in the director’s lineage of War Trilogy to afford a look at the wartime through the perspective of those who lived through it and the Nastro d’Argento for Film of the Year in 1946. In Federico Fellini’s La Dolce Vita (1960), the movie follows entertainment journalist Marcello Rubini in his adventure and search for love and happiness in life by embracing hedonism, taking home the Palme d’Or at the 1960 at the Cannes Film Festival. Roberto Benigni’s La Vita è Bella (1997), an Oscar International Feature Film in 1999, paints the prowess of imagination through a Jewish librarian and a father who combines it with humor to protect his son from the dangers of the concentration camps in a German-invaded Italy.

While the sound of the global recognition towards the Italian cinema resonates well with the soothing hymn of a violin playing, the period of the late 1970s saw the rise of trashy films or sexy comedies broadcasted on television, perhaps helmed by Fantozzi of Paolo Villagio. The given terms may not evoke appropriateness over these genres identifications, but such language birthed the cause of the gap between a director’s masterpiece being shown in the cinema versus staying at the comfort of one’s home to have a good laugh. The ascent of television’s popularity cracked the pavement of Cinecittà in hosting its studio for movie production as it paved a way for more shootings of television series. The decline of Italian cinema may owe its beginnings at this point.

As Italy helmed the Venice Film Festival in 2014, the disposition of the cinema industry appeared visible, with having only shown three local films among the thirty-one movies shown. In a Telegraph article, it points out how the once gem Italy held in its cinema industry was passed onto France, a considerable historic rival. It did not help that Italian directors, actresses, and actors could not yet gain recognition outside of the country and that Cinecittà still faced struggles in hosting productions. Italian filmmaker Eduardo Winspeare told the Telegraph that non-Italian films winning prizes at Venice should not deter local film-makers. “With two or three Iranian film successes, we go into a crisis, but things are more interesting right now than we think,” he said.

To echo the pervading crisis in the Italian cinema, its neighboring country seems to flourish as Spain has established household names in the cinema industry across the globe through Antonio Banderas, Penelope Cruz, and Javier Bardem to name a few. In the article of Xan Brooks for The Guardian, the author highlights that both Italy and Spain ended propaganda movies and carved a path for neo-realism in motion-pictures, yet Spain has got its edge in the battle as it exports its movies in both Latin America and in the United States where millions of Spanish speakers reside. Aside from that, Spanish directors and movies have gained its footing in exhibiting its industry’s potential to international markets such as Guillermo del Toro’s Pan’s Labyrinth and Alejandro Amenebar’s The Others (starring Nicole Kidman).

Such fear for the decline of Italian cinema fails to faze the optimism of its cult. In an article on MaTerre for the research for the identity of cinema, Adriano Aprà, a critic in the field of cinema, highlights the positivity the entrance of contemporary Italian cinema holds for the country’s creative industry. “Today, the caméra-stylo designed by Alexandre Astruc in 1948 has fully evolved into a more functional one. This enabled a radical innovation of the expressive forms, the creation of a new, more creative, subjective and intimate language. The cinema — which has been only a mass spectacle (with many exceptions during its life) — is today a self medium too,” he wrote. “We, members of Fuorinorma Cultural Association, have chosen around one hundred feature and medium-length films of the last decade and around thirty short-films by Italian filmmakers which demonstrates this renewal. Around 240 films have been screened in independent cinemas in Rome, just outside Rome, and abroad. A trend, of course; maybe, a school, but still not a movement. However, we are trying to make sure that all these authors, who act mostly alone, know each other, realize that they share their problems, concerns, investigations with many other ‘brothers’ and ‘sisters’ from all over the country.”

The resuscitation of Italian cinema began over twelve years ago, with the gateways to contemporary themes and styles to cinema having opened. Subjects such as feminism, immigration, TV populism, social media, and a tinge of recognition of our LGBTQI+. This generation brings Italian cinema to the 21st century in a renewed vigor, from the silver screen to streaming services. A few representatives include Matteo Garrone’s Gomorrah (2008), an overview of the Camorra crime syndicate has created a fortune out of cocaine, corruption and chemical waste; Paolo Sorrentino’s The Great Beauty (2013), the realization of an ageing writer on the beauty and landscape of Rome after having lived a lavish nightlife; Luca Guadagnino’s Call Me By Your Name (2017), a coming-of-age story and romance between Elio and Oliver, an intern for Elio’s father; Piero Messina’s The Wait (2016), an adaptation of a short story by the modernist author Luigi Pirandello about a grieving mother; and Laura Lauchetti’s Twin Flower (2018), a drama about a young woman on the run from human traffickers and a refugee from Ivory Coast who is hiding from the immigration officers and their bond and love during their travel and self-discovery. The list goes on, showcasing how deviation from the established cinematic formula of humor in drama — a success met once but failed to live up to the current standards — and other nuances of the old styles may help revive the surviving industry of one of the homes to a massive cultural legacy and history across the globe.

In finding the equilibrium to even the production of movies that inoculate artistry versus those that imbue a feel-good ambiance, the refreshing take of contemporary Italian cinema, steering from the constitution of the previous decades’ techniques while still instilling some subtleties from Italian filmmakers such as Pier Paolo Pisolini, may revive the dip of reception and quality of the cinema industry in Italy. If this endures long enough to see the revival of its grandeur, Italy will soon re-establish its hallmark in motion-pictures.