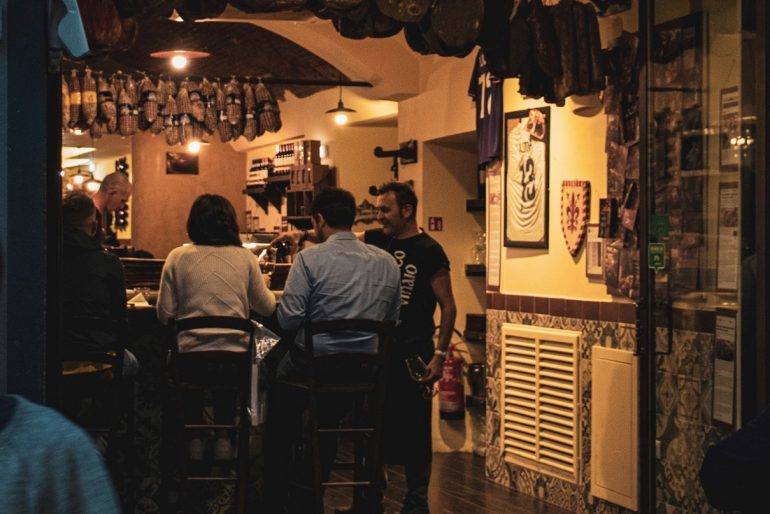 Photo by Eleonora Altomare on Unsplash.

— What in the world are you doing here? Franco.

— I came down to see Maria Grazia and her nephew. Giovanna.

— They live in Rome? Franco.

— She moved down here when Giulia had her baby. Giovanna.

— How long are you here? Franco.

— Just for a few days. I take the train back on Friday. Giovanna.

— Good grief. How did you know I was here? Franco.

— Catia called me and let me know what was happening, that you wouldn’t be coming back when you said you would be. Giovanna.

— I was going to call you. Franco.

— What are they about? Giovanna.

— Things that are happening to the pine trees. Franco.

— So far it is mostly about getting hit by pine cones. Franco.

— Are they hurt? Giovanna.

— What about them? Franco.

— There are no words. It is just music. My father used to play it when I was a little girl. It was very popular. Giovanna.

— So it was dance music? Franco.

— No, it was nice music, you know, but very popular. Giovanna.

— And it was about pine trees? The pines of Rome? Franco.

— Insomma. Did I ever tell you about the chestnut tree we had when I was a little girl? Giovanna.

— No, Giovanna, we need to go back to Furmentùn to have lunch. There is no place to eat here in Rome. It is terrible. Franco.

— Is there some place to have lunch? Giovanna.

— Is it any good? Giovanna.

— What will they have? Giovanna.

— Anything you want. Franco.

— Maybe we can go back to Maria Grazia’s and have something there. Giovanna.

— Is it going to cost a lot? Giovanna.

— Can you leave your work? Giovanna.

— Do we need to lock the door? Giovanna.

— Get your jacket. Giovanna.

Giovanna and Franco walk to a trattoria nearby.

— Have you been here before? Giovanna.

— Never. Does it look okay to you? Franco.

Franco and Giovanna take a table in a row of doubles by the window and crane their necks to look at the day’s offerings that are written on a whiteboard that is hanging on the wall behind a counter full of hot trays.

— What kind of soup do they have? Giovanna.

— Okay, so two bowls of stracciatella and bread and formaggi misti. Okay? Franco.

— Va bene acqua per me. Giovanna.

Franco goes up to the counter, takes two trays, acquires the dishes, and brings them back to the table.

— They will bring the cheese in a bit. Franco.

Franco and Giovanna struggle with the dishes and trays and finally get the table organized.

— Okay? Franco, sitting down after returning the trays to the stack at the end of the counter.

— So you were going to tell me about your chestnut tree. Franco.

— Can’t they name places after other saints? Franco.

— There was a castagnetto there and that’s where we had ours. Giovanna.

— And you used to go there? Franco.

— Of course we did. That’s what we ate. Sometimes that was what there was. Giovanna.

— How old were you? Franco.

— When we were little girls, Maria Grazia and I would go together. Giovanna.

— No, but that was as far as we could go, and we couldn’t dawdle. Giovanna.

— You and Maria Grazia went to gather chestnuts. Giovanna.

— Yes. And so we would walk there. Giovanna.

Giovanna takes a spoonful of soup, a bite of bread, and a sip of water.

— And one time I went, and Maria Grazia and I both had our sacks, and we sat down under the tree to rest after walking there. And I had my sack next to me, and we were just talking and trying to figure out who the other trees belonged to. Giovanna.

The host smiles and leaves.

— And so we were sitting under the tree, each with our canvas bags next to each other, or baskets, I am not sure which, and then all of a sudden — plop! — a chestnut falls into my basket. Giovanna.

— Nothing. She was amazed. We both just laughed. And then we picked up the chestnuts that were on the ground. That was our sign to get moving. And then we took our sticks and knocked down some more. We filled our sacks. And then we went home. Giovanna.

— And that’s the story? Franco.

— No. There’s more. So the next time Maria Grazia and I go, and she asks me if it will happen again. Giovanna.

— The chestnut dropping into your basket. Franco.

— Yes, but no, this time it really was a sack, the second time. Giovanna.

— We walked there, like last time, we sat down to rest, and we had our bags at our sides . . . Giovanna.

— Plop! It happened again. We couldn’t believe it! Giovanna.

— You mean it happened to you again? Franco.

— Yes, but what happened, is that it fell into the sack, but just a little bit was open, because the bag was closed in the middle, so it was like a figure eight, and the little chestnut just snuck into that little hole on the end. Plop! Giovanna.

— Maria Grazia and I laughed but then we started to get scared, because it seemed like the tree was alive, like it knew we were there, and why we were there. Giovanna.