The Timelessness Of Dante

Celebrating Dante Alighieri’s 700-year death anniversary, we wondered who would populate in 2021 his known Inferno from The Divine Comedy. 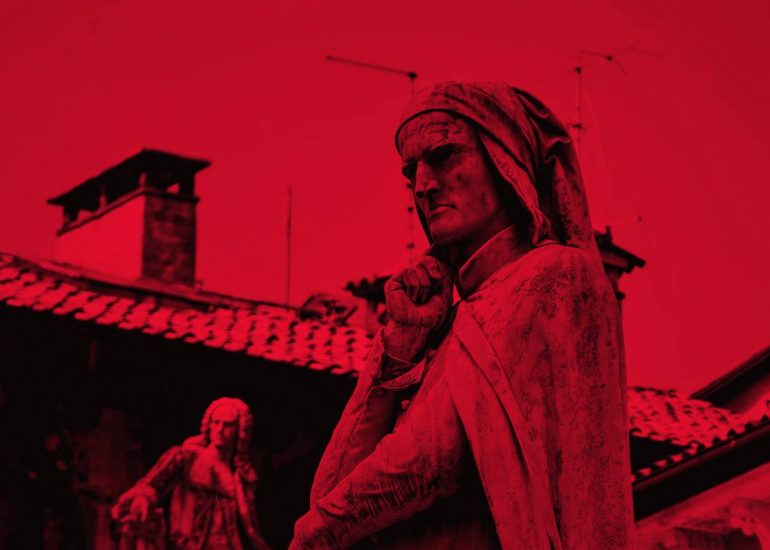 Considering the basis of his most famous works, it has always seemed particularly apt that the death of Dante Alighieri is so widely acknowledged in Italy. It is perhaps even more fitting this year that the 700th anniversary of his death, and the many events celebrating Dante, coincides with the second year of a pandemic that has upended much of our normal lives. In a time that has so profoundly transformed us that even our everyday words have come to mean different things, it seems right to embrace the man known as the father of the Italian language. After all, if the scholars are to be believed, roughly 1,600 of the 2,000 words that make their way into our daily lexicon come from Dante’s works.

But those words weren’t just for the mundane tasks of everyday life. His most famous text, The Divine Comedy, is a narrative in poetic form that traces the path through the afterlife, stopping over in hell, purgatory, and heaven. It has been described as an allegory for the soul’s journey towards God recognizing and rejecting sin, among countless other interpretations, and has become a canonical text for linguistics, literature, and religious scholars. But it’s not just a matter for professors and pundits: Dante’s words also remind us that language has power and the use of it is never neutral whether in matters of science or faith. In an age where we’re forced to figure out where fact ends and fiction begins, it is worth remembering why Dante still matters, now more than ever.

Indeed, I have often found myself referring to Dante throughout this past year, in ways that only occur to me as I watched Roberto Benigni reading the 25th canto of Paradise in front of Sergio Mattarella. I wondered if the President of the Republic has also thought of Dante in these past months, and whether he ever compares current machinations to those of so many centuries ago.

Limbo, or how I learned to ignore the Italian government

The first part of The Divine Comedy describes Dante’s walk through the afterlife, guided as he was by the Roman poet Virgil through the nine circles of hell. Each circle contains different categories of sinners: limbo, lust, gluttony, greed, wrath, heresy, violence, fraud, and treachery. Taken together, they formed the Inferno.

According to Dante, limbo was reserved for the unbaptized and the undecided. In 2021, the indecisive and vacillating Italian government has come to symbolize in-between state, with subterfuge and political maneuvering taking precedence over the greatest emergency the country has faced in generations. We watched as a popular Prime Minister was unceremoniously shown the door and another was appointed with the promise that everything would work out just fine. Promises are another thing with a short shelf life in limbo: newly appointed Italian Prime Minister Mario Draghi, is down by 1.7% in the polls, in one week alone.

Watching the news feels frequently like trying to keep up with a soap opera: unless you watch every episode you’ll miss the color that a region is changing into, and what it means for those of us living there or trying to get there. And when you’re not trying to follow along with the shifting zones, there are the actual politicians themselves, who I easily imagine running aimlessly through limbo. The loudest echo would undoubtedly come from Vittorio Sgarbi, the MP who was carried out of Parliament by security last year like a sack of medieval potatoes. Among his virtues, he is well known for describing those with whom he disagrees as capra, or goat. How fitting.

What did science ever do to you?

Considerate la vostra semenza:/Fatti non foste a viver come bruti,/Ma per seguir virtute e conoscenza. (Consider your origins:/you were not made to live as brutes,/but to follow virtue and knowledge.) — Inferno, Canto 26, 118.

Way back in the before times of 2016, virologist Roberto Burioni of the Vita-Salute San Raffaele University in Milan was asked to appear on television to make the case for vaccines. He was pitted against two skeptics: former DJ Red Ronnie and actress Eleonora Brigliadoni. In retrospect, it seems absurd, but I will nonetheless point out that these skeptics are neither scientists nor doctors. However, it did not stop Burioni from giving what was essentially a mike-drop intervention. Most of his on-screen time had been given to the Italian celebrities, so when it was his turn, he said simply, “The Earth is round, gasoline is flammable, and vaccines are safe and effective,” he said. “All the rest are dangerous lies.”

Radio journalist Alessandro Milan called them “the thirteen most beautiful words heard on TV in the last year.” Since the first cases of COVID-19 appeared in Italy and shortly thereafter around the world, Burioni has faced death threats, political insults, and smears from both ends of the political spectrum. He has nonetheless become one of the most popular voices in Italy and while his manner isn’t always as polished as some of his counterparts, his mission to counter pseudoscience with relatable and easily understood facts is working.

It makes me think once again of Dante, for it was he who reminded us that science and poetry are two faces of the same medal. Scientific inquiry is always a personal quest to understand the essence of humanity, and even in Dante’s time, the merits of it were doubted. Using words as a tool to get people to understand science and to accept it as a force for good really is the only way forward, the only way out of these dark times. E quindi uscimmo, a riveder le stelle.

Past, present, future and the anti-everything

Both the pandemic and digital dependency that has grown as a result has given rise to a group I think of as the ‘anti-everything’: anti-masks, anti-vaccine, anti-COVID, anti-anything. The internet has become their megaphone as they populate its corners with trolls of every kind. While freedom of expression is a right and foundation for a free society, it does become problematic when it conflicts with the simple right to exist. When even Sergio Mattarella feels it necessary to point out that freedom is about not hurting someone else when asking Italians to continue wearing masks, we have to wonder what circle of hell we’re in. I often envision all these angry trolls running towards each other at full speed. In life they were so against anything other than their narrow opinions: in the afterlife, they should get to be angry among themselves. I often imagine I’d find former US President Donald Trump here as well.

However, it is marvelous to observe how relevant Dante’s work is, even seven centuries on. The religious undertones may bit a bit much for our modern sensibilities but Dante’s Inferno highlights concerns that still exist: fighting discrimination, political and religious corruption, and finding peace with ourselves even in the face of being called, “too loud, too fat, too skinny, too womanly, too masculine, too much, too little,” and so forth.

On the occasion of the 700 years’ anniversary of Dante, I often think we should consider a remake of the Inferno and in the process add some of our own pop culture touchstones to the narrative. After all, the true test of any literary work is the relevance it holds for the generations that follow and if there was a year where we could all use a diversion, this has got to be it.