How a construction error in Rome created a lake, helped the environment and united citizens against real estate business. 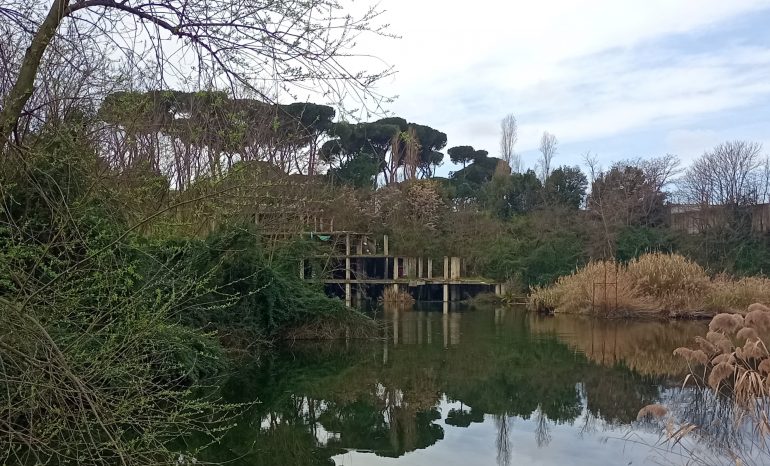 Ex SNIA lake in Rome has become a symbol of resistance – of both nature and citizens – against destruction of environment. Photo: Lidija Pisker.

The lake might have been caused by mistake. But many Romans believe that its creation has been fate. Rome’s Ex SNIA lake has become a symbol of civic activism for environmental protection. It has its own park, its own songs and a social center that supports it. As a result, it’s become one of the most beautiful love stories between modern Rome and its people.

What is Ex SNIA?

The story started in 1992, during the construction of an underground car park for a shopping mall planned in an abandoned industrial building complex in the Pigneto-Prenestino area of eastern Rome. The project’s industrial excavations intercepted an aquifer that was hidden beneath ground and the water filled an artificial reservoir that had been created during the works.

The construction company tried to divert the flow of water by channeling it into the sewers. However, the remedy was as clumsy as the rest of the construction process — in an area that hadn’t been properly examined before the works had started.

The leaking aquifer soon led to the overloading of the sewers and, finally, to the flooding of the whole construction area and nearby Largo Preneste. The water ended up invading the artificial reservoir, making further excavation and construction works impossible.

And there it was. An artificial lake that was, in fact, natural — fed by the subterranean vein that continues to feed it, and to guarantee its water balance.

A lake for everyone

Situated in one of the most modest suburban areas of Rome — surrounded by tall flat buildings and busy asphalted streets — the accidental green oasis is both a miracle and a challenge, just like Rome itself.

Activists like to say that the lake has been created by “nature fighting back against concrete.” At two meters deep, the lake has a low bacterial load, and levels of chemical substances that, by chance, meet environmental standards. The area is bursting with wild ecosystems. There are about 300 botanical species, 11 plant communities, three EU’s priority habitats and 62 species of birds.

The lake — and the surrounding park that owes its existence to it — has helped the polluted and densely populated neighborhood of Rome where it’s situated. Before, there hadn’t been many green areas and community spaces in the area. Now, Ex SNIA offers a popular public open-air spot for local community events and gatherings and children’s playground. Meanwhile, the park is owned and managed by local residents.

The site takes its name from a former textile production company, SNIA, based there until 1954, when the factory closed. In 1995, part of the remaining abandoned factory complex was occupied and turned into one of Rome’s most famous social centers, Ex-SNIA. The center is run by citizens, offering a variety of social, cultural and political activities, most of them free of charge. The activists gathered within the social center have been continuously supporting the protection of the lake through protests and online campaigns.

Despite its many benefits, the existence of the lake has been threatened several times since 1992 by the real estate business that wanted to resume construction.

But, nowadays, in testament to the natural space that the lake has created — and in opposition to businesses that seek its redevelopment — one of the mottos of the citizens’ movement revolving around the lake reads: “Lake for everyone, concrete for noone” (Lago per tutt*, cemento per nessun*).

In the midst of concrete monsters

The creative rebellion of Romans joined with their admiration of the lake has given birth to a song sung by the Roman hip hop group Assalti frontali, and the rock band Il Muro del Canto.

Their song, entitled The lake that fights (ll lago che combatte), was released in 2014 and became a hit throughout Italy. One of its lines says: “At the funeral of your shopping mall, it’s beautiful to see our natural lake” (Al funerale del tuo centro commerciale, è bellissimo vedere il nostro lago naturale). The song helped the story of the ‘rebel lake’ reaching other parts of Italy:

A year later, Assalti frontali released another song devoted to the EX SNIA lake called At the bottom of the lake (In fondo al lago).

From an abandoned commercial center to a national monument

After years of civic fights for the lake, in July 2020, the Lazio region (one of Italy’s twenty administrative units) proclaimed the lake to be a “natural monument.”

Activists have hailed this move as the first step towards the protection of the lake and the surrounding vegetation, but they don’t plan on stopping there. The status of the lake remains unresolved, as it is still technically private property.

As a result, this March 22, on the occasion of World Water Day, the activists erected a banner saying “The lake is the good of everyone” (Il lago è il bene di tutti) across the lake, demanding that the local government legally expropriate the land and make it a public territory.

The Ex SNIA lake might have been created by a mistake. But it has become an important natural resource — and a powerful story of community solidarity — for the people who live “in the midst of concrete monsters.”