How To Found A Colony On Mars: Alessandro Angione

Scientists, philosophers and poets have long imagined life in the stars. Thanks to six Italian students, we're one step closer to making that a reality. 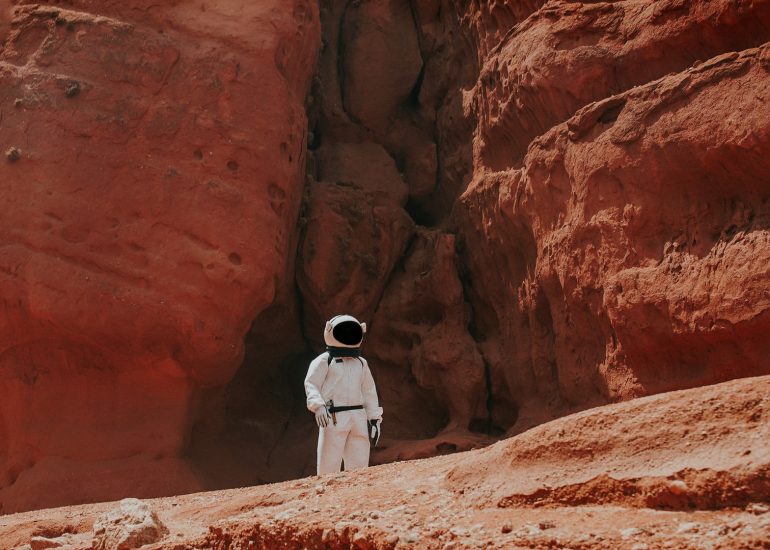 Human life on Mars will be possible soon. Photo: Nicolas Lobos on Unsplash.

From Lucian of Samosata to Ludovico Ariosto, scientists, philosophers, and poets have long imagined life in the sky. Now, we are one step closer to making that fantasy a reality. And, surprisingly, it’s thanks to a team of six Italian students.

The group, calling themselves the Archimars, have written a cutting-edge dissertation on the possibility of a village on the Red Planet. They’re calling it Hive Mars, thanks to its distinctive, modular arrangement. It looks like a new Italian space renaissance may have just begun.

We sat down to ask some questions to one of the masterminds behind the project, Alessandro Angione, a recent graduate in Civil Engineering and Architecture at the Polytechnic University of Bari. Alessandro, together with five other students, used their dissertation — mixing architecture and space engineering — to zero in on the possibilities of life on Mars. And, as the first dissertation in Italy about a ground-breaking topic like architecture in space, it’s received a lot of attention.

How did the idea come about?

First of all, I would like to thank the whole team for all of their excellent work. The guidance of professors Giuseppe Fallacara and Vittorio Netti, for example, was pivotal for the project. I am grateful for having worked with my colleagues, Federica Buono, Ivana Fuscello, Isabella Paradiso, Mirha Vlahovljak and Hana Zečević, too.

Also, I don’t want to forget the backing of the SICSA (Sasakawa International Center for Space Architecture) in Houston. Without their help, it wouldn’t have been possible for Hive Mars to have become a reality.

Coming back to your question, the idea came after a meeting with our teachers. The space architect Vittorio Netti and our professor Giuseppe Fallacara threw down the gauntlet, asking whether it would be possible to set a proper human village on the surface of Mars. We couldn’t resist the challenge. Eventually, we came up with a project that would build a settlement in Hellas Planitia, a crater on Mars.

How did you choose Hellas Planitia as the site of the settlement?

Hellas Planitia is in the southern hemisphere of the planet. It’s the best option because it has some pretty unique features.

Most notably, it’s a crater about 7,000 meters deep. That means that not only does it provide cover from radiation and storms, but it also has a supply of water and ice from underground — which is obviously the bread and butter for every village, even on Mars.

How does your project work?

We drew a comprehensive roadmap, planning two main steps. The first move is to pack rovers and landers on the shuttle Big Falcon Rocket in 2030. After landing on Mars, these machines would pioneer the crater’s surface, establishing the village and exploring the area.

Each of these eight robots will play a role in ‘terraforming’ Mars. That means flattening the surface and carting away materials, from processing martian regolith (that’s the rocks and material that covers the planet’s surface) to putting structures in place.

This way, everything will be prepared for the ultimate goal: that’s human life. Humans will eventually travel to Mars a little later on and they will find a new home waiting for them when they land on the planet in 2066.

By the way, it’s worth noting that rovers and landers on Mars would exploit local raw materials, especially martian regolith, to establish the village and build roads. This way, the pioneers will make the most of martian rocks and minerals, adapting to circumstances just like we do on every corner of the Earth.

How will a Martian house look?

The plan is for robots to establish round dome-like houses made of two structures. A rover will collect martian regolith to build up the outer frame. Once the external building is ready, another robot adds the ready-made inner bloc inside the building. A pressurization system will then make interiors fit for residential use.

Beside that, we outlined an unconventional pattern for the outer structure — and that’s why we called it the Hive. These will be domes that resemble Martian dunes, so they provide self-shadowing and collect sand on their surface. Consequently, we’ll kill two birds with one stone. On the one hand, we’ll prevent dramatic fluctuations in temperature. On the other, the external frame will bolster the structure’s resistance by adding sand to its surface.

What about the interior?

Inside these domes, we would find three different floors, each having specific functions. On the ground floor (70 square meters), there will be a medical and scientific hub. On the first floor (60 square meters), you’d find private rooms for the crew. And finally, the second floor belongs to a common recreation area of 45 square meters, where the crew members can relax, practice sport and read.

We chose to pick the hive shape so that every dome could link up with future buildings. If conditions on Mars allow colonization, it will be possible to increase the number of structures by adding new homes to the existing ones.

And the scientific community — does it support your project?

Papers from NASA, Space Architecture, and ESA bolster our dissertation. Moreover, we took as a pattern the 2019 3D-Printed habitat challenge by NASA. These documents allowed the team to gain a deeper understanding of relevant topics.

For instance, we went through pivotal issues like the supply of food and water or spacemen’s lives. We even focused on recycling waste for generating energy and exploiting local resources.

Made-in-Italy in the outer space

Italy is climbing the ladder where space is concerned. Not only is Italy one of the major contributors to the European Space Agency, funding 15.9% of its budget (trailing only Germany and France). But its enterprises are playing a critical role. For instance, Italian players like Avio and Thales Alenia Space Italia are playing the lead in the project concerning the first European shuttle Space Rider.

Meanwhile, it shouldn’t be underestimated that ASI (the Italian Space Agency) will soon join the NASA Artemis program to further explore the Moon. And many other international plans regarding space research see Italian firms and players playing pivotal responsibilities. From exploring outer space to improving existing technologies, it appears that the universe is a brand-new area in which Italian players can excel.

Archimars‘s dissertation represents one step closer to this brave new world — and the great thing is that it’s powered by the Italian youth.