At An Osteria In The Apennines

Am I the only traveler who loves to go back to the same place over and over again? 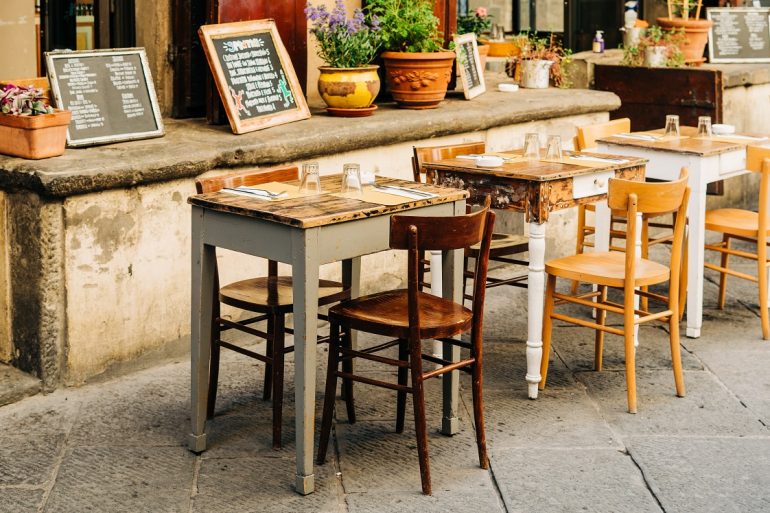 It was one of those dark and woody places that are perfect on a cold night in the mountains. I had arrived that day to start a research project and was starving. The woman at the hotel where I was staying had recommended it. She was beautiful in the way that only Italian women can be, possessing a certain quality that although intangible is unmistakable when you see it; no, not when you see it, when you are embraced by it, by its radiant electricity that stops your heart once it ebbs over you and through you.

The owner seemed grumpy, grumpy and ruffled, having one of those faces that over time has become a series of folds rather than wrinkles, furrows that matched the waviness of his graying hair.

He went away and came back with a carafe and a glass, which he put solidly on the table before me.

He filled my glass and then turned toward the kitchen. It was extremely cold outside and it was nice to be in the dark room that was warmed not only by a fire, but by the heat from the kitchen. I could hear him banging pots and pans around as he prepared my meal. It seemed like we were the only two people in the place and I felt privileged in a way, one of those times when a long and difficult journey is rewarded by a perfect place to end it. I lifted my glass to my lips and took a sip. I had rarely tasted wine so good.

— How can you drink that? Korean bar hostess.

— Just used to it I guess. Me, many years earlier, in another a city that was far away from where I was now.

I took another sip and almost broke out laughing. The wine was incredibly good. I sat and sipped my wine, not in any hurry at all, which was unusual for me, and stared into the fire.

— Le tagliatelle. Him, setting the plate in front of me with the same solidity as with the wine.

— Buona sera, professore. Him again, to a man who walked in through the door.

I looked up and over at the tall, dark and distinguished older man who had entered: dark hair, dark top coat, dark suit and shoes, a maroon scarf around his neck. He had a newspaper under his left arm and headed toward a table in the corner, after slipping off his top coat and handing it to the restauranteur, having folded it in half first lengthwise and then letting the top third fall elegantly over his right arm.

I could only look at him and smile with my mouth closed as I had just taken a mouthful of the tagliatelle.

— Ottimo. Me, having just swallowed in time to blurt out an answer.

The restauranteur nodded and headed over to the table where the distinguished man sat, immediately breaking into conversation with him. After a few exchanges, the restauranteur headed back to the kitchen, pushing through the swinging doors, which let out a brief flash of light and another wave of warmth.

I looked over at the distinguished man. He was not much older than I was, but infinitely more refined. He sat reading his newspaper, folded in a way that allowed him to hold it effortlessly in front of him, but held up high enough so that neither it nor his forearms nor his elbows touched the table. He even still had his jacket buttoned.

I, on the other hand, had immediately taken off my blazer, which I had slung over the back of my chair, in that way that always makes me think that I am letting my chair wear my jacket for a while, always cheered by the happy accident that chair backs and human backs bear a remarkably similar anatomy. I had also rolled up my sleeves, all the way past the elbow, having long ago decided that I could not eat any other way. I had also slipped off my wristwatch and dropped it into the right hand pocket of my blazer. Apparently, I approached every meal as if I were about to deliver a baby, or get in a fist fight, or change the oil in my car. Had I a wedding ring I would no doubt have dispatched it also in some similar way.

And so I sat and ate, primo and then secondo, expertly working my way through the carafe of wine so that I had the right amount left for future projects.

In he went through the doors. More banging followed, but softer this time, simpler. He soon pushed his way out, plate in hand, which set down in front of me, with the same solid thud as before. The pie was custardy and chestnutty, perfectly warm, crackly on top and creamy inside, the crust solid but flaky, buttery. I took a bite and swallowed, then a generous sip of wine.

I looked over at the distinguished man. He was cutting something on his plate, resting his knife on his plate before passing his fork to his right hand. I was happy to remember that I had at least broken myself of the habit of holding onto my glass with my left hand as I used my fork with my right, like a prisoner in a mess hall who wasn’t allowed to have a knife. The distinguished man had lain his newspaper to the left of his plate, still perfectly folded, and he looked down on it through his reading glasses, his head tilted at an elegant angle.

I was in town for a week and I returned to the same osteria every night as there was really no other place to go, not that I was unhappy about it. I was usually the only diner there and the restauranteur began to come out to give me company, sitting in a chair at another table, turning it so he could face me.

— A causa del freddo? Me, even though I knew that was not the reason.

This had become a routine for us. It was my last night in town and I was sad to have it end. After a minute or two the restauranteur pushed his way through the swinging doors, the piece of pie on a plate, weeping its liquid onto its surface, a fork stuck into the top, tines down.