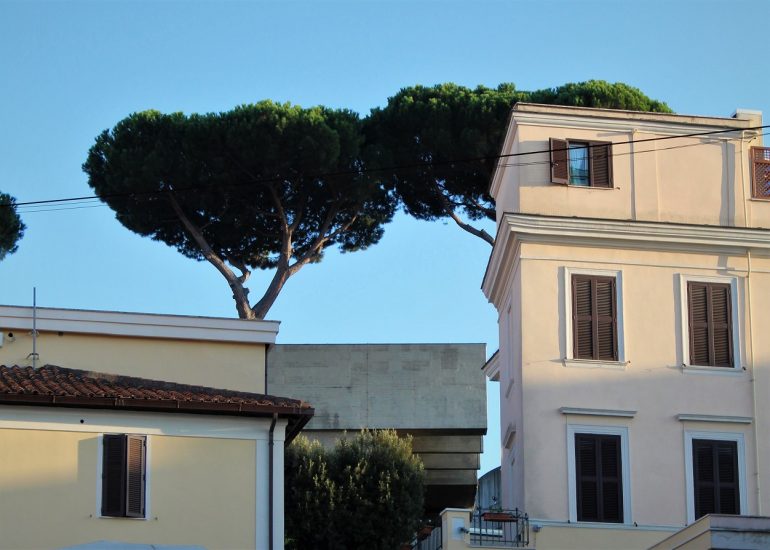 Two pines stand out against the roofs of Rome. Photo by Anne Nygård on Unsplash.

Something is happening to the stone pines of Rome, Pinus pinea, and Franco is asked to discover exactly what it is. On holiday in the city with Catia, Franco is reluctant to trouble his visit or delay his return home, so he initially dismisses the case as a police matter and politely declines the city’s request for help. Something that Giovanna tells him leads him to reconsider his decision, however, and Catia’s unplanned and sudden departure leaves him little choice but to agree to take on the project. He delivers his account in a series of reports to the Planning Department, a narrative that on its surface reveals a complex set of relations among a city, its humans and its plants, but also the thick skein of relations that have long existed between Franco and Giovanna, as well as those that are rapidly developing between him and Catia. Central to the report are the pine trees themselves, and their long and tangled history, both before and after their arrival in the Eternal City.

On the morning of 26 October, between 11:00 and 11:23, Mr Kobayashi led a group of 13 tourists up the Palatine Hill. It began to drizzle, so he directed the group to take shelter under the first in a long row of stone pines that lined the trail that runs parallel to the Via di San Gregorio, and leads to the Chiesa di San Bonaventura al Palatino. Mr Kobayashi carried in his left hand a red pennant mounted on a slender fiberglass rod, and he raised it as high as he could so that all of the members of his group could see it. With his right hand he gestured to the group to cluster tightly around the trunk of the tree so as to take maximum advantage of the protective qualities of its canopy. Being a mature specimen, the stone pine was tall with a well developed crown, and so resembled a giant umbrella. Mr Kobayashi immediately decided to take the arrival of the storm to point out this unique feature of the species, Pinus pinea, thereby turning a fortuitous event into a fortunate opportunity. Before he could begin his talk, however, he saw that he would have to quell a slight disturbance that was being created by another group of tourists who, having illicitly attached themselves to the official tour to take free advantage of Mr Kobayashi’s expertise, began jostling around with their selfie sticks to get the best shot of themselves with what even they recognized as a notable element in the landscape. Just as Mr Kobayashi directed his gaze toward the interlopers, adjusting his throat to produce the ideal modulation for the distance that he had calculated to lie between himself and the group, he felt a sudden strike through his flag hand, a blow that nearly knocked the pennant from his grasp. Looking up, past the green visor of his otherwise white bucket hat, Mr Kobayashi discovered that a pine cone was firmly lodged on the tip of the flagpole. His cheeks immediately flushed red with shame, the color creating a striking combination with his green and white hat, and nearly matching that of his flag, as he assumed that he had risen his left hand so high, with an uncharacteristic lack of caution, as to spear the cone as it hung innocently and unobtrusively on its placid and feathery branch, attending to nothing but the agenda that nature had ordained in it. But just another instant of observation indicated to Mr Kobayashi that this hypothesis was unviable, since even the lowest branch on the towering pine tree was several meters above his head, and therefore well out of reach of the tip of the slender fiberglass pole, no matter how high he might have raised it.

And so Mr Kobayashi formulated other hypotheses. Perhaps there were more members to the rambunctious group, who had detached from it and had been running around committing pranks, such as sticking pine cones onto the ends of flagpoles. Or perhaps the bad behavior of the group had inspired others to create their own disrespectful and unruly diversions. Perhaps the perpetrators were not humans but another species, a bird for example, who had flown headlong into the cone, distracted by the red banner, a scenario that caused Mr Kobayashi’s cheeks to flush with shame once again, because never would he want to be the kind of person who was known to have created distress in animals and other beings of nature. Or maybe it was a species that was unruly as opposed to merely clumsy, negligent or absent minded. He had read just the other day that seagulls had taken over Rome, having grown in both brawniness and brazenness after feeding on the steaming heaps of refuse that now regularly lined the capitol’s streets. One such gull could have easily taken a discarded pine cone to a great height and then dropped it so that it impacted the tip of the pole with sufficient force as to impale itself as it had. Mr Kobayashi considered the probability of this scenario, deeming it unlikely that a seagull would have transported a pine cone to the exact location over him so as to allow it to strike his flagpole in just the right way as to stick firmly onto it. But then he considered that an infinite number of occurrences were even more unlikely, such as one in which the pine cone would perhaps be replaced by a kiwi or a diamond or a sea anemone, heaven forbid, and in that light the lodging of a pine cone upon a flagpole, that was in fact being held under a pine tree, did not seem so unlikely after all, at least in a comparative sense. But Mr Kobayashi did not see any seagulls in the vicinity, neither on the ground nor in the sky, so he returned to the hypothesis stage of his contemplation to think again what else might offer better insight into his present condition, as well as that of the flagpole.

Mr Kobayashi looked up from the pine cone that he now held before him, still perched as it was on the end of the flagpole, the bottom of which now rested between his feet, and the cone encumbered tip of which he now held in his hands. He looked up and saw his group of tourists, all chatting amiably while sheltering themselves under the great pine canopy, with some remarking on how heavy the rainfall had grown, and others remarking on how dry the tree was keeping them. The unruly group had apparently departed, and so Mr Kobayashi adjusted his throat once again to achieve the proper modulation and then, projecting to his audience, his face illuminated and animated by the brilliance of the ideas he conveyed, began to tell the story of the stone pines of Rome, trees that had a particular shape and that had become a symbol of the city, a symbol that had a long and deep history, a history that was not as long and deep as that of the city itself, but that reached so far back in time as to be virtually so.