While watching a program on the relationship between wild dogs and marsh bucks, it occurred to me that the dynamic might shed some light on the development of language. 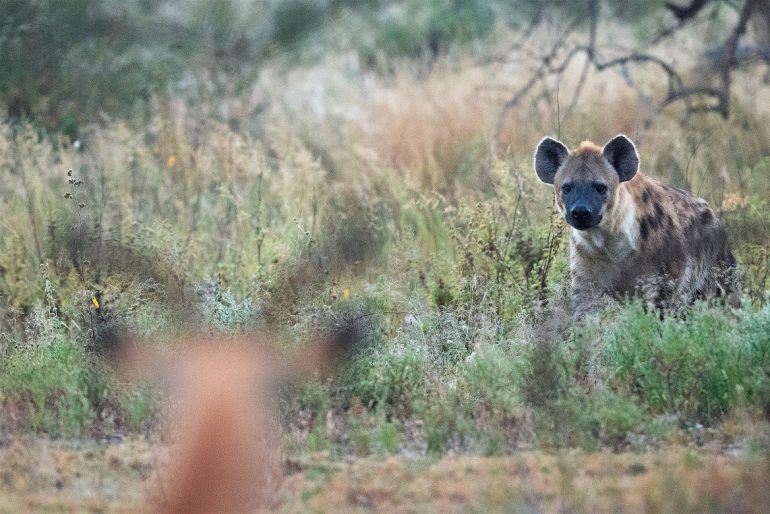 A wild dog ready to attack its prey. Photo by Vincent van Zalinge on Unsplash.

I have often wondered the reason why some languages, such as Italian, gender their nouns while others, such as English, do not.

Conservation biologists are developing a theory that expands the role that predators play in a place’s ecology. They have hypothesized, and have demonstrated fairly convincingly, that predators influence the growth of a prey species not only by eating them, but also by striking fear into their gentle hearts. For example, in one region of Mozambique most of the large predators — let’s say lions and other big felines but also wild dogs and hyenas — were killed or driven away by a recent war. This led to a rapid increase in the population of marsh bucks, a kind of ungulate, who in addition to growing in number also extended their habitat, taking over territory that in the past had been inhabited by other species of prey animals. To solve the problem of too many marsh bucks, at least from the standpoint of conservation biology, ecologists decided to reintroduce a pack of wild dogs who would prey on the marsh bucks and thus keep their population in control. What the ecologists discovered, however, was that the introduction of the wild dogs had an effect on the marsh bucks that went beyond the simple effect of killing and consuming them. Italian

The mere presence of the dogs introduced a new element of fear that had two principle effects: one, the sight of the dogs, and even just their sound and smell, were enough to scare the marsh bucks back into their normal habitats, and two, the marsh bucks no longer had the space, resources and peace of mind to breed prolifically. The simple signs of wild dog presence induced the marsh bucks to become hyper vigilant, which drew time and energy away from their feeding and reproductive activities. With the arrival of the wild dogs, life suddenly became much harder for the marsh bucks, above and beyond the mathematical consequences of having the numbers of their herd reduced on a regular basis. The conservation ecologists term this collateral effect of the presence of predators a ‘fearscape’, and the idea now animates discussions of how species interact with each other.

As I was thinking about this idea, it occurred to me that it might shed some light on the development of language. I have often wondered why some languages, such as Italian, gender their nouns while others, such as English, do not. What is the motive or rationale behind such a feature? It does not seem to be descriptive of observed reality. For example, there is nothing particularly masculine about a dress, quite the opposite in fact, so why is the Italian word for it, vestito, masculine? Similarly, there is nothing feminine about an axe, so why is the Italian word for it, ascia, feminine? The truth is that the gendering of Italian nouns has little to do with sex in the biological sense; they are merely categories, such as black and white, A and B, or 1 and 2. There are times when a noun does change gender to correspond to an observable feature, ragazzo for boy and ragazza for girl, but this is not the case usually: a bird is an uccello whether it is male or female; there is no such thing as an uccella.

So then why do it? Why gender nouns? It seems like just an extra layer of complication that does not facilitate communication. In this discussion, and philologists please correct me, I want to float the idea that the developers of the Italian language, let’s therefore say the developers of Latin, who were perhaps a relatively small group of priests, monks and other scholars, but also everyday users of the vernacular form, decided to gender nouns to indicate and inculcate a certain order on the world, and they termed these categories masculine and feminine because this was an order that was readily apparent and easily understood as it was highly evident in the natural world, human society included. That masculine nouns are indicated mostly by a terminal ‘o’ and feminine nouns by a terminal ‘a’ is arbitrary.

So in my adaptive model: the early developers of Latin are the conservation biologists, gendered nouns are the predators, and the speakers of Latin are the prey. By forcing language users to learn and conform to a linguistic feature that maps only somewhat onto the observable and discussable world, the creators and shapers of language create and shape also culture and society writ large, by exhausting energy that might otherwise be channeled into individual agency, such as rebellion. Such a feature is not wholly abusive, however, since a bilateral system does offer great utility to the descriptive power of a language, not only in the field of gender relations, as in male and female, but also with respect to negotiation, as in yes and no, or even general orientation, as in up and down, left and right, forward and backward, and so on.

But English does just fine without gendered nouns. It does have peculiar spelling, however. Where Italian orthography is eminently logical and elegant, English is a muddle of systems, owing mostly to the alacrity with which it borrows words wholesale into its vocabulary, such as the silent ‘h’ from Dutch (ghost), the hard double ‘z’ from Italian (piazza), and the multiple pronunciations of ‘ough’, that cannot be derived from a consistent rule but must be learned individually (tough, through, bough). Thus, spelling carries an undue importance in English, enough to allow a reader to assess the intelligence of an author who writes ‘discreet’ in place of ‘discrete’, the two words being pronounced the same way but having different meanings. Writing ‘there’ in place of ‘their’ will lead some reviewers to immediately slash your IQ by twenty points. The complicated and inconsistent spelling of English words may be the consequence of an historical accident, but the degree to which a writer masters it has become a barometer of their level of erudition, a collateral indicator of their natural intelligence and academic fitness.

So only the marsh bucks who manage to heed the yips and howls of the wild dogs, and still have the focus and energy to mate and reproduce, are able to pass their genes into the future. Similarly, only the students who master all of the features of a language, and still have the focus and energy to develop more advanced skills, are able to rise through the ranks of school and work. Additionally, they display that they are willing to conform to a system and enroll themselves in it, to be compliant to its rules and regulations.

In the course of writing a series of novels, I am developing a language that is spoken exclusively by plants. I call it ‘phaseolan’ and here is a sample of it:

This translates into English as:

In the morning i like hot coffee with milk and bread with jam.

Note that in this preliminary form, nothing is capitalized or gendered, and there is no punctuation. As I learn more about the nature of plants, I am sure that this will change. I doubt that plants have much interest in coffee, milk, bread and jam; more likely it is water, carbon, nitrogen and sunlight that interest them. How phaseolan will come to reflect that, and how my own perspectives and motives will further shape the language, remains to be seen.