5 Reasons Why Calabria Is More Than Just ‘The Toe’

The southernmost tip of Italy is ripe for a renaissance. 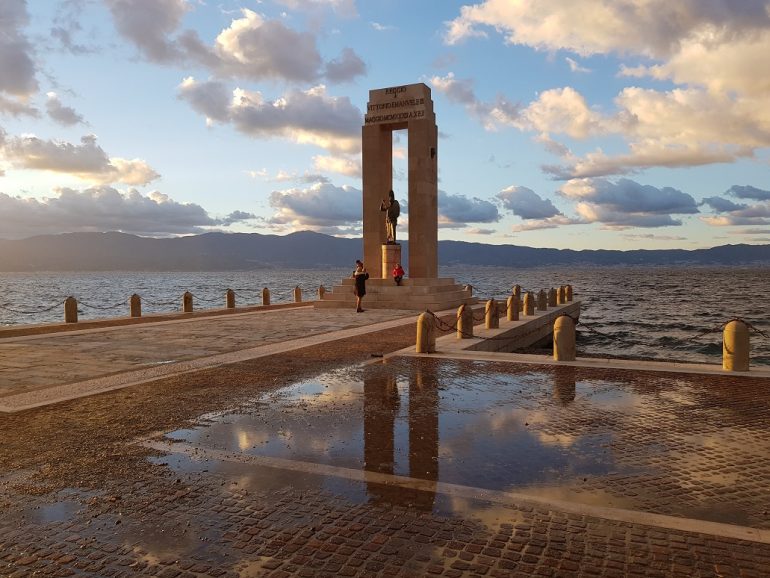 The promenade of Reggio Calabria, Calabria, Italy. Photo by Antonino Trimboli on Unsplash.

Whenever someone in my native Ireland asks me where in Italy I live and I answer “Calabria,” I almost always get the same reaction: a vacant nod or a question along the lines of “Is that near…?” I find that if I simply say, ‘The Toe,” people can connect that to the visual representation of ‘The Boot’ for which Italy has become so famous. That the area has an actual name has mostly interested dedicated geography buffs, intrepid travellers on their way to Sicily and of course, crime aficionados. These days, people are becoming much more familiar with Calabria, and thankfully it’s for all the right reasons.

Once the heart of the Mediterranean, Calabria was once proudly referred to as Magna Grecia (Greater Greece) and served as the crossroads for European civilization. It’s an intriguing and complex place that has been shaped by myth and legend, with natural beauty.

While I am originally from Ireland, Calabria has been my home for many years. The tourism infrastructure in the area has a long way to go to stand ‘toe to toe’ with the more developed corridors in other parts of the country, but it also has much to gain from this type of investment. And while it may seem counterintuitive to think about this in the middle of a pandemic, which has seen a massive drop in global tourism and travel, it may also be the perfect time to think about remaking the Calabria brand. Here are 5 reasons why it’s worth it.

1. What tourists want, Calabria can offer

Tourists who want to soak in the sun without travelling half-way around the world have long opted for southern European destinations like Spain, Portugal, Greece, Croatia, Malta, Cyprus and Turkey. They have well a well-developed tourist industry providing exactly what the budget-conscious tourist wants: ‘fun and sun’. But Calabria has all of that and more. Seasoned travellers who have done their homework know how to navigate the region and they know its a hidden gem. Gastronomy buffs, cyclists, history researchers, photographers, and travellers looking to avoid camera-clicking crowds and busloads of tour groups will all find themselves enchanted with Calabria. Plus, both Lamezia and Reggio Calabria airports are now busy hubs and when holiday travel takes off again they are ready to play their part.

2. It’s a diamond in the rough, and that’s what is great about it

Of course, the traditional ‘giants’ of Italian tourism will continue to attract tourists, and I’m not saying that people shouldn’t visit Florence, Milan, Bologna, Urbino, Venice or Rome. They are after all the epitome of the Bel paese. But visiting Calabria doesn’t have to mean choosing one or the other, especially when there is so much rugged beauty to offer in ‘The Toe’. Sardinia, Sicily and Apulia have all developed a market for off the beaten path destinations and now offer holiday packages that combine mountains, beaches, cities and farms to great success.

Calabria needs to work on creating its brand and while it might seem counterintuitive, maybe honesty is really the best policy. Many facilities won’t be ‘within driving distance’ of the most spectacular sights and there will be plenty of instances that visitors will need to be a little more intrepid in order to get where they’re going. But this should be the fun of the trip, shouldn’t it? There are so few places left to really get lost anymore, and maybe Calabria can bring people back to that sense of exploration.

3. Calabria can and should be a valuable player on Team Italy

The Calabrian Tourist Board is still struggling to link their local, provincial and regional centers, but tourism (pre-pandemic) was steadily on the rise.  The real trick is to link the region with the larger national tourist infrastructure: the Strategic Plan for Tourism that Italy unveiled for the 2017-2020 period emphasized the need to both exploit national ports of entry as well as the cultivation of ‘soft transport’ like footpaths and bicycle trails. Calabria has a wealth of both and by focusing on ‘how to get there’ and ‘how to get around’, the tourism industry in the region can start to attract people who are, in reality, much closer than they think.

Calabria may never be the hub of Italian tourism but then again, it doesn’t need to be. As long as it can link to other regions and play a part in building a national network, the region will not only boost its own profile but that of the rest of the country. There’s no reason that Calabria to Sicily, Calabria to Puglia, or Calabria to Campania itineraries can’t be developed, as long as there are national and regional networks where everyone is a player.

4. Sustainable tourism is the future, and Calabria is ripe for it

Calabria is an area of incredible natural beauty: mountains, hills, lakes, forests and over 800 kilometres of coastline mean that the region is a treasure trove for lovers of the outdoors and an ideal destination for that aforementioned sun. However, some of these natural resources have sadly been damaged by shoddy development, corruption and neglect. As locals, we groan about the inconsistency of rubbish collection and contamination of some areas of the sea, but tourists simply won’t come back if they find those things upon arrival. Moving on from the legacy of mismanagement and organized crime-led waste disposal is one of the biggest challenges that Calabria faces if it wants to not only develop a strong base for tourism but be integrated into Italy’s future direction.

Slowly but surely, however, sustainable tourism is thriving in Calabria, with villages that were once abandoned taking on a new life as ecofriendly alberghi diffusi and large scale efforts being made in agriculture, transport, and environmental protections. While the region has suffered from state neglect in the past, and this gap has often been filled by organized crime networks, there is change on the horizon and it benefits not only those of us who live here, but those who want to discover Calabria as well.

5. Young people are returing, and that’s good news for everyone

Despite the global impact of COVID-19, Calabria is undergoing a renaissance in the way that its residents view their region and the opinions that foreigners have of it. Much of this is thanks to millenials who have worked, studied or lived abroad and are returning to Italy, and Calabria is no exception. Once a place that was characterized by large scale emigration and still plagued with high levels of youth unemployment, the region is nonetheless witnessing a sea change of attitudes among its younger generations. With climate change, social justice and opportunities becoming ever more important to Italians, particularly in the wake of the COVID-19 pandemic, these concepts are becoming less abstract and more concrete.

Calabria has a rich and complex history to discover, and thanks to the creativity and ambition of young people who make the choice to either stay or return, visitors and residents alike get the chance to experience something unique and invaluable. They are also finding ways of expressing their pride and ingenuity that go beyond standard tourism tactics. Take for example the case of Rosarno, a town historically linked with poverty and crime than tourism and escape. Thanks to the efforts of people like Angelo Carchidi and his organization A di Città, the town is reviving their lost art of storytelling and in so doing, bringing the past back to life.

First-time visitors to Calabria will likely still see some of the scars of a difficult past, but beyond them (or maybe through them) there are treasures in plain sight. Tropea, Amantea, Gerace, Altomonte, Scilla, Tiriolo, Pizzo, Stilo, and Soverato are just a few starting points that will touch anyone who passes through. Wander off the beaten path into the remote and charming coastal and mountain villages, sit back and enjoy food and drink as the locals do. Browse in the bric-brac markets, capture the colours on canvas, discover a trekker’s paradise, bask in the purest seawater and freshest air. Calabria is one of those places that is hospitable yet never over-bearing, where you can let the uniqueness of the area gradually seep in gradually and lap up the revitalizing energy that makes it so special. And maybe get a little lost on the way. It’s worth the diversion because you may just discover something magical. For as those of us who live here know, Calabria may be relaxing, but it is never boring.