Why has Italy adopted a bizarre tiered system to tackle the COVID-19 pandemic? 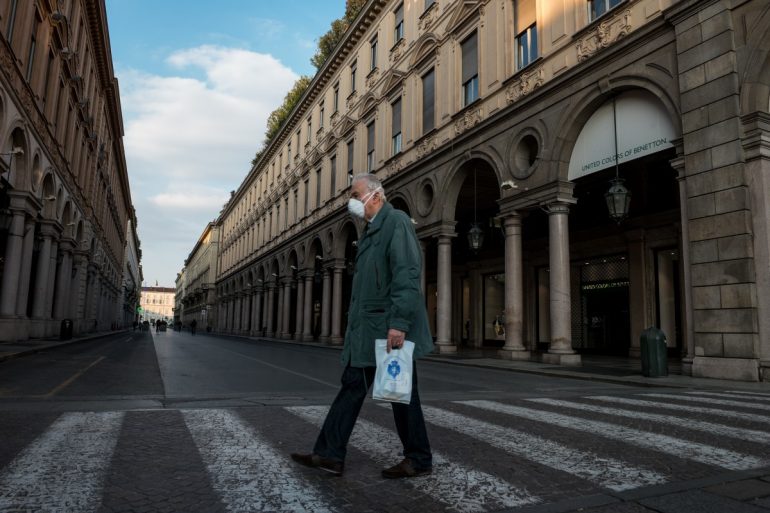 A man walks in Piazza San Carlo, Turin, during the COVID-19 pandemic.

Draconian government restrictions of normal life have become the standard global response to the COVID-19 epidemic. Right or wrong, virtually every country in Europe, the Americas, the Middle East, Central Asia and the Pacific, including Italy, have adopted a version of this paradigm by decreeing that every outdoor activity is illegal, unless expressly allowed. Commonly referred to as ‘lockdown’ — a term we owe to the American prison system — the policy rests on the assumption that the spread of the virus can be halted through a series of more or less stringent restrictions on social interactions in order to reduce infections, deaths, and avert the crashing of the health care system.

On March 11, Italy became the first country in the West to implement a lockdown on a national scale. For the past year its government, under the leadership of former Prime Minister Giuseppe Conte, has adopted a succession of on-off or semi-lockdowns, responding to each resurgence of the virus as it happened. Since November 6, it has found itself under a tiered regime in which the stringency of the restrictions are determined at a regional level on the basis of certain metrics, such as the Rt number, hospital capacity, and the number of infections. This means that whenever any one of these metrics moves, the measures are expected to follow accordingly.

In the latest decree, implemented on January 15, the different measures provided for by each tier are laid out in the form of a list. As is characteristic of the Italian zeal for precision, even at the cost of one’s sanity, the list specifies in every detail exactly what the citizen may or may not do in any given tier. It would seem otiose to go through each and every sinuous provision, but the following may serve by way of example.

In the yellow zone, two people at the most can visit a friend or relative’s house once a day, between the hours of 5am and 10pm, and only in the company of children below the age of 14 or people with mental or physical disabilities. In the orange zone this may only occur within one’s own municipality unless it counts less than 5,000 inhabitants, in which case one may travel up to a distance of 30 kilometres from its boundaries, and may not visit the provincial capital. In the red zone it is not allowed to wonder out of one’s house at all, unless for urgent matters related to work, health, or other necessities. In all three zones it is forbidden to travel across regional boundaries except for strictly urgent reasons, which are to be justified by providing the relevant certificate to the authorities.

The regime applied to bars and restaurants is similarly bizarre. In yellow zones, eating out is allowed between 5am and 6pm, to be switched to take away between the hours of 6pm and 11pm, and only if the bar or restaurant in question possesses a kitchen. Delivery is always allowed. For those living in the orange and red zones, however, eating out is always prohibited, take away is allowed from 5am to 6pm, and only from venues with a kitchen between 6pm and 11pm. In all three zones eating in parks or streets is forbidden from 6pm to 5am.

The scientific rationale behind such measures is, I think, impossible to ascertain. They are obviously completely arbitrary, and appear comical to any reasonable observer. Why not 50 instead of 30 kilometres from one’s small town? Why can restaurants open their doors only until 6pm instead of 8pm? To what degree do these differences impact the spread of the virus?

The fact is that scientific deliberation has been made into a sort of horse trade, where public health policies are made the object of a quid pro quo between expert advice and the interests of opposing political and economic factions: regional governors, national associations of provinces and communes, private and public sector unions, business associations, and the parties that form the governing coalition. Italy is indeed a corporate state, and it is no coincidence that the new Prime Minister Mario Draghi sought the support of all these factions before being sworn in as leader of the “government of the best.”

Draghi’s plan to accelerate the vaccination programme nationwide will make the prospect of an end to the restrictions seem nearer, thus rendering them more bearable to the public. The waning number of hospitalizations and deaths, and the onset of warmer months, make it unlikely that the tiered regime will be greatly modified before the end of summer. One can only hope that the vaccine is at last the final exit strategy, and that Italy as a whole will soon return to a single zone of relative normality.