Thick, Sweet, And Creamy: The History Of Nutella

Nutella reminisces a cultivated idea coming to fruition layered in decades of trials and errors. 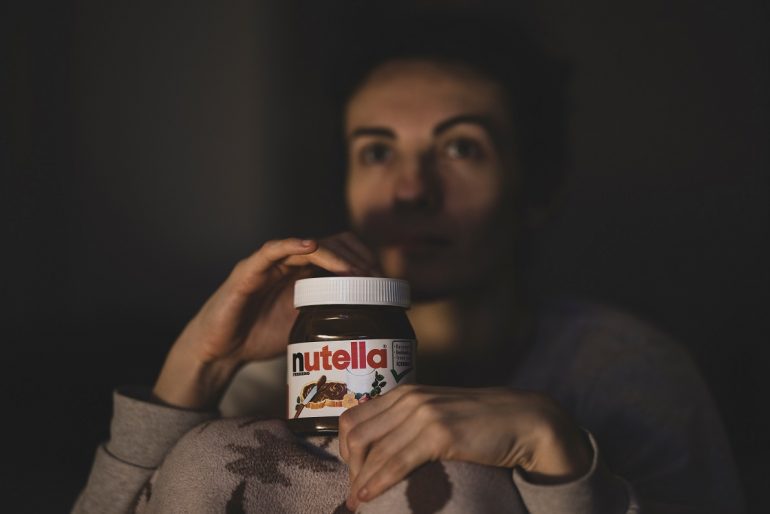 Every February 5, the global crowd posts photos of their Nutella stories on social media platforms as a way to celebrate the delectable treat. Photo by engin akyurt on Unsplash.

Thick, sweet, and creamy: the holy trinity of a world-renowned spread made of hazelnuts, the then substitute to the scarcity of cocoa and the foundation of its fame and fortune. For the taste buds that cry out for sugary delight in breakfast, lathering a spoonful of this gooey cream on toast, pancakes, waffles or a bowl of oatmeal curbs the sweet-tooth cravings. The dose of caffeine in coffee can be swapped for the spike of sugar in this jar, enough to fuel the morning study, work or routine. Before it has become a staple in every household, the history of Nutella reminisces a cultivated idea coming to fruition layered in decades of trials and errors.

At the conclusion of World War II, Pietro Ferrero, a pastry chef from Turin, the capital of the Piedmont region of northern Italy, would observe factory workers relish bread with cheese and tomatoes for their day meals and thought of creating a sweet delicacy to pair up with the savory combination. In Piedmont, the abundance of hazelnuts overflowed and the ration of cocoa cut back, drawn from the supply shortages after the war. The lost-case scenario encouraged Pietro to tinker with his creativity in elevating the foundation of his chocolate spread. Earlier in the 1920s, he had already mastered the production of pastone, a mesh of chocolate and hazelnuts, the frame of his later success in perfecting the chocolate spread.

When the Second World War commenced, Pietro closed his shop and left Turin to take refuge in Alba, bringing his chocolate mixture with him. One day after the war, he found a jar of cocoa butter and threw it in the concoction, paving a path to the creation of Pasta Gianduja, a chocolate spread with 30% hazelnut paste, the sibling of Nutella, and the legacy Pietro left to his son Michele Ferrero after he passed away in 1949. Michelle stepped in as the heir and commanded the entrepreneurship of the heirloom.

In a myth, the paste of gianduja melted on a scorching summer day, the kick-off of selling the mixture as a spread cream and Michele’s starting point of turning his father’s legacy into a creamy spread titled Supercrema. In 1962, Italy passed a rule that banned the use of superlatives for brands and products, forcing Michele to alter the name of his spread and birthing the patent of Nutella, nut from the English word to signal the potion of hazelnuts and chocolate and -ella from the Italian grammar indication of appending a positive tone and twist onto a noun. In April 1964, consumers welcomed the first jar of Nutella, the black color of the first letter disrupting the supposed all-red aesthetic, and as far as the cliché goes, the rest is history.

For over 55 years, Nutella has been taking the world by storm with around 365 million kilos of consumption in 2013. In a day, a jar of Nutella is sold every 2.5 seconds, and it uses more than 70 million hazelnuts per production with each jar containing around 52 hazelnuts, two of the long list of fun facts about the chocolate spread. Nutella, along with Kinder and Ferrero Rocher, Nutella’s sibling products, heralds the first spot as the company to employ most hazelnuts across the globe, owning 25% of the world production.

The threshold of Nutella’s popularity has reached a global reach. Ferrero Group recorded a profit of 928.6 million euros in August 2019, affirming Ferrero’s position as the 28th richest family in the world. Values and advertising have fueled the reasons Nutella has achieved its stardom. In an article on BBC, Roberta Sassateli, an associate professor of Cultural Sociology at University of Milan and the author of Consumer Culture, says Nutella personifies the popular luxury for the Italians and the world. In Italy, it veers from the traditional sweets sold in the country, treating the spread and its sibling products as modernity and an act of giving oneself a treat. The glass jar depicts a conventional but elegant shape and the white plastic cap portrays affordability and functionality, a perception of a mass-appealing product.

In the history of Nutella’s publicity, it has not yet toyed on the concepts of being the cheapest and best substitute to expensive chocolate, which would perceive it as a standout in the realm of spread, but adopted instead the essence of being all-natural with hazelnuts, a trigger that assumes the spread as slightly better than the others. It also underscores hazelnuts and milk in its ingredients, which include sugar, palm oil, hazelnuts, lean cocoa, skimmed milk powder, whey powder, and emulsifiers such as lecithin (soya) and vanillin, rather than exposing the high content of sugar and saturated fats with a total of 57% fat and 32% sugar.

While marketing may have hurled Nutella to its renowned status today, science backs up why people find the chocolate spread addicting. Chocolate, an ingredient in Nutella, contains tryptophan, an amino acid at the forefront of serotonin, the hormone that stabilizes the mood. High levels of serotonin equate to extreme sensation of happiness, treating Nutella as one of the go-to comfort snacks to munch on in times of a serotonin boost. While the health benefits of hazelnuts might be appealing, which cover a decrease in blood fat levels, blood pressure and sugar levels regulation, and reduction of inflammation, the high presence of sugar and fats undermines the hearty perks.

When Sara Rosso, a California-native writer, photographer, and business and digital strategist, visited Italy in 1994 for a student trip, she saw small tubs of Nutella on the dining table of her accommodation and tried it instead of opting for her go-to jam. Not only did her choice question why Nutella was not as popular in the US as it was in Italy after a bite, but she also founded World Nutella Day in 2007 as a homage to the chocolate hazelnut spread. Every February 5, the global crowd posts photos of their Nutella stories on social media platforms as a way to celebrate the delectable treat, showing the dedication of a global community united for a thick, sweet, and creamy cause.