The Fine Line Between Food And Medicine

The worlds of food and medicine are not as distinct as we might think. 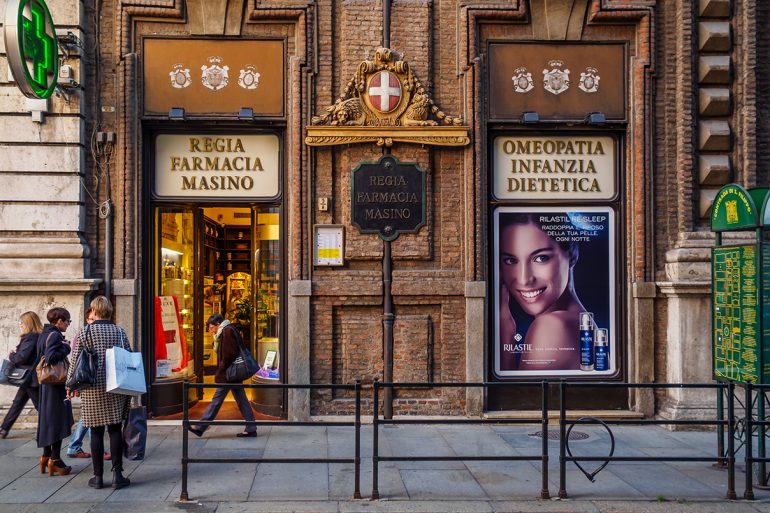 A historical pharmacy in downtown Turin. Photo by Alexander Schimmeck on Unsplash.

I recently had an exchange on Twitter with one of my few mutual followers. I had retweeted a post from Rai Cultura that contained a quote from the French poet, Paul Valéry, which had been rendered into Italian: Bisogna chiamare scienza solo l’insieme delle ricette che riescono sempre, tutto il resto è letteratura, along with an English translation: We must call science only the set of recipes that always succeed, everything else is literature. food

The person who commented on it offered something of a retort to Valéry’s assertion, saying something along the lines of: off label uses of ricette can also be considered science, so things are not as cut and dried as Valéry might have us believe; that is, the line between art and science is not so clear. The person making the comment works as a medical practitioner, so I was struck by her reading of the Italian word ricette as ‘prescription’. From my simple and highly domesticated perspective, I read ricette as ‘recipes’, as one uses in cooking. The quote works in both readings, but it got me to thinking that the worlds of food and medicine are not as distinct as we might be used to thinking.

Now we certainly see a strong connection between diet and health, you are what you eat et cetera, and this is true in both the anglophone and italophone cultural contexts. But if we look at the relation between food and medicine in the Italian tradition we see some connections that might not be so apparent in the American one.

In Italy, one can buy culinary spices and other comestible items at a drogheria. From an anglophone perspective, the word drogheria brings to mind the word ‘drug’ which is a term that is used to refer to narcotics, if one is speaking of the illegal kind, or pharmaceuticals, if one is speaking about the kind that is prescribed by a medical doctor. This is not really surprising when one considers that drogheria comes to Italian from the Middle Dutch droge vate, or ‘dry vats’, which is better understood as ‘dry goods’. So before the wide scale categorization and regulation of various commodities, it is easy to imagine cocaine and heroin being sold next to the pastry flour and chickpeas at the local drogheria, and not just in Italy but everywhere.

Cocaine was an ingredient in the original recipe for that most American of drinks, Coca Cola, as evident in the name; and heroin is in fact a generic name that was derived from a brand name, Heroin, which was produced by the German company, Bayer, a maker and distributor of various medicines such as aspirin. Also, it is well known that Sigmund Freud used cocaine. And as an Italian woman once told me, if I remember correctly, in Italy several decades ago, one used to be able to buy le spezie (spices) also at la farmacia, or the pharmacy, a word that in English is associated almost exclusively with medical and not culinary goods. In short, all of these substances were legal until they were made illegal about a century or so ago, a process that involved their division into separate categories.

But back to spices. It seems right that those coming to Italy from the Mediterranean, as well as from Asia and the New World, easily stood astride the border drawn between food on the one hand and medicine on the other, each with one foot in each field, given their stimulant properties, say cumin from the Levant, black pepper from the Malabar Coast, and chili peppers from the Caribbean. They were prized for their stimulating properties, particularly their power to aid digestion, an aspect of eating that has always held high importance in Italy, even since ancient Roman times. Digestibility is the reason why pasta must be cooked al dente, why pizza dough must be well leavened, and why pane must be ben cotto.

I was once dining with an Italian friend and his father in a restaurant in a city near San Francisco. Upon being presented with a plate of pasta with peas, still in their shell, the father speared a pod with his fork and held it up for inspection for a few seconds, before depositing it on his son’s plate with a single elegant sliding motion. As is still the custom in California, vegetables are served barely cooked, a misguided culinary tradition that is a holdover from the 1980s that absolutely forbade ‘mushy’ vegetables. In Italy, cooked vegetables must generally be cooked thoroughly. So while it sometimes seems to outsiders that Italians are a bit too preoccupied about food, their passion for it only makes sense given the indisputable importance of health including the health of the environment in which we live and which we engage most intimately through the consumption of food.

This contemplation on the relation between food and medicine, and the deceptive line drawn between them, is part of a broader project that questions the lines we draw between countless groupings and the categories to which we assign individual phenomena. While certain distinctions are clearly evident and need to be recognized, others seem to be arbitrary and not all that useful, and in fact can cause more harm than good. This is perhaps why medical science and the study of nutrition in particular is so volatile and fraught with controversy.

I still carry a feeling of shame from commenting to my Italian relatives that “sugar is bad for you,” a common line that I grew up with. We were all just tucking into a sweet, prepared by the same woman who told me about the spices at the pharmacy, that consisted of sliced apples that were coated in batter, fried in lard, and then sprinkled with sugar. It was absolutely delicious. Is sugar bad for you? No. Is ‘too much’ sugar bad for you? Yes, of course, otherwise it wouldn’t be considered to be ‘too much’. Is lard bad for you? No. How about ‘too much’ lard? Absolutely, by virtue of the same reasoning.

So, an apple a day keeps the doctor away? It certainly does not hurt.