About the woman who almost changed the course of history. 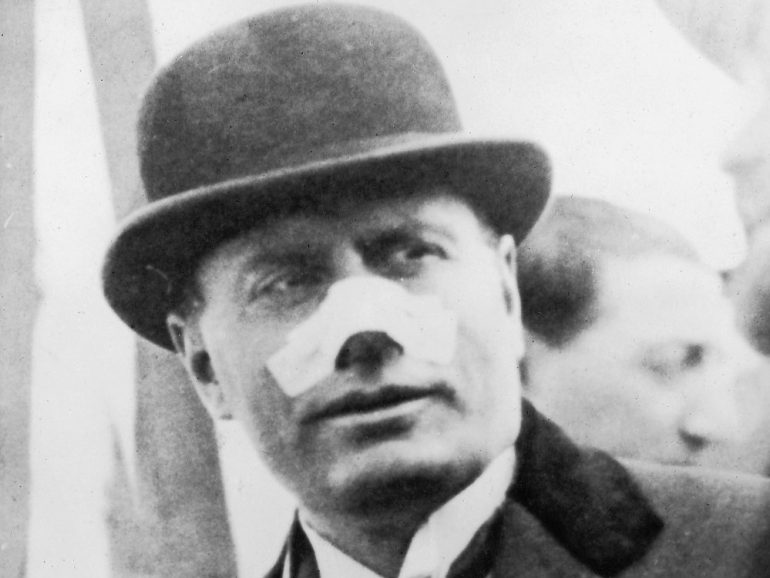 Can Violet Gibson’s assassination attempt on Il Duce be explained by her insanity? Or, could it have been something more?

Rome  April 7, 1926. For a few moments, two lives intersect and a different narrative to the course of 20th century history is missed by a hair’s breadth. Violet Gibson — a short, dishevelled Irish woman who looked much older than her fifty years — was the person who almost changed the course of history.

Dublin native Gibson shot Italy’s Fascist leader Benito Mussolini at point-blank range as he walked among the crowd in the Piazza del Campidoglio in Rome. She had armed herself with a rock to break Mussolini’s car window if necessary and carried a small revolver disguised in a black shawl. When he was in clear view, she aimed accurately and fired, the bullet grazing Mussolini’s nose as he turned to give a ‘saluto romano’. She fired again, but the gun jammed.

The Piazza became hysterical and Gibson was almost lynched on the spot by an infuriated mob. The police intervened and took her away for questioning. Mussolini was wounded only slightly, dismissing his injury as “a mere trifle” and, once his nose was bandaged, he continued his parade and reassured the throng of supporters.

It was said he made light of it because the would-be assassin was merely “a woman and ugly too.” “Imagine, a woman!” exclaimed Mussolini, aghast, at being shot. He was ready, he quipped, for “a beautiful death,” but the “old, ugly, repulsive woman” was absolutely not the kind of person he wanted to be killed by. A perfect example of Mussolini’s ability to turn a crisis to his benefit.

Who was Violet Gibson?

Who was this woman who until recently has been largely forgotten by history?

Born in Dublin in 1876, the seventh of eight children, she grew up in a life of privilege, part of the so-called Anglo-Irish Protestant gentry. At this time, Ireland was still part of the United Kingdom. Her father, Edward Gibson, was an Irish lawyer and politician. He was granted the title Lord Ashbourne and served as Conservative Member of the British Parliament for Dublin University and as Lord Chancellor of Ireland from 1885 to 1905.

Violet suffered bouts of ill-health in her youth but this did not stop her from travelling. She grew up dividing her time between Dublin and London. At the age of eighteen she was a debutante at the court of Queen Victoria. At 21 she got engaged to an artist who died a year later. Perhaps, this was her first encounter with tragedy.

A sought-after figure on the Dublin social scene, Violet practically dictated fashion mores in the city at the turn of the century. Violet’s mother became a Christian Scientist and Violet herself dabbled in the study of theosophy, a Christian offshoot popular in the late 19th century. In 1913, she moved to Paris, working for a number of pacifist organisations and travelled a lot in Europe.

Her ill-health was probably the cause of her growing obsession with religion and ritual, and her increasingly odd behaviour led to here twice being admitted to hospitals for the mentally ill. Her eventual conversion to Catholicism horrified her family and friends. Converting to Catholicism in  upper-class Anglo oriented Ireland was synonymous with degrading oneself. The saying went “a convert is a pervert.” This decision is not just about a woman converting to a new religion but a woman repudiating all that the British life-style, religion and ideals symbolized and that she had adhered to all her life.

In 1916, in her 40s, Violet attended a Jesuit retreat where she became interested in the idea of ‘mortification’, or putting to death. Evil had to be mortified. By the time she left for Rome for the Holy Year celebrations of 1925, a close friend worried that she intended to kill someone there in order to make a statement.

During her stay in Rome, she attempted suicide in her lodgings by shooting herself in the chest, but the shot passed through her ribs and ricocheted off one, saving her life. Following the attempted suicide, she remained in a convent in Rome assisted by her Irish maid, until the day she set off for the Campidoglio armed with a gun.

It is easy to see attempts to kill the Italian Fascist leader when the King of England had just awarded him the Order of the Bath and when British journalists were reporting on the merits of the “trim handsome black-shirted lads” might be seen as the act of a madwoman.

However, it could have been the woman’s willingness to make the ultimate sacrifice to save the world. When she pointed the gun, Gibson knew she was delivering herself up to the vengeance of the mob, nevertheless taking these chances. Her doctors described her state of mind as “exalted.” Violet probably read that as meaning saint-like, God’s chosen instrument, his angel of death and she went to face her punishment in this state of exaltation.

Following the shooting, Gibson was imprisoned in Rome. It was established shortly afterwards that there was no plot and that she acted alone in the assassination attempt. Mussolini did not press charges and she was handed over for deportation. On her release from the Italian prison, she showed her natural gracious manners by writing a thank-you letter to her jailer then allowed her sister and an escort of police officers and nurses to accompany her on to a train bound for England.

She was taken for observation at Harley Street Hospital in London, where having been certified as insane, Gibson was taken to a Northamptonshire asylum where she remained for the rest of her days.

In the asylum, Violet found her voice through letter writing. As well as letters to her family, she wrote to people she considered her equals, such as Winston Churchill and Princess Elizabeth, the present Queen of England. However, the letters to dignitaries remained unsent. In them she proposes plans for the ­betterment of the world, her plans almost as grandiose and ill-founded as those of the man that she had tried to kill.

The story of the attempted assassination has recently come to the public eye both in film, in prose, and in spin-off magazine and newspaper articles.

Barrie Dowdall’s docu-drama, The Irish Woman Who  Shot Mussolini, starring Olwen Fouéré, and inspired by a radio documentary of the same name, revisits the life of Violet Gibson and, in 2010, the British journalist and historian, Frances Stonor Saunders wrote a biography of Violet Gibson.

In it this work, Stoner Saunders depicts Violet’s lonely life as one of poignant inconsequentiality, the voice of the invisible outsider who, perhaps, saw things that others didn’t see. She made one hopeless effort to warn the world and save it from a dangerous man whose hold on reality was as feeble as hers but so much more consequential.

It was hoped that Gibson would be released when Mussolini was finally brought to justice. However, her mental state proved too damaged to allow a return to life outside the institution. By then, her reality was the confines of the St Andrew’s Hospital in Northampton where she died in May 1956 at 79.