Italy is doing worst amongst the EU Member States for environmental progress. The white beaches of Rosignano Solvay are a perfect example. 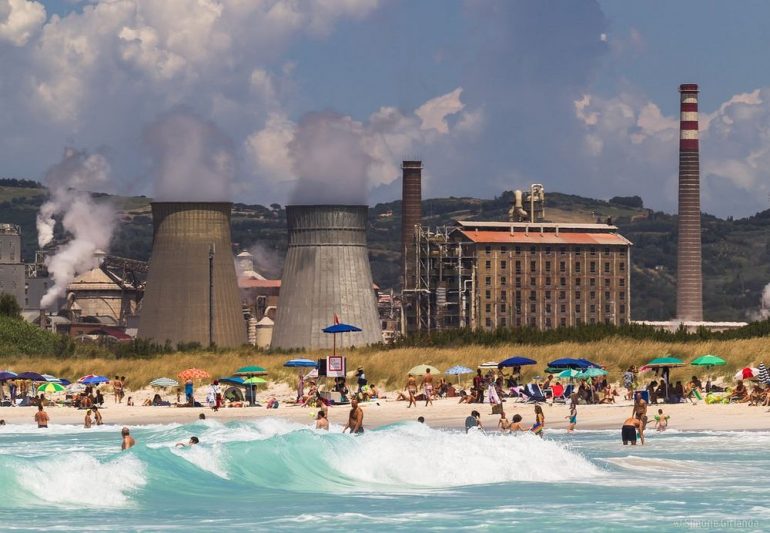 Hedge fund Bluebell Capital Partners recently began an environmental legal campaign called ‘One Share Environmental, Social and Governance Issues (ESG)’ against Solvay, a chemical company that has been operating in Italy since 1914 at Rosignano Marittimo. Solvey’s influence was so significant that a coastal area 25 kilometres from Livorno in the Tuscan fraction of Rosignano Marittimo now bears the company’s name. The beach at Rosignano Solvay is famous for its ‘Caribbeanesque’ fine white sand. However, despite Solvay’s website stating that “Rosignano’s white beaches take their unique color from natural limestone,” Bluebell retort that it is in fact due to the Belgian’s company chemical waste.

The European Environment Agency (EEA) described the three main bathing sites near Rosignano Solvay as being in an “excellent state” for at least the last three years. This does not include those located near the company site not declared to be ‘bathing sites’ as they are closed to the public.

The influence of Solvay in the area is not only reflected in the naming of a fraction after the company, but also in the local Municipality’s page on their website about its history. This webpage describes the area as a “city-garden” with curated green areas and well-kept residential buildings, located close to quiet roads, providing a haven of peace and security for its inhabitants. The company’s presence has led to the creation of greater transportation links connect the area with other parts of the region and the increase of small-medium commercial activities opening nearby, whose client base also drawn by the proximity of the ‘tropical’ beaches. Solvay has an agreement with the Italian Government that they can also extract salt in the area.

A simple research brings up a quite curious fact when comparing sources written about the area on English and Italian Wikipedia pages. Whilst the Italian site contains details about the whole history and other similar information, the English version contains a different section, absent from the Italian translated one, concerning the toxicity of the area albeit without any linked reference or referencing to a UN Report from 1999.

As declared also on Solvay’s website, the water quality is tested by the local authorities, the results of which obtainable from the Tuscany regional environmental agency (ARPAT). However, the same explanation on the ARPAT website describes measurements based on the water quality, as the EEA’s. To this point, EEA stated that “the bathing waters are quality classified according to the two microbiological parameters (Escherichia coli and Intestinal enterococci) defined in the Bathing Water Directive.” Other analysis should be carried out at national level.

However, what about the quality of the sand? ARPAT’s 2014 report identified high quantities of mercury within the bathing site judging the area to be in a poor state environmentally, similar results subsequently declared in 2017.

The coastal area is divided into several fractions. In 2019, the closest bathing zone to the Solvay’s unload waste site denominated ‘Lillatro’ was closed, remaining so to this day, for sanitary reasons. However, the ARPAT seeks to remind readers of their website that they test the soil and water periodically in light with environmental law.

It seems that although the bathing site has been closed, last summer people nevertheless bathed and visited the area, an area that in 2017 had recorded presence of dead fish lying on the coast. During that same year, nearby residents complained to the Municipality about the lingering bleach odor right before fish were found, possibly dead from contamination. Solvay declared that they were cooperating with ARPAT on the matter and that it seems to be a temporary event.

The previous year, Solvay lost a legal case against a former employee who sued the company for illness caused by overexposure to asbestos’ dust and fibres, which can cause serious health problems. A 2017 study published in the International Journal of Occupational Medicine and Environmental Health compared two bathing sites — one at Rosignano — with substantial differences in environmental pollution, concluding that whilst “this study retrospectively documents, in [Rosignano] with elevated levels of air and seawater pollutants, an excess of mortality for several chronic-degenerative diseases” there was “no direct evaluation of individual exposure to polluting agents has been performed and it is not possible to establish a causal link between environmental pollution and increased mortality.”

Bluebell Capital Partners is a London-based hedge fund launched in 2019 that has started a campaign focusing on one company a year that they believe has ESG issues; their first target is Solvay.

However, Solvay keeps informing Bluebell of the same qualifying reasons outlined in this article, Bluebell were attracted to the case by ESG’s triple A rating — a (vague) rating quantified by MSCI that certifies Solvay as a “sector leader for chemical safety, water usage, and clean tech opportunities.”

According to Giuseppe Bivona, one of the Bluebell founders, “Solvay is rated very highly by companies specializing in providing an ESG ranking which is quite revealing about the real relevance of those ratings.”

We can do more

From this framework, the green protester in me would like to declare that this company is polluting the land and that it should stop. However, although no direct and certain connection has been proved, it seems pretty clear that the whole system has put the issue on the backburner, at best.

Here on Italics Magazine, we recently discussed that Italy is doing worst amongst the European Union (EU) Member States for environmental progress and proposed projects in the Recovery Fund and Green New Deal. In Italy, stronger environmental policies and other initiatives of the sort are not viewed positively, demonstrated in the way in which we (poorly) rank environmental company standards.

Protecting our planet means creating policies that work and are coherent. The EU should be the first to create stronger ranking systems and sanctions against eco crimes.

We can do more, and we should do more.

Otherwise, all the time and effort taken to create these environmental directives, policies, and deal are simply a waste of time. We are only fooling ourselves that bigger institutions want to change, but they are truly not.