How To Truly Reform The Italian School System

Dated teaching methods and de facto barriers to entry are holding everyone back. 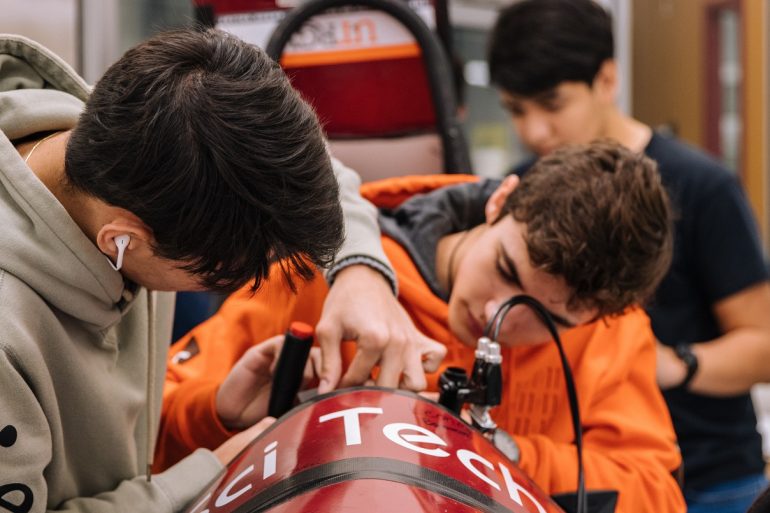 The Italian education system often fails at achieving the minimum requirements to keep pace with other advanced industrial countries. Photo by Jeswin Thomas on Unsplash.

I never learned how to write in my Italian high school. Sure, we had to do almost one tema (thematic essay) or saggio (essay) per month, but no one had actually taught me how to do it. Italian students are taught the basic rules for building an essay — five paragraphs and the use of connectors — but no one talks about effective writing. Essays are part of a box we have to tick in order to move on to the next task. It was only when a professor in my first semester at an American university discussed the mechanics of good writing that it occurred to me that I had no idea what she was saying.

Despite the fact that my high school professors repeatedly talked about the need for ‘interdisciplinarity’, the Italian curriculum is not built to foster it. Indeed it was only when I began my studies in the ESABAC program, which combines French and Italian studies in a dual degree track, that I began to understand what this term even meant. I had the good fortune to be part of a pedagogy that operates thematically rather than chronologically, but I know how rare that is for most Italian students. This method enables students to see the repeating patterns of history and draw connections with other subjects more easily. I’m sure it sounds counterintuitive to many of my childhood friends.

Though we take great pride in a humanities-based educational curriculum that should develop these skills, Italy has one of the highest rates of functional illiteracy in Europe, which a 2016 OECD study puts at 28%. Italians often consider having studied at the Liceo Classico (classics high school) or the Liceo Scientifico (scientific high school) something to brag about, and any successful student must have studied Latin at one of these bodies. But attendance alone does not tell the whole story, and the way that we learn in Italy leaves most of us ill-equipped for the challenges of a changing world.

How did we get here?

Italy’s current educational structure dates to the pre-WWII era and, while it was designed to give students a well rounded education, it has more often resulted in an elitist system that hinders, rather than fostering, intellectual curiosity. After five years of elementary school and three years of middle school, Italian students must choose the school they will attend for the next five years. As Italian high schools are divided by type and subject focus (language, science, math, etc), these barely teenagers are obligated to choose a specialization that will determine the path that their careers and personal development will take. Considering the impact that the right high school has on a student’s academic and professional future, this decision is crucial and often stressful for students and their families. As such, the pragmatic concerns — “can I get a job with this background?” — often outweigh the more fundamental questions that education is supposed to foster — “does this interest me?” or “am I good at it?”

For all that it is vaunted within the country, the Italian education system often fails at achieving the minimum requirements to keep pace with other advanced industrial countries. A 2020 study highlighted the lack of inclusiveness and effectiveness of higher education in Italy, with the consequent numbers lagging behind most of its counterparts. The antiquated protocols of the Italian education system, where children must select an educational stream at age 13 that will determine their chances of attending university and thus their career opportunities, is inadequate in an age where flexibility and adaptability are key markers of success. Students change their minds about what interests them, especially as they are exposed to new ideas, so how can we expect them to make a possibly determinant choice at 13? Both the failure to provide the tools needed to develop critical thinking and the highly specialized approach from a very young age often preclude equal access to opportunities for students and thus damage the democratic character that public education should epitomize.

Although since 1969 there are no longer formal barriers to entry depending on the type of high school that is chosen, i.e. allowing only students graduating from a Liceo to pursue a university degree, data shows that students who attended technical and vocational schools are still considerably less likely to go to university. Moreover, students from lower income families and the children of first or second generation immigrants are more likely to go to technical or vocational schools; the misconception that they are ‘easier’ paths, inevitably perpetuates patterns of inequality and exclusiveness in higher education rather than valorizing and investing in these educational systems.

Why we need critical thinking

If there is one aspect of the Italian educational system that every Italian student has come to dread, it has to be the antiquated practice of mnemonic learning. Even in disciplines like philosophy that require at least some degree of independent analysis and logic, teachers focus on the ‘drill and kill’ approach. While students in other countries, such as the United States, are encouraged to actively engage with topics and share their perspective, the Italian method remains focused on chronological and anecdotal learning, with students expected to be at the same level of comprehension based on age group. There is close to no space for individual differences, and no room for divergent opinions. This is in stark contrast to American schooling, where subjects can be divided according to aptitude (basic, advanced) and subject interest plays an important part in elective education. This continues at the university level, where professors are not perceived as distant entities who dispense knowledge, but instead as guides who look for the most effective way to help students gain mastery of a given subject.

Throughout my academic career in Italy I had to study dinosaurs, the Romans, and the infamous meme worthy tryad vassalli-valvassori-valvassini (I have forgotten 90% of high school, but the sequence vassals, vavasours, and vassals of vavasours remains) three separate times. Yet I didn’t know how to form a critical thought and represent it on paper. I would have sacrificed one of those iterations for the chance to learn how to think, and to be guided in the process. Instead I was stuck, along with millions of other young Italians, within the vestiges of a pre-war system conceived to ensure that every kid would receive at least a basic education in elementary school. Those who were fortunate enough to continue their studies could go more in depth. These days, I’m not sure how lucky we actually were.

This is not meant to be an attack on our humanity-focused tradition, for there are many elements of our system that should be preserved. Rather it is an invitation to start including classes that have a practical application in everyday life and make the most out of the 13 years that Italians spend in school. We need to change our relationship to knowledge and see it as a skill set that we acquire, instead of a series of hurdles through which we must pass. The educational system can be updated without sacrificing its foundations, and the need for a rapid digitalization of schools driven by the pandemic is an opportunity to seriously evaluate the shortcomings at the core of our education system. Italy is already starting to move in this direction, becoming the first country to make climate change a compulsory subject for students: but unless we reckon with the way that we learn, we’ll always be one step behind the rest of the world.