L’Attesa falls into that category of films that cast Italy as a place where the essential substance of life is found. 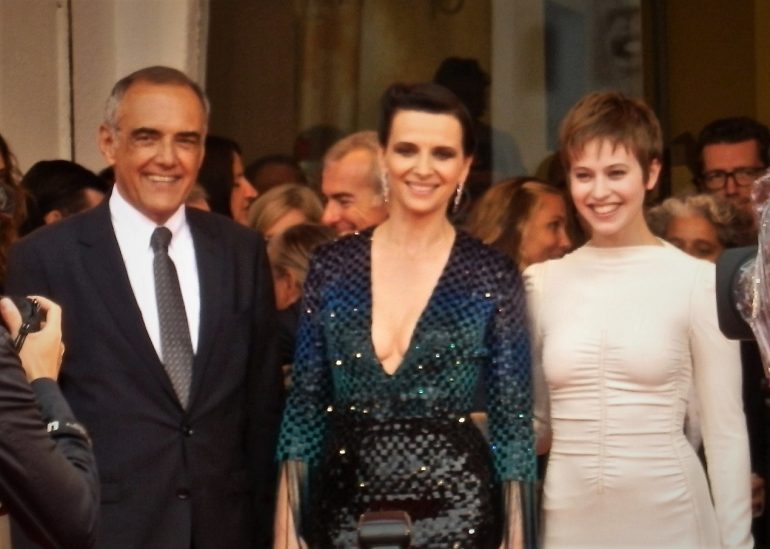 The 2015 film, L’Attesa (The Wait), directed by Piero Messina and based on a novella by Luigi Pirandello, tells the story of the difficult encounter between two French women who are in starkly different periods of their lives yet who are united by their mutual affection for a young man whose presence is only a memory. The first woman (Anna, played by Juliette Binoche) is the mother of the young man (Giuseppe, played by Giovanni Anzaldo); the second is the young man’s girlfriend (Jeanne, played by Lou de Laâge). Throughout the film Giuseppe is only a memory because he died only a day or two before Jeanne arrives at Anna’s house to celebrate Easter. I could not confirm the filming location, but Trapani and the surrounding countryside make for a good guess.

From one perspective, one could say that the film engages an enigma of Michelangelo’s La Pietà: Why is Mary depicted as a young woman, Jeanne’s age, when as Jesus’s mother, even within the logic of the traditional symbolic narrative, she should be at least approaching 50, Anna’s age? Michelangelo responded to his critics by saying that Mary’s absolute purity and chastity preserved her beauty, but I think a more analytical rather than artistic response to the question fares well also: that one should never expect the literal truth from art, even considering that the Renaissance celebrated a return to naturalistic proportions and an overall re-embrace of a faithful depiction of reality. So in Messina’s film, we get to see both the youthful and mature versions of Mary as a way of exploring grief — la pietà — from two perspectives: one maternal and the other romantic, a device that reveals a complex truth by dividing and distorting it.

You may recall a similar duality in my discussion of Italian war memorials. In that narrative, the split or compound entity is not female but male: the infant who stays nestled inside the protective matrix of the troop or the state and the youth who risks his life to guard its perimeter, a pairing that we see in the biblical narratives in the form of Jesus as both the swaddled infant and the sacrificial savior. A realistic account would provide us with depictions of preteen and adolescent Jesus, but those are absent or virtually so; we know only the essential and meaningful iterations. The Protestant reformation bestowed or restored many sound practices within Christianity, but a literal approach to interpreting the meaning of the Bible was not one of them.

One might wonder why Sicily is an ideal setting or matrix — to use that essential word again — for this story. Obviously Pirandello was Sicilian, and so author, place and theme naturally found each other, but there is more than mere biographical and geographical circumstance to be understood here. One of the features of Italian life that strikes an observant traveler is the open, frequent and sometimes banal representation of death that one sees in public spaces, perhaps more so in the south and especially Sicily but not necessarily so. All throughout Italy one will see death notices appended to a billboard as a means of honoring the deceased but also as a form of public record. In Sicily it is quite common to see more private displays, say a laminated photo mounted near the entry to a house for a young man who died in a motorcycle accident, listing the dates of his birth and death, and often accompanied by a short prayer or tribute to him, sometimes wishing him farewell in his journey.

Sociologists might say that Italy, and perhaps Sicily in particular, have death-embracing rather than death-avoidant cultures. It is not a simple binary, however, since the ways in which societies conceive and understand death matters also. In some it is a definitive end while in others it is more of a phase shift, a movement from one dimension of life to another. This is by no means a phenomenon that is specific to Italy; one need only to think of the tradition of posting white bicycles at the location of fatal cycling accidents, a tradition that is common in certain parts of the United States and other countries, to witness it in other cultural contexts, but Italy and especially Sicily seem to have an engagement with death that is particularly fluid and open-ended.

But back to the film. Interactions between Anna and Jeanne are so tense because Anna cannot bring herself to tell Jeanne that Giuseppe is dead, because she is still in shock herself. The fact that she is not native to Sicily but rather a woman who moved to the island when she married a Sicilian man, seems central to the story even though it is not addressed directly. Anna is estranged from her husband, but hovering darkly over several scenes is her gardener and houseman (Pietro, played by Giorgio Colangeli), who serves the story as a kind of Sicilian superego, a heavy and decisive conscience who firmly urges Anna to tell Jeanne the truth. But even Pietro’s efforts fall short and it is only after Anna immerses herself in the local town’s Easter rites, known as the Procession of the Mysteries, that she achieves the catharsis she needs to accept her son’s death. In this sense, L’Attesa falls into that category of films that cast Italy as a place where the essential substance of life is found, where illusions fall away and life in all of its pain and truth and beauty becomes apparent.

The biologist Rupert Sheldrake once acerbically noted that travelers to the great cathedrals and other churches of Europe, often in the form of pilgrimage, do so for a vague or perhaps even subconscious desire to find some kind of spiritual nurturance or at least discover some kind of great and important philosophical truth about life, instead, they find only site-specific lessons in the history of art and architecture, to which they dutifully acquiesce but then leave feeling somewhat unfulfilled, having gained an enhanced understanding of spandrels, for instance, but not a stronger embrace of the mystery of life. I have always found film to be an ideal matrix for this kind of feeling and experience, and especially during this time of pandemic and civil unrest, they are surely the safe and secure way to travel, not through space but through the realm of truth and meaning, which for a few dollars and an hour or two, is not a bad deal at all.