Wild Animal Politics In Cities — From New Delhi To Venice

Two ways to learn to live in peace with urban animals. 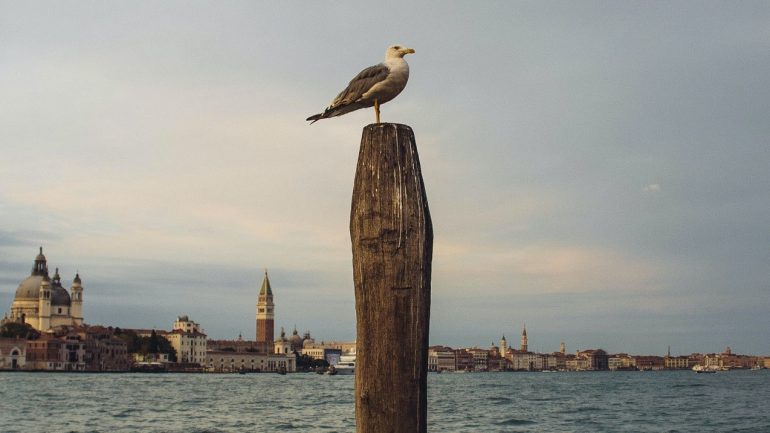 A seagull on a brown wooden post in Venice. Photo by Francesco Ceccarelli on Unsplash.

Two ways to learn to live in peace with urban animals.

When I lived in New Delhi in the early 1980s, before the city exploded with new cars and buildings, a veritable menagerie of animals co-habited there, with working elephants, camels and oxen trudging among the aging cars and trucks that streamed down the tree-lined boulevards. Along the verges, humped-shoulder brahmin cows munched on the grass or freely wandered across the streets knowing that, as venerated beings, they would not be disturbed. Around the colonial-era parliament buildings, hundreds of monkeys laughed and jeered from the big trees, which also hosted big, noisy crows. The memory of this dimension of life in India, has led me to look with new interest at the whole range of wild animals that have adapted to living alongside man in cities. Science has a name for them: synanthropes.

One suspects that at that time in India very little in the way of governing these animals was actually undertaken. Rather man just gave them wide berth and put up with whatever inconveniences they created. But in the last couple of years I have spent time in Venice, where I saw a different example, one in which city managers intervene in new ways in the urban humans-animal relationship.

Venice is replete with animals, both wild — birds and rats mainly — and domestic — such as cats and dogs. Of late, one bird has become a nuisance: the yellow-legged gull. Pushed out of its natural habitats by man, the big white coastal bird has looked to the cities as a source of food. These clever birds can be aggressive, attacking plastic bags of refuse left out on the street and swooping down on the unsuspecting tourist to snatch a panino right out of their hands. With a wingspan as big as a human’s outstretched arms, they can terrorize visitors and wreak havoc with the collection of household refuse, strewing it onto streets after their predations. “It was a disaster,” a city official told me.

Informed by the ornithological studies in 2017, Venice took a measured response in tune with the view that we do not stand aloof from nature and that our past encroachments have been damaging to us and to animals. The city, rather than, as had been done in the past, simply poisoning the animals — as had been the fate of the pigeon overpopulation — has managed the supply of food for these wild visitors by changing refuse collection methods. Venetians may no longer leave refuse in bags outside their doors. Garbage must be handed over directly to an army of collectors who come to the every front door six days a week with carts, thus never exposing bagged waste to the birds.

The gulls in response have gradually moved out of most of the city, some returning to collect crabs and shellfish in the lagoon. Others have found they can still find food in the busy squares, where tourists who eat outside are warned to be wary of attacks. But the results are a success as the overall number of birds in the city is down and the mess they left largely ended — without damaging or cruel interventions. Is this not the heart of a political solution — a compromise that both sides can live with rather than a breakdown as happens when we attempt to address differences with other inhabitants of the earth with violence?

The first steps toward this comprehensive solution had been applied earlier with pigeons. Feed sold to tourists in Piazza San Marco stopped in 2008 and feeding the pigeons anywhere became an offense. The numbers of birds gradually dropped over the following decade to a fraction of previous levels, making possible the continued pausing of long-time pigeon extermination campaigns.

The idea that we can engage in a dialogue with nature is one that was observed in Venice in relation to its lagoon when the Republic existed until the 19th century. It preserved the lagoon for centuries until modern industry began to degrade it. Now, this ancient idea has come round again, informing the relationship with the animal world and pointing a way for the future.