When Patti Smith Came to Rome

Patti Smith celebrates her birthday every year with a concert, but I remember her from a night at the Rome Opera. 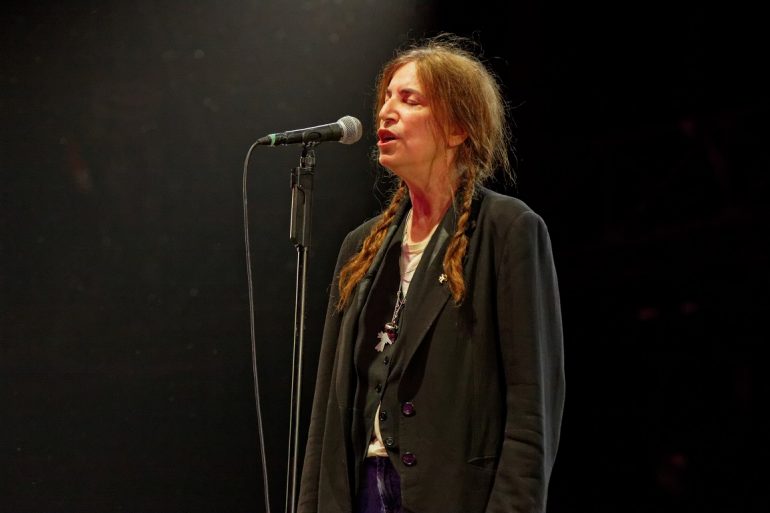 There has never been a time in my life where Patti Smith hasn’t meant nearly everything to me. When I was barely old enough to read I had memorized the words to ‘Horses’, a disconcerting set of words to issue from a child’s mouth but nonetheless a tremendously advantageous compendium of vocabulary for the rigors of preschool. I would pogo on the couch with all the energy of a five-year-old, doing the Watusi and yelling “go Rimbaud,” unaware that it was at all out of the ordinary for my age group.

Much of this was thanks to my Aunt Chris who, though only a decade younger than my father, always felt infinitely closer to my own age. She is one of those rare and blessed people who notices everyone, and who sees their possibilities even when others aren’t looking. She looked closer and in so doing saw me, an incessantly curious child who needed not just to be entertained but to be inspired. She had grown up in New York in the 1970s, a time when the gild had been replaced with grime, and everything was visceral. She would talk about Patti, Patti, Patti who was as much a part of our daily lives as any aunt, uncle or cousin who stopped by. Of course, Patti was much better than all of them; Patti was there for us. When Aunt Chris had her own children some years after me, they joined in and like me, knew no different. Even now I cannot hear “The People have the Power” without imagining Alana, barely able to walk, yet bouncing perilously on the sofa cushions and singing along with the garbled words of a toddler. It was joy then, and it is joy now.

As I launched into adolescence, Aunt Chris gave me all of her old books, a fair number of which had been damaged by water in my grandparents’ basement and whose spines cracked as they spit forward mold and must. Every name felt mythic: Kerouac, Ginsberg, Carroll, Hesse. All of them were in some way related to Patti, and through her they all seemed to make sense. Kerouac led to Baudelaire and Baudelaire to Manet; Hesse to Nietzsche to Sartre to Saint Genet but all roads led back to Patti because only she could bring them together into a narrative that made sense. They were the poets, but she was the muse.

Every time I saw her in concert I cried, the type of tears that come from a place where words, try though they might, cannot reach. Seeing her perform felt like coming home, wherever in the world I was. I watched her barefoot on an outdoor stage in some corner of the New York summer, I stood in packed clubs while she strung words together and brought them to life with her gruff yet supple voice. She was tough, so tough: her deep staccato was not harmonious or effortless and it was not her vocal range that made her so special. It was as though she had found that place where words cannot reach and she had brought it to life, painted it alive and brought it to each of us. I cried because she could take that rage that lived in me and so many others, and she could turn it into a caravan with room for everyone. Every time I saw Patti live, I saw people who all felt that same communion with her and though we shared the space, our connection to her was intimate, secret, and singular. It was less a mass and more a confession where if we did not feel absolved in the end, we felt vindicated. She is the High Priestess, after all.

At one point in my misspent youth and through a series of fortunate circumstances, I was part of a small group of aspiring poets and writers who were mentored by the late Allen Ginsberg. The first question I asked upon meeting him was if he knew Patti. He laughed. Later on, I would get to know Jim Carroll through his love for blueberry pancakes and he too would read drafts of my writing, and I also asked him if he knew Patti. Each of them, legends in their own right, reacted with equal parts reverence and vigilance. They were protective of her and though she may not have needed it they kept her safe from intruders.

So what is it about Patti? If you don’t know her you will by now be absolutely befuddled if you have not already stopped reading and if you do know her the question will be moot. For decades, Patti Smith has floated just on the edge of the zeitgeist, popping up beside Bono or Michael Stipe or Bob Dylan and perhaps momentarily eliciting curiosity from those who reside firmly in the middle. If you’ve only seen her in those moments, she may not have touched you in any particular way. If however, you have entered into her world or felt her enter yours, you know that she is equal parts singer, performer, writer, poet, activist, and warrior. She is that thing that we seem to have in painfully short supply these days. Patti is an artist.

Patti Smith is simultaneously unbreakable yet achingly fragile, beautifully and resoundingly human. She has grown older not just gracefully but with an almost pious dignity, achieving the beatitude that so many of the poets she evokes did not live to see. It is that grace which makes her so touching now, as the raw power of her punk rock years has given way to a more tender reflection that we all share with her, each of us in our own way. The grace that made her stumble before a Nobel prize audience, and made the audience cheer her on as she composed herself to continue. Because you see, she has always composed herself to continue and we have continued along with her. Hers is a hard-fought battle, and her bravery is hard-won from it. Patti is brave and above else, she is kind. And she makes us braver, and kinder.

Today is Patti Smith’s birthday and like all years for longer than I have been alive, she will be in concert, though it will be streamed from her studio because this year is nothing like any year you or I can remember. But Patti will be there, constant and consistent, connecting with everyone despite the distance and the dystopia. I have seen her birthday concerts before and while this one will remind me of the collective trauma that we are all suffering, it will also remind me of how much I have sought refuge in Patti Smith and how often I have found it. I am not the only one.

But on her birthday this year, I have thought more than anything about the last time I saw Patti. When I saw that ‘Patti Smith, an Homage to Rome’ was being advertised at the Rome Opera, I thought it might have been a mistake or that there was maybe a dive bar that had taken a cheeky name. But indeed it was Patti, joined by her daughter Jesse on the same stage that Maria Callas exited in haste one winter in 1958. As I entered the ornate lobby it felt like a joke that we might have all shared, a story that would begin with leather pants and combat boots and end with a series of cinematic mishaps that would see us misfits finally teaching those stuffy aristocrats how to loosen up. But it also felt right, it felt quiet and sacred and somehow fitting for this long journey we’d both gone on: I in my own way and on my own strange terms and Patti in hers, unaware of how much she meant to me through it all. So there would be no Watusi and no pogoing this time around, but maybe that was alright. Maybe it was ok to be a bit older, even if we’d always be just kids.

When I got to my seat the first thing I did was call Aunt Chris to tell her where I was and with whom: all I had to say was Patti. She started crying immediately and so did I because those miles and miles that separate us are also the places where words cannot reach, the places where I know that she will always see me, where she will always find me. When Patti took the stage I looked around at all of the faces sitting in those lush opera seats and I saw many of them crying as well, and we all smiled at ourselves and each other. Patti and Jesse played acoustically and the opera house walls seemed to embrace her voice and make it softer, more powerful and poignant. Patti told stories about the many times she’d spent in Italy and how special was to her, and the part of me that always spoke to her whispered, “Patti, I knew it. I knew you’d understand.”