Each can teach us a lesson in how heritage can be saved or be lost to time. 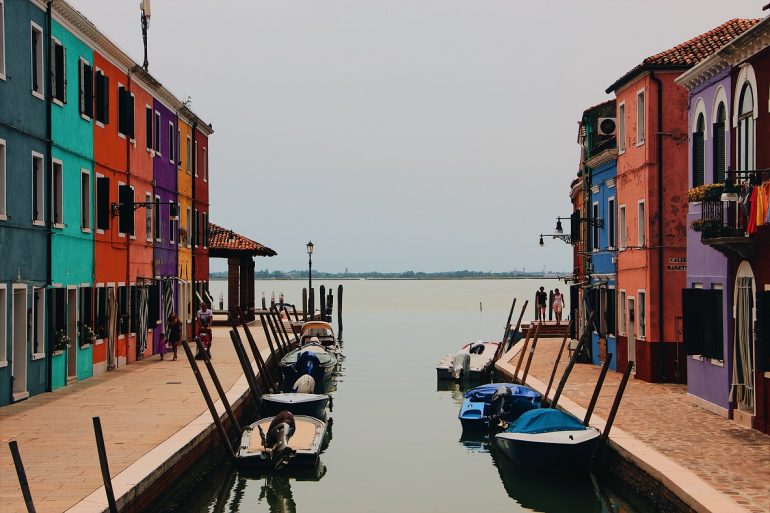 The island of Murano in the Venetian lagoon. Photo by Mael BALLAND on Unsplash.

Each can teach us a lesson in how Venice heritage can be saved or be lost to time.

Over 60 islands are spread over the 552-square-kilometer lagoon surrounding Venice, ranging from tiny hillocks of grass twenty paces wide to populated outposts. The built-up islands like Murano and Burano are on tourist itineraries, while far-flung islets like Poveglia, Lazzeretto Vecchio and San Francesco del Deserto, barely register. But they should, for they are like members of a family. They share in Venice’s fate, and each has its own intriguing story and provides an example of how heritage can become part of the present — or be lost.

The eleven inhabited islands — including Murano, Burano, Sant’Erasmo, Mazzorbo, le Vignole, San Lazzaro degli Armeni, Torcello, and a few others owned privately — have experienced the changes of the last half century in contrasting ways. Whereas Murano, a large island near historic Venice, thrived into the late 20th century as a center of glass-making, carrying forward this trade from early Republican Venice, by the new millennium the industry was a shadow of its former self, with the post-industrial toxins leaving areas unusable. A small number of artisanal glass-makers carry on.

Burano, similarly, once had a lace-making industry, and its frills and curtains were in demand among the aristocrats around Europe. Since the middle of the last century, the trade has fewer and fewer practitioners. Now, apart from a handful of elderly women who sew for the tourists in the lace museum, Venetian-made lace is a memory. Like Murano, a shrinking local population lives on the island often overwhelmed tides of tourists — at least when Covid-19 is not keeping them away. So it is with Torcello, whose handful of inhabitants daily host thousands of tourists who visit the twelfth-century Santa Maria Assunta or dine at the restaurants. The flood of money, along with the erosive effects of mass tourism, have been rising on these islands, contributing to depopulation and degrading of the lagoon environment.

The largest island, Sant’Erasmo, is mainly agricultural, providing vegetables and its famous artichokes to the city. But it is not immune to trends, with its dwindling community down to 650, mostly older, residents.

The other 50 islands or so are those that are either currently abandoned or once abandoned and then restored to life. The great majority were settled centuries ago, hosting the scores of monasteries and nunneries that blossomed there as early as they sixth or seventh century, even before Venice became a republic. Over the ages, many were shut down, then re-opened as different Christian orders came and went. The institutions came to the lagoon for the isolation and tranquility, but did more than religious service — providing a pressure valve for men and women who did not find places in the social order, retired due to old age or were sent there by families — not always willingly — to protect inheritances by limiting the number of offsprings who married.

After the end of the Republic in 1797, Venice’s conqueror, Napoleon Bonaparte, coveting their power and wealth, shut down most of the monasteries, and today only two remain on the islands: San Francesco del Deserto has been a Franciscan monastery since the 14th century. Today it remains a place of seclusion for several elderly monks in one of the most peaceful corners of the lagoon, though it is now surrounded by a tall chain-link fence to keep away unwanted visitors. The other island monastery is San Lazzaro degli Armeni, a place of Armenian study and training, preserving the nation’s embattled culture since the eighteenth century.

Many islands were for times taken over by the military, including the historic Lazzeretto Vecchio and  Lazzeretto Nuovo, which had been used during the bubonic plagues as quarantine islands. Among first places where isolation was used as tool against infection, the two islands’ many ancient warehouses and residences are being renovated as part of a new Museum of Lagoon Archaeology.

Among the formerly abandoned islands, are many undergoing a revival. Certosa, with its marina and parkland is destined to become a new ‘quartiere’ of the city. A few privately owned islands come and go on the market for the super-rich, like Crevan, and the bigger ones have become hotels. The latter includes the newly named Isola delle Rose, host to the seasonally opening J.W. Marriot hotel, and nearby San Clemente, now a Kempinksy Hotels-run luxury resort. The latter had been the site of an insane asylum as was San Servolo, now serves as a hoe for the Venice International University. They asylums were all shut down in the face of protests against warehousing the mentally ill in the late 1960s, and lay unused for long periods before being re-purposed.

But the largest number of islands, from dots built as part of the military defense necklace around historic Venice, to Poveglia, a former aslyum whose ruins have become favorite film location for horror film makers, are slowing being reclaimed by the lagoon, being washed away, covered with brambles and returning to nature from whence they came.