The Last Italian Immigrant To Argentina

Italy through the eyes of my grandfather, who left his village for Buenos Aires in 1959 — but never really left. 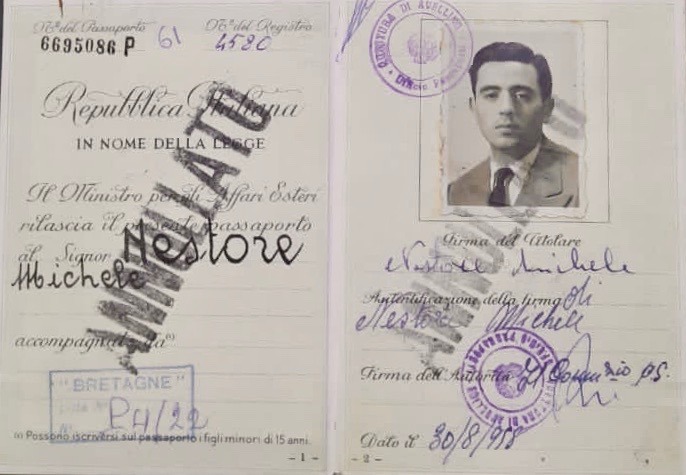 My granfather's passport when he arrived in Argentina.

“When we got to Salerno I wanted to get off the ship, but they didn’t let me. I was there and I had to stay on, they said. And so I went. It took us a month to get to Buenos Aires.”

My grandfather’s voice on the phone was distant, as I cycled down to the city center on a crisp autumn afternoon in Cambridge. Every time we got on the phone he would start reminiscing about his experience as an Italian immigrant in Argentina — the last Italian who left for South America, as he mockingly called himself.

Having waved goodbye to the motherland in 1958, he was among the last of those who traveled across the Atlantic before Italy’s economic miracle. The history of Italian migration to Argentina is a well-known and is generally regarded as a positive example of cultural integration, with the bond between Argentina and Italy being arguably among the strongest cross-cultural ties of last century. The descendants of those migrants who were granted Italian citizenship at birth, such as myself, grew up hearing stories of neighborhoods in which only Italian dialects could be heard, of unending trips on crammed ships, and of the voglia di tornare — the longing to return to Italy.

My grandfather was born in 1929, under the regime of Benito Mussolini. He left his native southern Italian town of Solofra, Campania, after experiencing Fascist schooling, years working in leather tanneries in Naples, and military service in Sardinia where, as he told me years later, he finally learned how to read and write in standard Italian, as opposed to the regional dialect. Driven away by the lack of working opportunities and future prospects in the post-World War II country, he reached a foreign city that was not at all like the promised land he had imagined.

“Living here after growing up in a small Italian village was not easy. I was used to a different kind of life, coming back from the tannery and going out to see my friends and relatives in the piazza, here I had to work harder and barely knew anybody. For the first few months, all I did was work in exchange for a place to sleep. I was not given a salary.”

It was during the first months of hardship that his longing for the country he had left behind took hold, something he found himself living with for the years to come. Months later he managed to get a paid job and settled in south Buenos Aires, where he got married to the granddaughter of an Italian couple who had migrated from Irpinia — the region he himself was from — during the first wave of Italian migration in the late 19th century.

The neighborhood where he moved, Villa Diamante, was as familiar as it could have been, its residents originally from Solofra like himself, with echoes of Campanian dialect resonating across the streets and the smell of tanneries wafting through the air. Solofra is still among the biggest industrial poles for the treatment and manufacturing of leather, a trade that its migrants imported to Buenos Aires along with their traditions and culture. Despite having lost part of their market to foreign producers, some of the tanneries originally founded by Italian migrants are still active today in Argentina.

In a similar way, families of Italian descent, especially the second and third generations, preserved Italian culture and mannerisms even long after Spanish became the main language for most of them. Italian recipes were passed down from one generation to another, and my grandmother, despite being a third-generation migrant, still cooks the same type of food my grandfather would have eaten back in Italy.

A number of recreational clubs and societies were founded by Italians in Buenos Aires, among which the Club Avellino and the Club Deportivo Italiano. “Every Saturday my father would take me and your uncle to watch the Club Deportivo Italiano, who currently play in the Argentinian third division, along with other Italians; your grandad became a lifetime member,” my father told me. He, like most of the children of Italian migrants, supported the club and regularly went to watch them play.

It wasn’t just a passion for the Italian football club that held the immigrant community together. San Michele, the patron saint of Solofra, became also the patron saint of the neighborhood, with celebrations held every year “just like they celebrate it back in Italy,” my father added.

In spite of all the ways in which Italians recreated their communities and traditions in Argentina, nostalgia for his native town and country permeated every conversation with my grandfather. He, as well as other Italians I have met in Argentina, longed for a country which, as I realized while living in Italy, no longer exists. They became notably more Italian by being so far away from Italy, getting more and more attached to their memories and traditions in ways that went far beyond what people back in Italy felt at the time. The country they recreated in their daily lives was exactly the one they left decades ago: extended families gathering every Sunday, the Church, Fellini and Vittorio De Sica, the Communists and the Christian Democrats, and the Americans saving the day.

My grandfather recreated this untainted Italy in his daily life, with the Corriere della Sera being delivered every day to his door, which he read after meticulously stirring the coffee in his moka pot, its scent filling the room. Italian opera could be heard coming from the kitchen as he sat watching RAI Italia, the international channel streamed in Latin America, telling his relatively uninterested Argentinian grandchildren about a culture and heritage so faultless that I, years later, have come to feel like mine.