The Truth Behind Vasco

The strange cult of the singer seems set to continue unabated. But what is the secret of his success? 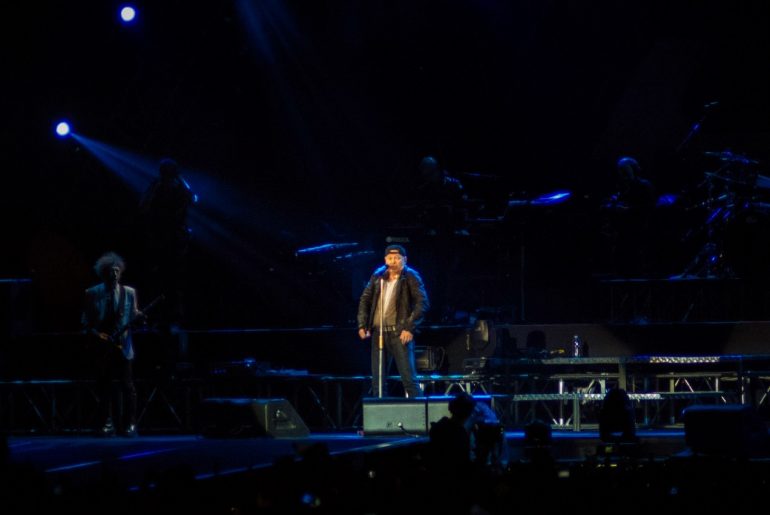 Vasco Rossi during his 2013 concert in Turin. Ciro, CC BY 2.0, via Wikimedia Commons.

The strange cult of Vasco seems set to continue unabated. But what is the secret of his success?

Whilst largely unknown abroad, since the 1980s Vasco Rossi has without doubt been one of the most consistently successful Italian rockstars. Widely ignored, if not hated, by his critics, yet worshipped by his fans, Rossi represents — no pun intended — a rock-solid cornerstone in modern Italian music and culture. Let’s dig deeper into the strange phenomena that is Vasco-mania.

Known simply as Vasco, or perhaps Blasco — people are still wondering about the nickname, although legends point out that his grandma had the idea, Vasco Rossi was born in 1952 in Zocca, a small town in the mountains surrounding Modena, Emilia-Romagna. As the son of a truck driver and a housewife, the young Vasco sought to surpass the potential boundaries set by his humble beginnings going onto, for example, establish Punto Radio in 1975, one of the first private radio stations in Italy. Enthused by these early forays into the musical world, during these years Rossi moved to Bologna whereupon he quickly became immersed in the scene. The rest, as they say, is history, and since then he has experienced many a triumph whilst managing to transform personal setbacks into a source of inspiration for his divisive lyrics.

Putting himself on the map

During the 1980s and the 1990s, Vasco stepped rapidly into the limelight on a national scale, acquiring intense popularity amongst a fiercely devoted fan base, every part the pioneering golden boy of Italian rock. Such stellar admiration would prove to be a strange destiny considering that in the he limped to last place in the 1982 Sanremo Music Festival, unanimously berated by the critics. However, whilst brusied and battered by the barrage of criticism greeting his inglorious debut, Rossi would return to the festival in 1983 in a moment that proved pivotal for his career at a national level, his song Vita Spericolata (Reckless Life) still considered a hit to this day.

Having confronted his critics and emerged victorious against stacked odds, Vasco’s popularity sky-rocketed in the late 1980s, his vivacious songs enthralling an increasingly electrified, impassioned fanbase. The dream appeared to rapidly plunge into a nightmare when he was police arrested for cocaine possession, resulting in a three week custodial sentence. Yet this proved to be minor hiccup, Rossi rapidly recovered and rose once again.

Vasco’s tremendous popularity was increasingly backed by some eye-watering numbers and statistics. 70,000 people attended his concert in 1990 when he performed in Milan, seemingly the only Italian singer capable of snapping at heels of juggernauts like Madonna and U2 that regularly packed stadiums and arenas, yet unlike them he did so crucially performing in Italian in stark contrast to the musical world he inhabited. In 1998, he returned with another performance in front of 140,000 fans, their numbers increasing year on year, some 400,000 attending his 2004 event in Catanzaro, Calabria, at a remarkable free event critics trumpeted as “An Italian Woodstock.” Rossi returned once again following a brief retirement in 2011, at a maxi-event on his home turf at Modena in July 2017, the more than 220,000 fans that attended the concert dwarfing the population of the city of Modena that stood at ‘only’ 186,000.

But how has all this been possible? How did Blasco manage to gather thousands of fans at his concerts? And, why do people even go on a pilgrimage to his house in Zocca? What explains this Vasco-mania?

There is a certain degree of wooliness when talking about Vasco. Many people may believe that his innately poetic nature and talents mean that his songs “blossom like flowers.” In that sense, fans may think that he is an artist. But the truth of the matter is that Blasco epitomizes an icon that manifests a particular way of life. As a pioneer of rock in Italy, critics have long been linking him with the rock-god scandal triad: sex, drugs, and rock and roll. In that sense, he and his lyrics embody the archetype of a rockstar.

However, it is important to acknowledge other factors belying his dizzying fame. Vasco represented a ‘prophet’ for successive generations of dispirited youngsters that grew disillusioned during the 1980s and 1990s. It is clear as day that songs like Una Vita Spericolata (A Reckless Life), Vado Al Massimo (I Go To The Max), and Siamo Solo Noi (We Are The Only Ones) are targeted a specific fanbase. Vasco Rossi took the feelings of rage, disillusionment and disappointment that pervaded the lives of many Italian youth, infused them guitar riff and transformed them into inspiring, uplifting powerful ballads. His unapologetic and public involvement with excess garnered modern-hero status, whose concerts weren’t only sermons, but bombastic expressions of a new collective world view: a perspective that deemed life and lives to have worth, heralding the emancipation of the people from constraints, limits, and oppressive rules imposed on them by society at large.

Moreover, whilst Rossi reached the zenith of his popularity during the 1980s and 1990s, he has managed to not only survive but prosper amidst the changes in musical trend changes of the last two decades. It is not by chance that after a career spanning over 40 years, the Vasco Rossi show still goes on, an iconic figure and one of the most popular singers in Italy even in 2020.

Why is he still popular?

Perhaps, behind the real Vasco-mania, there lies peoples need to follow a modern prophet who has the ability to powerfully and emotively express their feelings, and Rossi has a unique ability to be able to speak to his fanbase sincerely. Whilst many people may not like him nor his music, we should give him credit for providing a voice for an entire disillusioned generation with all its feelings and desires for escapism. Furthermore, he still manages to address people in his own terms on theirs, without being artificial, an enduring quality that, in a world where fans perceived stars as being untrue to themselves, is an endearing characteristic to possess.