The rising number of terror attacks in Europe during the pandemic calls for renewed interest in the topic, and Italy might have something to teach in this regard. 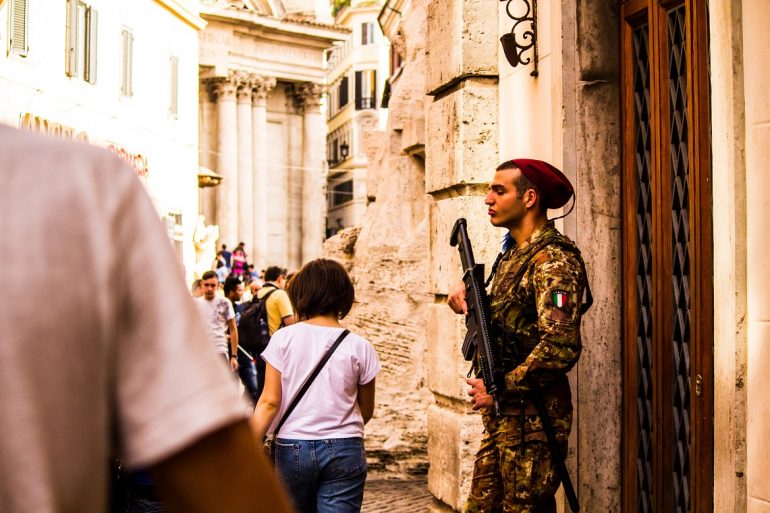 A soldier in the streets of Rome. Photo by Eve Woodhouse on Unsplash.

Around 2016-2017, I personally experienced a period of life during which I hesitated to get on a plane and go abroad, but also to visit big cities and take public transports. Unlike today, there were no travel restrictions, nor border closures or pandemics. However, I was afraid of finding myself among huge crowds of people in airports, subways, or shopping boulevards. Some people may find it hard to remember the reasons behind it, due to the incommensurability of that situation with the one we are actually living today. Nevertheless, it’s something that will not disappear with vaccines, or that will be solved without the coordinated efforts of human beings: the threat of Islamist terrorism in Europe.

On December 1, five people died in the German city of Trier after a car drove into a pedestrian zone in what resembled the terror attacks which took place at the Berlin Christmas Markets in 2016, and on the London Bridge the following year. Luckily enough, there is no evidence of a terrorist or religious nature around the Trier attack, but it comes right after other two major terrorist events in France and in Austria.

Therefore, the Covid-19 pandemic seems to have not staved off the terrorist threat in Europe. The two phenomena may also have mutual influence, as it seems to be the case for the Vienna attack, which happened the night before lockdown restrictions were put in place in the Austrian capital. Finally, both can also affect mental health in very different ways, although the pandemic has a persistent nature, while terrorist attacks are one-off, unpredictable events.

As an Italian living in Italy, I am kind of (positively) surprised by the fact that Islamist terrorism has not yet directly threatened our country. The debate around it seems also to be negligible. In the national political discourse, the terrorist threat has been recently used by politicians to warn against irregular migration. Local authorities confirmed that the attacker who stabbed three people in the Nice Cathedral last November, arrived in Italy illegally by crossing the Mediterranean. However, there is little evidence that irregular migration and terrorism are intertwined. Also, the alert level in Italy had already been raised in 2017, when a van was driven into pedestrians in the Ramblas of Barcelona and, as a response, concrete barriers were put in the most crowded boulevards of city centers to reduce the risk of vehicles hitting pedestrians.

Some common explanations behind a supposed Italian exception point at the fact that migrants in Italy are not marginalized; that the Italian intelligence has considerable experience in counterterrorism; that Islamic centers cooperate with the authorities by signaling potential extremists; and finally that Italy hasn’t a burdensome colonial past — at least not comparable to that of France or the United Kingdom. Each argument turns out to be very controversial. Italy could be an obvious target because of the Vatican. Plus, the openness of Italian society towards Muslims (and migrants more in general) is debatable. The peripheries of biggest Italian cities such as Rome, Milan or Turin are witnessing an increasing segregation of migrants. Moreover, Germany did not have a colonial past, and yet it has suffered multiple jihadist terror attacks.

The most convincing thesis seems to be that in support of the Italian intelligence, which developed its counterterrorism expertise between the 1960s and the 1980s — the so-called ‘Years of lead’. This was a period of social and political turmoil marked by a wave of both far-right and far-left episodes of political terrorism, which culminated with the 1980 massacre at the train station of Bologna. Besides that, Italian law enforcement and intelligence agencies have recently gained more substantial experience in the fight against organized crime. One of the most powerful tools available to the Italian counterterrorism is the size of the police force, the biggest one in the European Union, allowing to control the territory and to detect possible threats effectively. However, this wouldn’t be enough without the cooperation between different forces and institutions.

For this reason, in 2004 the Italian Ministry of Interior created the Anti-terrorism Strategic Analysis Committee (Comitato di Analisi Strategica Antiterrorismo – CASA), which has the task of facilitating the sharing, circulation, evaluation and quantification of information related to internal and external terrorist threats among the various police forces. This tool has proven to be particularly useful in strengthening the cooperation between the actors involved in counterterrorism activities, and at the same time in instituzionalizing the culture of the national security system originating from previous experiences in the fight against domestic terrorism and organized criminal groups.

The Italian system, in this way, has been predominantly focusing on the prevention side of terrorism. Thanks to the introduction of specific laws, it is now possible to identify, convict and deport foreign fighters to the countries of origin, as well as people involved in the organization and financing of propaganda activities — the so-called ‘lone wolves’. Another existing means to prevent radicalization paths is the effective cooperation between the authorities and Islamic associations and communities, established in 2017 through the National Pact for an Italian Islam.

This year’s governmental report on security intelligence policy reveals that the Islamic State and its galaxy of affiliated organizations still constitute a dangerous threat for our country. Italian intelligence authorities detected the presence of individual radicalization paths and more structured extremist networks which proselytize initiatives, retaliation by the IS, and other propaganda activities in collaboration with foreign groups.

Nonetheless, the number of foreign fighters attributable to our country only amounts to 144, one of the lowest in Europe, especially compared to France, which counts about 1,900 homegrown foreign fighters. The report also confirms that irregular migration channels are not currently used to send jihadists in Italy.

These are just some of the reasons why most terror attacks on European soil took place in France, where instead intelligence revelead its flaws. Coordination is the elephant in the French room, as until recently there were six different intelligence units reporting to different ministries not sharing their databases and not able to react quickly. The same is true for the Belgian system, unable to detect the Bataclan attackers hiding in Brussels for months, before bombing the Zaventem airport and a metro station nearby the EU institutions in March 2016. The Belgian problem stems from the cultural and administrative division between the French and the Flemish-speaking regions, resulting in the consequent fragmentation of national security agencies.

Cooperation at the European level cannot but be even more complex. However, for once Italy might have something to teach its European neighbors, as success in counterterrorism cannot prescind from coordinated efforts the national and international levels.