Gianmario Strappati, Ambassador Of The Tuba

Gianmario Strappati is a young and talented musician. Born in 1999, he has already performed in important festivals and concert halls around the world. 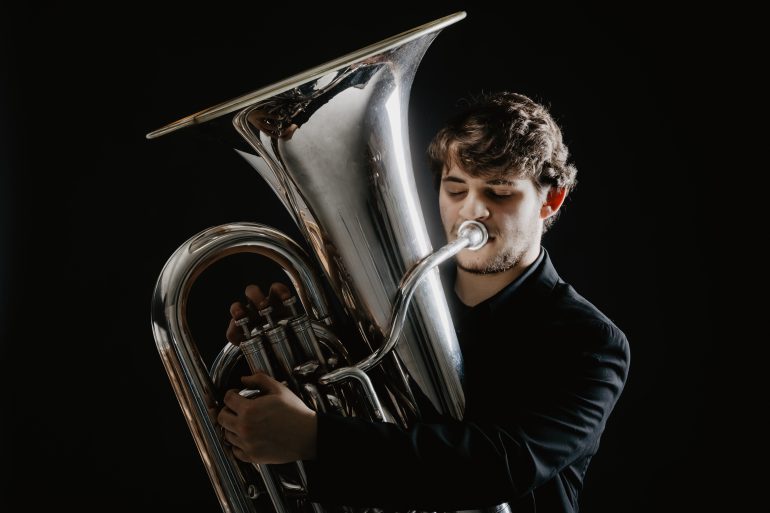 Gianmario Strappati, born in Ancona in 1999, is a young and talented musician. He has already performed in important festivals and concert halls and is currently teaching online master classes to students all over the world. He has also published a book (La tuba in una mano) to share his knowledge and passion for the tuba.

First of all, I would like to ask you, musician to musician: why the tuba? This instrument is not among the most popular ones and it is not usually associated with solos.

I fell in love with my instrument when I was three. I used to watch a cartoon with a fun brass band: the instrument that dominated the scene and sparked my fantasy was the sousaphone, a big and imperious American tuba with a deep and mysterious voice.

Since I wanted to play that instrument so much, I would draw it again and again. My teachers then complained that I didn’t sketch any other subjects: so I drew a beautiful prince charming in his castle… playing a big silver tuba.

You are a young musician but, nonetheless, you have already played in prestigious events and concert halls all around the world, such as the Wiener Saal of the Mozarteum (Salzburg), the Bachmuseum in Leipzig, the Sala Verdi in Budapest, and the Tchaikovsky festival and museum in Votkinsk (Russia). How have you managed to achieve such important milestones?

My greatest desire has always been that of performing as a soloist, accompanied by symphony and chamber orchestras. With my tuba, I actually wanted to reach that agility and those kinds of virtuosisms that you need in order to play musical pieces such as Paganini’s Caprices, The flight of the Bumblebee by Korsakov, and so on.

On my journey, I met musicians and conductors who believed in my project and offered me to play in the concert halls and festivals that you mentioned. I have also had the pleasure to teach master classes and to play with orchestras and in duo with pianists, touring in Germany, Spain, Slovakia, Greece, Montenegro, England, Finland, Hungary, and many other countries.

Last November I opened the fifth edition of the international brass festival in Albania, with a world premiere performance of a piece for solo tuba written by the Australian composer Alan Holley.

You received the Premio Nino Rota in 2015 when you were only 15, but this is a renowned award that you ‘have in common’ with Katia Ricciarelli, Lelio Luttazzi, Joseph Horowitz, and other well-known artists. What does it mean to receive such a prestigious award so young? And how has life changed?

The musicians who I had the honor of meeting taught me that the greatest talent can only be expressed through constant work and research. Indeed, we can truly express our potential thanks to the knowledge we have gradually acquired on pedagogy, technique, and interpretation.

I can still recall the intense emotion that I felt the night that I received the Nino Rota prize in Cava de Tirreni: many great artists have received it, and it marks an important moment of my musical life.

You are a young professional of the classical music scene and your activities include also masterclasses in various countries around the world. Do you think that Italy provides a breeding ground for young musicians, or you feel that classical music is more valued abroad?

In Italy, we have numerous musical institutions of high culture and tradition. There is an admission exam and the educational offer is very rich. Our students are competent and appreciated worldwide. In addition, many young people from all over the world come to specialize in our conservatories.

And how is the overall status of Italian music more in general, in your opinion?

I believe that every musician should aspire to an international path and to enrich themselves through various experiences.

Our country is a cradle of art and culture: nevertheless, it doesn’t always manage to offer younger generations the spaces and prospects which are necessary to work as a professional musician. So, I would advise anyone who wants to work with music to explore not only the opportunities available in European countries, but also in other continents.

Speaking of spreading our music, you are also Ambassador of Don Bosco Missions for the music in the world. In particular, you are embracing the cause of spreading music as a way of bringing joy and helping kids socialize. Can you tell us more?

The Don Bosco Missions want to share the message that music has an important social function among young people: the saint founded many marching bands that represented a great educational opportunity and a way to bring youth together.

Salesians, Nuns, and secular coadjutors from all around the world help make the missionary dream of Don Bosco a reality: they spread their educational work with special attention to the more vulnerable and alone. I invite everyone to visit their website to research the different projects that the non-profit organization started.

Leaving the music aside for a moment, you had the chance to travel the world since you were very young: how is Italy as seen from abroad?

Being Italian in a way means being ambassadors of our culture, art, cuisine, and traditions, which are admired and respected everywhere.

Our country is also a country of many nuances and contradictions at the same time. It is a land that is on a constant route of self-discovery. Genius and recklessness, as well as solidarity and altruism, intertwine. I met many compatriots around the world and in their eyes, I caught a glimpse of our Italian sky. Their lips told me of a heart that still dreamed about our tricolor.

I would like to conclude with the theme of the future. During these hard months marked by the pandemic, you have not given up and you have toured ‘virtually’, speaking and playing on numerous radios and televisions. What are your plans for the future as soon as it will be possible to travel again and go back to concert halls?

At this particular time, I had the pleasure of performing on streaming concerts and of teaching masterclasses online in conservatories, universities, and musical institutes in Bolivia, Argentina, Venezuela, Albania, Kosovo, Brazil, Uganda, Honduras, Mexico, Peru, Costa Rica, Chile, and I have been interviewed by radio and television stations. This December I will be teaching other masterclasses online in Europe, Latin America, and Asia.

Hoping to go back to normality soon, I am already planning on playing at the Titanic Museum in Belfast with a program ranging from baroque to contemporary music.