The Recovery Fund and the Green New Deal are both meant to be a stepping stone towards a green future, but Italy is lagging far behind. 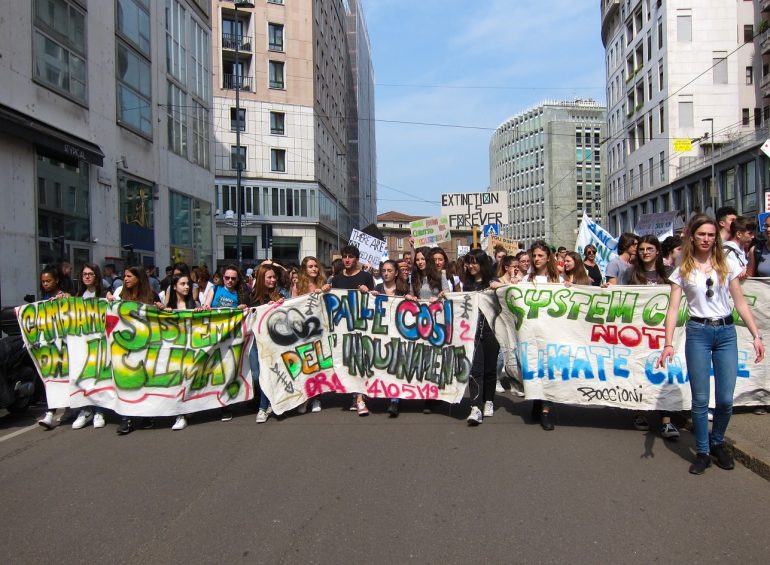 Students marching in the streets and holding banners for climate at a Fridays For Future event in Milan. Mænsard vokser, CC BY-SA 4.0, via Wikimedia Commons.

The Recovery Fund and the Green New Deal are both meant to be a stepping stone towards a green future, but Italy is lagging far behind.

This September, the Italian Minister of the Environment Sergio Costa declared that Italy would receive 208 billion euros from the EU Recovery Fund, the highest amount among all Member States — approximately 28% of the Next Generation EU fund. Of this, 37% is assigned to the ecological sector with a focus on six specific areas, all of which share a common eco-denominator: green revolution and ecological transition, mobility infrastructure, digitalization, education, research and culture, social equity (gender and territorial), and health. The EU spending agreement includes a ‘do no harm’ policy, meaning that any policies that derive from the funds must not do environmental harm, in line with the Just Transition Mechanism. However, the details of these policies are left to national capitals to decide, which does not sound reassuring.

Why isn’t Italy keeping up?

Just this week the European Parliament approved a draft of the EU’s approach to industrial policy, including a section about the environment. This announcement comes after the publication of the VividEconomics Greenness Stimulus Index, which measures a government’s ability to channel the extra funds made available from the pandemic, especially into those sectors that have a large impact on carbon emissions and nature, in favor of more eco-conscious practices. The result for Italy was far from encouraging. “Italy [among others] has benefited from a better historical (pre-covid) environmental performance than some G20 economies, but [is] still channelling funds into polluting activities.” As of now, the government has not demonstrated any decisive actions to mitigate the predicted ecological damages, many of which are ongoing.

According to Fridays for Future, Italy has failed to reserve funds for research and sustainable technologies and did not previously invest in Nature Based Solutions, defined by the International Union for Conservation of Nature (IUCN) as, “actions to protect, sustainably manage, and restore natural or modified ecosystems that address societal challenges effectively and adaptively, simultaneously providing human well-being and biodiversity benefits.” The organization proposes that Italy finance renewable energy, invest in sustainable mobility, shift to sustainable agriculture and a plant-based diet, structure polluting companies for decarbonization, secure the territory from hydrological damages to adapt urban areas to changes due to the climate crisis, and finance public and private research, and circular and green economic models. As of yet, these proposals have been met with silence.

The number of natural disasters caused by climate change has increased in these last 10 years, according to a research from LegaAmbiente (the National Environmental League). To combat this growing emergency, LegaAmbiente compiled a range of suggestions including an increase in green areas, a ban on residential construction in any area at hydrological risk, safeguarding and improving the impermeability of the territory, and creating re-usable underground water/rain containers. Despite these recommendations and the expectations that environmental groups held for their implementation, earlier this year energy companies presented a proposal to the Ministry for the Environment to open more gas stations around the country. These proposals, and the silence of the government about the recommended environmental protections, sparked widespread protests among Italian environmentalist groups.

Increasing popular pressure to shift towards more sustainable practices has led to green-washing, as in the case of national companies Alitalia and ENI  (Italy’s airline and energy providers). Though these companies promote their environmentally conscious stances, yet one can’t help but wonder if it’s all for show. For its part, ENI promotes the use of blue hydrogen: while hydrogen is a source of renewable energy, the blue variety simply collects CO2 that would normally leak into the atmosphere during the process of refining natural gas. The problem doesn’t change, just the promotional campaign.

In November of this year, the European Commission warned Italy about the failure to achieve expected environmental targets. This was far from the first time: in 2014 and 2017, Italy received rebukes for the above-average pollution levels in major cities and was fined for this failure in 2006. The problem of pollution is widespread however and goes far beyond the city limits. Though Italy has made substantial changes to their dumpsite protocols, it still lags behind purification and sewage systems. Indeed according to the EU, Italy has currently the highest number of open cases, with 20 possible violations being investigated.

Since it’s become part of our everyday language we’ve been told that the Recovery Fund is supposed to help resolve these issues. Surely, the amount of attention given to a greener future has increased, but the practices thus far have a long way to go if they hope to meet these expectations.

On December 1, Italian Prime Minister Giuseppe Conte declared the beginning of G20 on his Twitter account underlying the importance of building a safer future for children. Quite ironic, isn’t it?

The Italian G20 Presidency officially begins today. We need to provide the necessary responses to the global challenges ahead of us. We will work together to build, today, the world of tomorrow, in order to hand our children a better Planet #G20Italy pic.twitter.com/GZeohy0StI

Until the government takes substantial steps to limit the environmental damage that large and powerful corporations continue to inflict on the country, citizens have little say in the future of the country. If we want to ‘go green’, we’ve got a long way to go.