Everyone’s Talking About Lockdowns. But What About Looking Down?

‘Lockdown’ is named Word of 2020 due to its wide usage during the pandemic. But what about looking down? That's what Italian artist Jago wants us to think about. 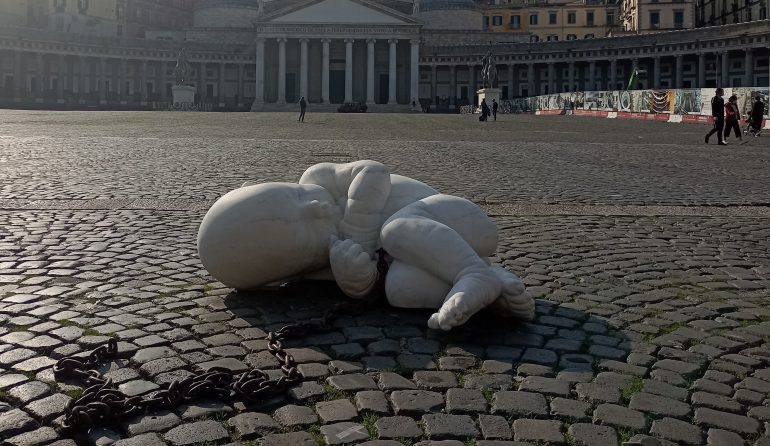 ‘Lockdown’ is named the word of 2020 due to its wide usage during the pandemic. But what about looking down? That’s what Italian artist Jago wants us to think about.

It was the beginning of November when an unusual sculpture appeared in the center of Piazza del Plebiscito, one of the central squares in Naples. The white marble baby — laying down on the bare ground chained and curled up in fetal position — surprised many Neapolitans who didn’t know that it was the work of the Italian artist Jago titled ‘Look down’, and that he devoted it to the most vulnerable victims of the lockdown — the poor.

At the same time, Italians have been heatedly debating the then newly adopted Italian tricolor system of epidemiological restrictions. For this reason, Naples, and the whole Campania region which it governs, came to the brink of a nervous breakdown whilst waiting for the government to decide if it had to go to a full lockdown or not.

I came to Naples to see Jago’s sculpture only three days after the city became a ‘red zone’ — the areas with most severe restrictions. At that time, Naples (and Campania) were still ‘yellow’. Unsurprisingly, Naples was almost as frantic as always, but with less crowds in the streets.

The doors of many restaurants had already been locked. In bars, everyone was talking about lockdowns, curfews and closures. On the building walls across the city, I’ve seen posters that invite citizens to (unsuccessful) October protests against the then announced stricter coronavirus measures.

How long will all of this last? How will I survive? That was the worry drawn on most of the faces I’ve seen that day. The artist who calls himself Jago (whose real name is Jacopo Cardillo) responded to this rather self-centered point of view, with his attempt to make us ‘look down’.

While worrying about ourselves, are we thinking about the poorest among us? Jago entrusted this question to random passers-by in Piazza del Plebiscito, but also to the whole humanity.

Italy and Europe have, in the meantime, faced numerous restrictions that affected lives, jobs and relationships of millions of people. Yet, many of them seem only to see how the restrictions affect themselves.

I have many friends whose lives haven’t changed much since the beginning of this year. They are still able to (find) work, which they do from home. They can still pay their bills. Their dear ones are all well.

Ironically enough, some of them are human rights activists who fail to understand that many of the people who have been protesting against lockdowns in Naples, Rome and Florence back in October are hardworking restaurant and bar owners, artists and cultural workers who cannot work from home. Who cannot pay their bills. Whose families suffer.

Jago’s curled up child, represents those who have been crushed by the weight of incertainty and economic crisis, and who no longer have a voice to rebel. It asks us not only to look down, but also to look around — to see realities outside of our own ones. lockdown