Why Millennials Are Moving Back To Italy

There are positive signs that the so-called Italian ‘brain-drain’ is reversing. Some former expats explain us why they chose to return to Italy. 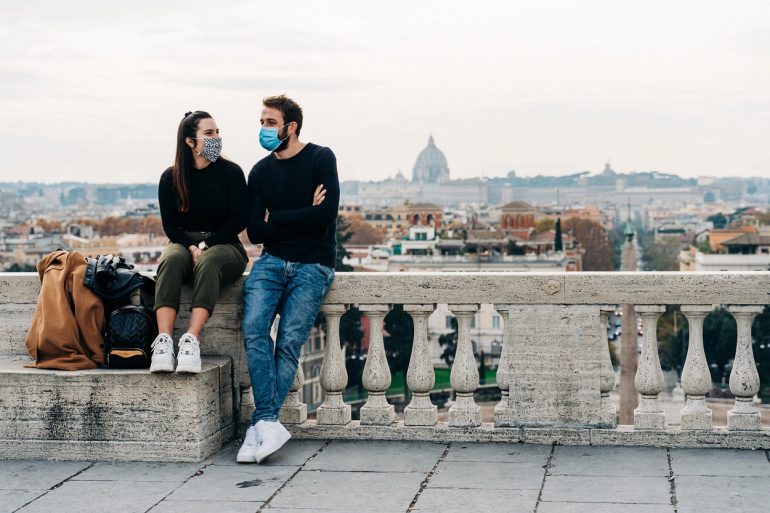 A Millennial couple at the Terrazza del Pincio in Rome. Photo by Gabriella Clare Marino.

There are positive signs that the so-called Italian ‘brain-drain’ is reversing. Some millennials explain us why they chose to return to Italy.

In 2018, nearly 45,000 Italians returned from abroad to resettle in Italy according to figures from Istat, the Italian National Institute of Statistics. This emerging trend of Italians returning home following years of studying and working abroad could be the silver lining for Italy that shines through the decade-long cloud that saw a mind-boggling 816,000 young Italians leaving their homes. This flight of Italian youth to seek better education and work opportunities abroad led to a hemorrhaging of young, highly-educated talent but there are positive signs that the so-called fuga dei cervelli (brain drain) is reversing.

This has run in parallel to a reshoring trend for Italian manufacturing companies between 2014-2018, with this reverse tendency triggered by an emerging realization that relocating to Italian soil results in a more sustainable way of doing business overall while protecting the quality of the end product. The ‘Made in Italy’ label, strongly associated with top quality design and luxury products, had begun to suffer with lower quality standards and rising production costs becoming the norm at its offshore locations. Coupled with this, a blossoming of home-grown talent returning home actively influencing Italian innovation and change, is driven by a desire for more conscious living aligned to deep values and a desire for contribution. So let’s not blow this big chance for change.

A new ecosystem for innovation

Sharon Cittone, Milan-based innovation advisor and mentor to startups in Italy pointed out in her interview for Italics Magazine back in May that, if Italy wants to be global leader in innovation, it really needs to start attracting the big talent from overseas — as the UK and Germany did to attract Italians — but it also needs to take serious steps to create a sustainable ecosystem that is appealing enough to persuade Italian expats to return to Italian shores and build their businesses here; something that millennials are evidently already doing. Furthermore, a study by the Enel foundation in July 2020 found that sustainable economic business practices, conscious consumerism, environmental protection and digitalization are what millennials (and the up and coming Generation Z) see as linchpins for sustainable innovation and growth in Italy.

Italians returning home have a wealth of experience to share

Martina Giulianelli, 34-year-old Co-Founder of Food for Good and President of delivery platform CiaoSergio that provides a sustainable food delivery service, came back to Milan after spending over 13 years in London with a desire to live in a more sustainable world and communicate with purpose. “I’d always planned to come back because I wanted to use the personal and professional experiences I had gained abroad and share them in Italy.” She adds, “It wasn’t easy to adjust to the Italian bureaucratic system but Milan had changed a lot while I’d been away. It was now the city that deserved to be, for people to meet, to share with others… and I could fit into it.”

A change of pace draws Italians back

Italian millennials abroad have been inspired to make the jump back by the relatively slower pace of life Italy can offer. Sebastiano Mottura, 24, explains, “When I first went to London to study Business Management and work in the hospitality sector, I didn’t know for sure I was going to come back, but eventually I was exhausted by all the stimuli of the city and saw a lot of friends being overwhelmed by city living. I realized that the slower pace of life at our family agriturismo was going to provide me with a much needed change.” He goes on to say that he “had to experience the beauty of living in a city and mixing with all those cultures to reevaluate living in the countryside. The green spaces, clean air, walking undisturbed in nature.” Now, as one of the new owners of Sergio Mottura, Sebastiano says that “focusing on the organic and not polluting that much, gives me the chance to sleep better at night. My respect for nature is an honest will to bring this philosophy to others through their experience at our hotel.”

This sentiment for nature and sustainable living is felt keenly by other returnees too. Thirty-seven-year-old Marco Melega’s experience as an organic farming volunteer, termed ‘WWoofer’ in Australia and then New Zealand, cemented his own deep beliefs for a more frugal, consumer conscious way of living that he dreams of translating into the opening of an organic farm near Bologna.

But it’s not all plain sailing. Lisa, 33, originally from Tuscany, lived and worked in Scotland for five years. She had found it easy to get a job in Edinburgh as an English teacher, finding a suitable position within just two months. However, becoming an English teacher in a state school in Italy would be problematic because the standard pre-requisite for language teachers is a languages degree — hers is in Media Studies. She has found work in Piedmont in a private school, but the permanent contract that was initially promised turned into an annual one due to the economic downturn in Italy following Covid. Prior to this, she had been furloughed in Scotland so work was drying up there with private schools being less inclined to turn to digital learning solutions. “We would have moved back anyway,” she says, “but maybe waited a bit longer. Brexit and Covid were the main reasons we came back now.

Remote working is no longer taboo

Riccardo, 32, also made the decision to return after some years abroad spent between the UK, Belgium, Portugal and Ireland. Now back in Italy, he has been able to capitalize on having studied and worked in London and Brussels by setting up a digital services studio allowing him to work remotely and travel often. He has also observed a recent trend among his European colleagues seeking out lower impact lifestyles, with people starting to move away from the cities — this also being one of the other collateral consequences of both Brexit and Covid.

It’s not just millennials who are making the move back

But the benefits of repatriating to Italy are not only for millennials. Benedetta Lomoni, 45, reaped the benefits of working abroad on her return to Italy after eight years in London. “London is like a huge washing machine that spits you out cleaner.” So, on settling back in Viterbo, she has been able to set up as a freelance trainer for private companies and professionals.

Italy isn’t half as bad as some Italians make out

English Teacher Roberto Giambra, 42, moved back to Italy three years ago after having lived in the US for 25 years. “I lived in Upstate New York, San Diego and North Carolina in those years and my first trip back to Italy was after having been in the US for thirteen years. I didn’t like Italy that much then because people were always complaining and I was young and believed everything I heard. I saw a lot of complaining about being poor, unemployment, not being able find jobs, the government being corrupt… But it was after that I started doing some of my own research online into what Italy was really like. I started checking out the economic statistics, stock market and the biggest companies, import-export, and saw that, contrary to what people often think, it is in fact, high up there. So after a few more years in the US I decided to come and check it out myself.

“What I have found is that the same problems exist in the US too. The difference is simply the mentality and approach to things. I believe there are a lot more opportunities than people think in Italy simply by not looking for the typical permanent contract (posto fisso). Since I’ve been back, through my English teaching work, I’ve actually helped people find jobs by blending my American approach with the Italian.” But there was also something else missing. Roberto says, “As I got older, I realized I wanted something more. I wanted the real quality of life, the socializing, the food, health and I wasn’t finding it in the USA.”

Those desires for a better standard of living are also paralleled somewhat in Alessandra’s story. Freelance medical translator Alessandra, 27, was born in the US. The daughter of an Italian father, the family came back to Italy often and she spent her third year of high school here. “I felt much more at ease in Italy compared to the US and met my values here. America is a stressful place with exorbitant prices now in the Bay Area following the 2012 tech boom. The changing landscape there was almost unbearable to watch and I had so many friends who were struggling to make ends meet, but I had the privilege of opting out.”

Sustainable programs and well-thought out strategies are needed

The reasons why millennials and their slightly older compatriots have chosen to return to Italy frankly boil down to wanting a better quality of life, and Italy, it seems, still offers that. The difference appears to be that those who spent their time in European cities, especially London, always had the intention of returning to Italy at the back of their minds. They just didn’t know when. Brexit and Covid are more accelerators to that change rather than direct reasons for it. Political and economic waves of change are also a reason for Italians coming back from the US. But what is sure, is that those returners with their fresh perspectives, business acumen and language skills, have a unique opportunity to be a catalyst for sustainable innovation in Italy working in collaboration for change. Making a difference for the future benefit of the country is also at the heart of policy strategies and programs in order to not blow this big chance.