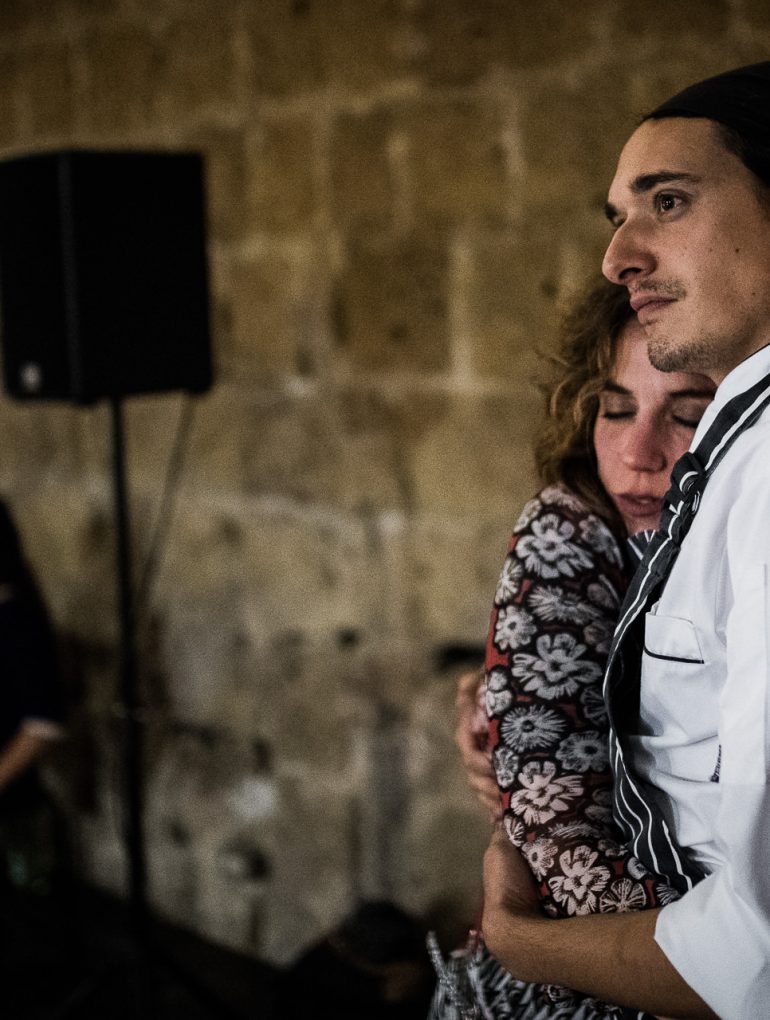 Thanksgiving Will Be There Next Year

I never really cared much about Thanksgiving. Perhaps it was because as a child, my family had marathon dinners every Sunday anyway and I preferred my grandmother’s meatballs or my mother’s eggplant to turkey. Maybe because the day itself was taken over by a series of football games that everyone dashed to see in between helpings of stuffing. Later on, it was probably because I was usually working on the day, serving other people their Thanksgiving lunches or dinners during double shifts that meant I’d be eating whatever was leftover on the half hour break between service. It may also have been because of those few times we dared to drive into Manhattan for the Macy’s Day Parade, most of which ended with us suffering mild hypothermia and one of which ended with my Aunt Chris locking her keys inside of her car.

Maybe the answer is much simpler, in the end. I left America a long time ago and when I left, I took very little of it with me. Heading to parts unknown often means leaving behind the things that are most precious, the things you might miss the most when you go, and doing so with a clear enough eye that when you pack those things away you do not even realize that they’re gone. Leaving, going alone, is a cold action. If you don’t want to crack, you need to seal the walls well between yourself and the things you cannot take. Sentiment is a heavy load to carry, and I have made a point to travel light.

In balance, I gained more than I lost by packing away my own traditions in order to know others. I have made dahl for Diwali in Malaysia, drank copious quantities for Boxing Day in England, and roasted lamb in the Algerian desert for Eid. I did those things and loved doing those things because I was far from my own home, so far that I forgot what home even meant. It was worth it.

Coming to live in Italy was not supposed to be a return to an imagined community of which I was magically part by virtue of some untapped blood that ran through my veins. It was meant to be a stop among many, another brick in a long, winding road. It was certainly never meant to be the place where I rediscovered the one tradition that is so deeply tied to North America.

But that’s why tradition is a funny thing, don’t you think? Particularly when we leave it behind and rediscover it, sometime later on, in the most unlikely places. It means nothing until it means something, and it only means something once our own hands have touched it. It creeps up on you, first as a novelty, then as something to hold, to protect, to cherish. That’s what Thanksgiving became, tucked in a corner of Italy that people are only now starting to discover although people have been here all along. Quite fitting, isn’t it?

Because you see, it did start as a novelty. An offhand remark from our American friend Nikki about getting together to cook, perhaps spurred on by the fact that my husband Mark is a chef and while not American himself, had prepared way too many Thanksgiving dinners during his tenure in the United States to even pretend that he wasn’t entirely equipped. Another friend had a restaurant that he was planning to close during that week, and others still had an insatiable curiosity to find out what a ‘real’ Thanksgiving dinner was like. Soon the idea spread and what would have been a group of ten friends grew, and grew, and grew. We made crude tickets and asked people to contribute enough to cover the cost of food and the space, not even taking our own labor into account.

By the time we sat down that first year, there were sixty five of us.

Getting the turkey was the easy (ish) part, although neither Mark nor I had ever seen birds of quite this size. Most of the vegetables came from Nikki’s garden, including sunchokes that took forever to peel. The more specific ingredients took a bit more effort: an appeal on a Facebook group led to a day long journey to a small farm near Perugia for the only woman we knew that sold sweet potatoes. The complete absence of indigenous cranberries in Italy forced us to improvise with pomegranate and quince relish. Everything was local, except for us.

On the day, people came early to transform the most typically Italian osteria into one long, snaking communal table, picking fallen leaves off the ground in the park opposite for decoration and lighting candles that I think we had all been saving for a power outage. When the time came to serve, we watched as this motley crew of who knows how many nationalities passed plates back and forth to each other, strangers sitting tightly packed against the wall slowly letting their own walls be breached as they asked for more gravy, a biscuit, or the mashed potatoes. There was laughter, so much laughter, phone numbers exchanged and glasses raised not in unison but in the spontaneous gesture of joy. It worked, it really worked. And when it was over, everyone asked the same thing:

“So, where are we doing it next year?”

And that’s how traditions start, I guess.

By the following year, the moveable feast found its way to the Abbazia di San Giusto, a 12th century Cistercian Abbey in Tuscania where we worked as private chefs to their many guests. The cavernous refectory, with its long tables that had once hosted silent monks, would get filled over capacity by the people who had started to mark the date months in advance or had somehow heard that this tiny town was the one place to have a real Thanksgiving. The tickets got less crude, the photos got better, and there was even music: journalists called and film crews from Rai Uno arrived to watch us truss a giant turkey and explore the mysteries of cranberry sauce in our laughable Italian.

Then our friends started to arrive from the homes they’d made outside of America, perhaps also having been surprised by the sneaky stride of tradition. We’d be headed to the airport to pick friends up from Brussels or Milan, and others would arrive at our house after red eye flights from Jordan, road trips from Florence and France, layovers from Hong Kong. Our house would be filled with people on the nights before Thanksgiving, the same way I imagine yours must have been filled with kids coming home from college or relatives flying in for the weekend. All of them generously offered to cut carrots, make centrepieces, or in the case of some, make it possible for Mark to cook for what had become more than 200 people over two full days. And we’d all be exhausted, exhausted, in the days leading up and following. There was never enough that Mark and I could do to thank them, not enough money in the world or in our bank accounts to compensate for their time and energy. But I think (at least I hope), that they were glad to have been a part of it. Because something about it was magical, far beyond anything that we could ever have orchestrated or anticipated.

Mark and I met at work, he a chef and I a server at one of the many Michelin starred restaurants that drive up rents all over Manhattan. We’ve always worked together and as private chefs have evolved to a point where, during a service in particular, most of our communication is in silent gestures and hand movements and, despite the fact that we’ve been married for seven years, a handshake when we finish. These are the quirks of working in food, a strange and ritualistic reserve of formality to which we all return, regardless of our relationships outside of the kitchen. I defer to him because he is the chef, and we glide around each other wordlessly to make sure each plate is a perfect facsimile of the one before it. That’s the job.

But on Thanksgiving, our Thanksgiving, it all works a bit differently. We furiously crank out platter after platter of food, all of it going to the tables in one massive wave that although carefully calibrated, looks more like a mess hall than a Michelin service. When we’re done, we don’t shake hands or politely nod to each other. Instead, we walk around the room together and talk to everyone, every single person in the room to thank them for being a part of the moment. And when Mark sits down in a chair that has been momentarily vacated by someone going for another helping of pumpkin pie or to dance, I put my hand on his shoulder and I think I lean on him the same way my grandmother used to do when she would watch us all eat after her work was done. She rarely sat down at those meals, and by the time she was out of the kitchen the din from a group of Italian Americans eating was so loud that almost no one noticed her. But she didn’t need it. And now, I know why.

Communion is the first thing to go when the world turns in on itself, and the very essence of what makes Thanksgiving so unique is exactly that opportunity to strengthen the intimate bonds that make the fortified whole. So we lose it when we cannot sit closely and nudge strangers into becoming friends; we lose it when the notion of a shared feast is more of a threat to our survival than a celebration of it. This year there will be no Thanksgiving for us, no friends to pick up at the airport, no giant turkey to tame and no sweet potatoes to procure. There can’t be, because everything that makes it more than a meal is everything that this year has taken from us. Whenever you are and whoever you normally welcome into your home knows this and feels that particular sting in its absence.

I know how tempting it is to throw caution to the wind and try to make it happen anyway, despite the overwhelming evidence that tells us to skip Thanksgiving this year. I know how hard it is to swallow that pill, the one telling you to forego the traditions that mean so much to you and the warmth that all of those precious bodies together brings. But the thing about traditions, which I have only just learned, is that they’re a lot more durable than we think. They build a camp for themselves inside of us and even when we think that we’ve lost them, they emerge from their little shelter to remind us that they’ve been there all along. So this year I’ll pack Thanksgiving away and keep it for another time when it can be unbridled and pure. I will remember it as a time of day, a flicker of light, a chorus of noise and laughter. I will remember it as the spark that illuminates us both, your hand in mine. And then we’ll go on, different and perhaps slightly bruised by the time this is all over. But we will go on. We’ll feast together again and when we do, these days when we lost the light will fade away and it will mean even more to be grateful for its return. I’ll meet you there, and I’ll save you a spot at the table.