Maradona was not simply one of football’s greatest, like Pelé or Messi. Though his left foot was pure poetry, it was with his hand that he changed the world. 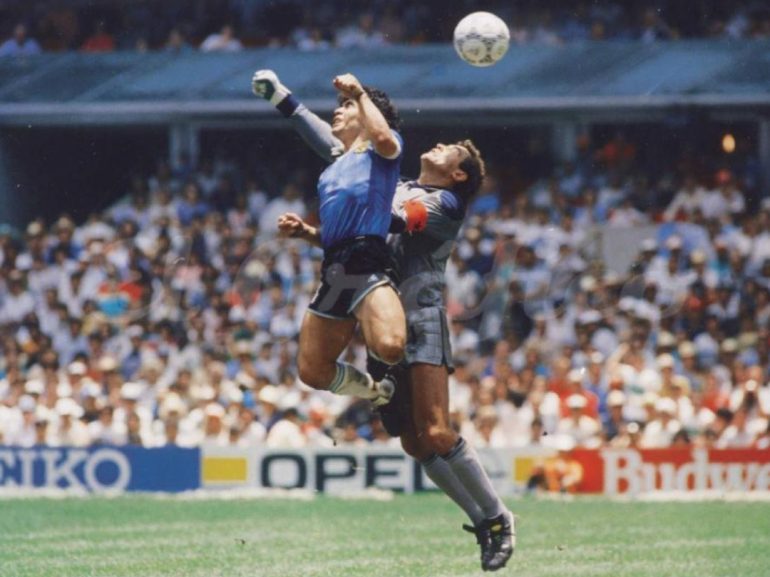 The Hand of God, (not) oil on canvas.

Maradona was not simply one of football’s greatest, like Pelé or Messi. Though his left foot was pure poetry, it was his hand that he changed the world.

Diego Maradona’s death is further confirmation that 2020 is exhaustingly nonsensical, a year where even deities are allowed to die. Indeed he was not simply one of football’s greatest, like Pelé or Messi. Though his left foot was pure poetry, it was his hand that he changed the world. With it, he made what is perhaps the most iconic gesture in the history of football.

There is something deeply wrong in idolizing a character who defeated his opponents by cheating, as Maradona did under the Mexican sky in that famous 1986 World Cup match against a much-hated England squad. But some moments, and some people, transcend events and convention. Some people have that quality that makes you love them even though they throw all that you value into question. More than thirty years later, the ‘Mano de Dios’ stands out as one of the moments that made football the most popular sport in the world. From Reykjavik to Canberra to the pages of this article, we call it football and we all know what that means because of Maradona.

Perhaps the best part is that Maradona knew he was going to do it before he even did it. The English probably realized it immediately, along with the rest of the world. But it was transcendent, a great equalizer in a time when it was sorely needed. The wounds of the Falklands War were still raw for Argentinians and without Maradona, it’s entirely likely that destiny would have followed the hierarchy everyone expected. Two possible World Cups for England, one for Argentina.

I’ve learned this the hard way that football is really a mirror and a metaphor of all questions of life. Over my 32 long years of sporting disappointments, the same European teams have dominated. Atletico Madrid will never best Real Madrid, as a header by Sergio Ramos reminded everyone in the Spanish capital. In Italy, either you have stripes on your shirt, or you know that you’ll win every 20 years — hopefully.

Of course, there are always surprises in sports, but it only happens when figures like Maradona exist. He was the ultimate embodiment of this philosophy which transcends football and applies to life itself. He was the one who made the impossible come true. What are the odds that the same player scores the two most iconic goals of the century in the same match? I’ll always keep the video of it somewhere close to remind me that the impossible is only temporary.

And so his death brings back his life, in living color: his choice to play for Napoli and take on the rest of Italy and Europe on his own, winning two Serie A titles and a UEFA Cup for the first time. His surreal and controversial meetings with Fidel Castro and Chavez, which encapsulated his ‘love me or hate me’ worldview. His deeply flawed treatment of women, and his insatiable habit for drugs and alcohol. His ability to be the greatest Neapolitan ever — I’m sure Totò and Troisi won’t get upset — despite being born in another hemisphere.

Only Diego Maradona could pull it off, a sleight of hand performed in plain sight, and all the more entertaining because of it. He made us dream along with him, and despite all evidence to the contrary, he made us believe. This is why Maradona matters, now more than ever.