Art and culture will only thrive once we treat it as a tool for economic recovery. 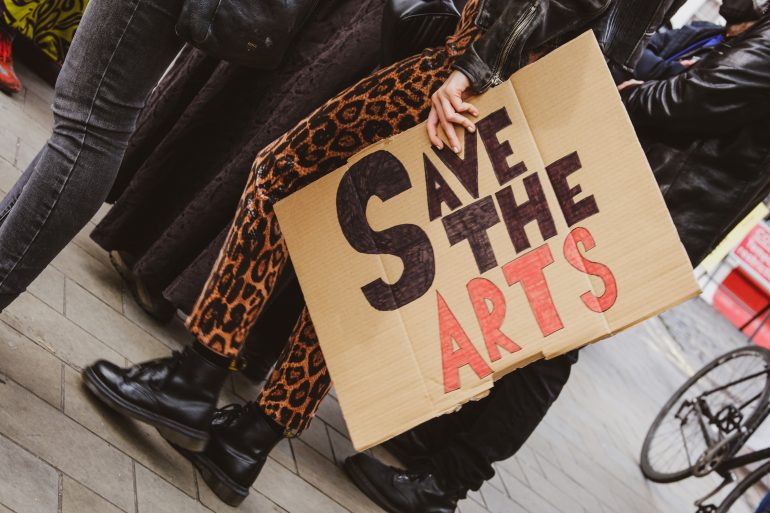 How Covid-19 is affecting the art economy in Italy? Protests and pleas from the culture industry are highlighting the cultural shock.

In his novel, The Idiot, Dostoevsky declared that “beauty will save the world”. Can the same be said for culture in Italy?

While the Summer of 2020 lulled many of us into a false sense of security, the second wave of the Covid-19 pandemic in Italy made the whole country feel as if it had hardly had a chance to catch its breath before once again being plunged into crisis. While worries about a new lockdown were initially confined to the most superstitious, by the end of October new measures had been passed by the government: the solidarity of the Spring was replaced by general discontent. Nowhere is this more evident than in the arts and cultural sectors of Italy. Even though bars, art galleries, cinemas and theaters had taken seriously the protective measures required to reduce the spread of infection, it was not enough to avoid wholesale closures.

Of course, the richness of our cultural and artistic heritage lies in stark contrast with the data about cultural expenditure in Italy. Since 2015, fewer people are enjoying live entertainment and performances, preferring on-demand experiences from their living room. State and regional bodies have progressively reduced resources geared towards the promotion and support of the creative industry, which only reinforced a rising popular attitude.  The Covid emergency only served to shine a light on the weaknesses of the cultural machine, the entire network of human and economic connections that constitute it.

The government’s strategy has heavily affected the Italian economy, for while it is often overlooked, the cultural, artistic and creative industries are a powerful driver in the creation of economic wealth. A 2019 Symbola report found that the creative sector generated a real value of almost €96 billion for the year, and even the title of the study, Io Sono Cultura — I Am Culture — emphasized the importance of it to Italy. Moreover, arts and culture account for 6.1% of total employment in Italy. The actors, storytellers, movie producers, graphics and illustrators may not be ‘essential workers’ as we have come to define them, but they will be a fundamental part of a full national recovery once the emergency ends. As Unioncamere President Giuseppe Tripoli highlighted in the Symbola research report, Italy outranks France, Germany, Spain and the United Kingdom in the total number of businesses operating in artistic and cultural fields.

Of course, a significant part of this total is due to the rich cultural and artistic heritage throughout the country, which both ensures its legacy and inspires new projects. However, neither the symbolic nor economic importance of the cultural and artistic sectors in Italy have provided protection to its workers during the emergency, and the need to preserve these institutions has been consistently underappreciated or relegated to the backseat when national recovery is discussed.  As a result, the arts and culture for which Italy is so world-renowned are being trampled on in the race to get the country ‘up and running’.

The disregard for arts and culture at the national level is particularly ironic for two reasons. First, cultural institutions were among the most innovative in their approach to safety measures, imposing precautions such as staggered entry time to museums and socially distant seating in both the theatre and cinema, as well as experimental methods of engagement. Video tours of museums and art galleries, online workshops to learn ancient history and curiosities about the past, podcasts and digital readings of books were only some of the ways that artists adapted to keep both culture and their businesses alive. As a result, data shows that the creative sector has maintained a low level of community spread and could effectively guarantee the highest level of protection for both spectators and visitors.

Second, art, culture, and creativity became essential tools during the months of lockdown, helping the entire world maintain their psychological stability and well being. Our desire to turn into painters, video-makers, singers and storytellers for a couple of hours each day represented an escape from the fatigue and fear. Watching tv shows and movies, maybe with our friends over a video call, cleared our minds and made us feel connected.

Yet despite their efforts and the importance of what they do, cultural institutions and their workers suffered, even before the second lockdown. Indeed, even when new restrictions were just a rumor, a flash mob took place in front of the Duomo in Milan. Their motto, “un unico settore, un unico futuro” — one sector, one future — and the empty trunks brought by representatives of the creative industry expressed an attempt to turn the spotlight onto the economic crisis they face.

Another plea came after the signature of the new government decree at the end of October, with council delegates from several Italian cities appealing to the government to rethink the limitations to avoid a total collapse of the creative industry. Their letter highlighted the damage that the government’s approach was doing to arts and culture in Italy.

Perhaps we have all underestimated the power of these activities, and for the first time, we’re experiencing cultural shock, though not from traveling abroad but from finally paying attention to our country. We can’t forget the enormous power of a cultural experience as visiting a museum, going to the theater or attending a stand-up comedy show. Even before the global pandemic, experiencing something either alone or with someone helped us catch our breath, reduce our anxiety, and appreciate what we had.

The significance of cultural institutions to the Italian GDP and wealth generation underscores the necessity to take concrete actions to support entrepreneurs, artists, concert technicians and anyone else who makes a living from arts and culture. Small measures, like widely available and affordable high-speed internet, could have an enormous impact on the preservation of art and culture as well as its diffusion to everyone in Italy. Virtual Reality and HD video streaming would allow us all to visit museums, archaeological sites or art galleries without leaving our homes but could also help to support emerging artists, join online communities or sign petitions to support the creative industry. Each of these is a real action that would give the industry the appreciation it deserves.

Acknowledging the centrality of the creative industry to our shared social and economic welfare requires a common effort from both the state and the population. In Italy beauty, art, and creativity are a given due to the enormous richness we’ve inherited over centuries, which continues to inspire people every day. But it cannot be taken for granted. Instead, it should be treasured as our best weapon to boost cultural growth and the recovery of the economy.