A Future For The Past: The Venice Paradox

Venetians made their choice in the September 2020 elections and went for the quick-money option — but due to climate change and the legacy of the virus that may not be straightforward. 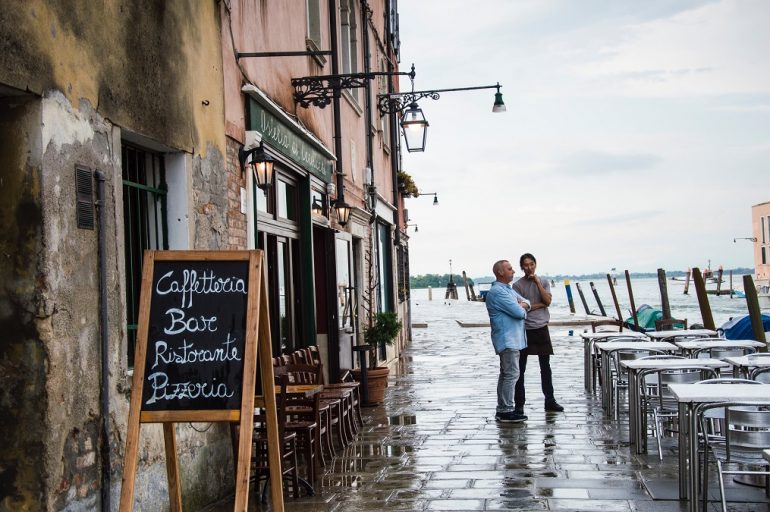 Two men standing outside a cafè in Venice. Photo by Miglė Vasiliauskaitė.

Venice made its choice in the September 2020 elections and went for the quick-money option — but due to climate change and the legacy of the virus that may not be straightforward.

The Covid-19 emergency caused the economic foundations of Venice — its tourists — to drop away so rapidly that thoughts quickly turned to what happens next. Would the shake-up open doors to a new sustainable future or would Venice just bounce back to the way things were, a route to degradation, but with the money taps turned back on?

On the face of it Venice has gone for the quick-money option — but due to climate change and the legacy of the virus that may not be straightforward.

Venetians made their choice in the September 2020 elections. The centre-left opposition promised a more sustainable tourism, but the incumbent, right-wing businessman-entrepreneur Mayor Luigi Brugnaro, promised a return to boom and his constituency went for it.

“Brugnaro wants relaunch tourism as it was before Covid,” said Venetian activist Mario Santi. “He wants to turn the clock back. Acqua alta and Covid have changed things. I don’t think he can, but many believe him.”

In the 1990s historical Venice still had some economic resilience, with local shops focused on the community and a good number of businesses independent of tourism. But it has gradually changed to an economy based on tourism monoculture in part due to the regional government’s reforms of property law in that era giving the free market unfettered control.

That mostly continues, but since Covid, reconversion to a more balanced economy has made a tentative beginning. With the absence of tourists for all these months, some apartments have been returned to residential housing, for example.

In a related development, cruise ships have shown a new reluctance to visit.

In August 2020, the MSC line announced its ships would not visit Venice at least through 2021, stopping instead at nearby Trieste. No reasons were given, but this appeared to be in part a response to global opposition generated by environmental concerns and images of cruise ships looming over the city. The bottom line is that Venice is losing cruise tourism.

At the same time attitudes have begun to change. Those profiting from tourism had been content to ride out the wave — and just make money. Brugnaro has not incidentally seen local properties grow in value as the money flowed in. But a few weeks into the virus emergency, he surprisingly questioned Venice’s development path. “It’s clear that the model needs rethinking,” he said, suggesting high-speed internet cables newly installed in the city could be a basis for a revised plan to attract new kinds of business.

What the election showed was that the fundamental division among the Venetian voters has sharpened. Brugnaro also won mainly by appealing to the parts of municipal Venice outside the historical centre and islands: Mestre and other towns on the edge of the lagoon. Tourism there is seen more purely as an economic fountain without much concern for environmental and social changes called for by the historic areas. With 230,000 residents, the terraferma outnumbers the 52,000 inhabitants of the historic centre and islands. The latter voted against Brugnaro.

The reality is, however, that Venice needs to diversity and that tourism will take a year or more to resume. Venice also has to face up to the longer-term future dictated by climate change. It faces new challenges due to the pace of sea-level rise that throw a wrench in Venice’s already troubled construction of dams against flooding due to acqua alta.

The vested interests in property, cruise ship business, the industrial ports and hospitality pose huge barriers, but without action to address the downsides of mass tourism and the looming environmental threats, Venice as we know it will continue to decline.

A grass roots movement and the political opposition has long and vociferously demanded change: greater management of the property market to favor the residential community, support of the artisanal trades, a clamp down on the excessive motorized boat traffic and on cruise ship movements that are eroding the lagoon. A re-think of the plans to stop acqua alta have proposed looking ahead at what happens when sea-level rise undermines the utility of the massive Mose dams now under construction.

The Venetians have worked hard to save and promote their community. They are also working for a different future through campaigns to save historic buildings and islands for community use, rather than converting even more to restaurants. Many others have encouraged immigration to Venice to replace the long decline in population. Even architects are thinking about how humans can live more in tune with nature in the tidal lagoon.

If the government takes the hint and supports these trends, then, just maybe, Covid-19 will become a turning point after all.