A Comparison Of Political Mobilization In Italy And The US

How the US elections confronted Italy with its lack of grassroots engagement as well as political mobilization. 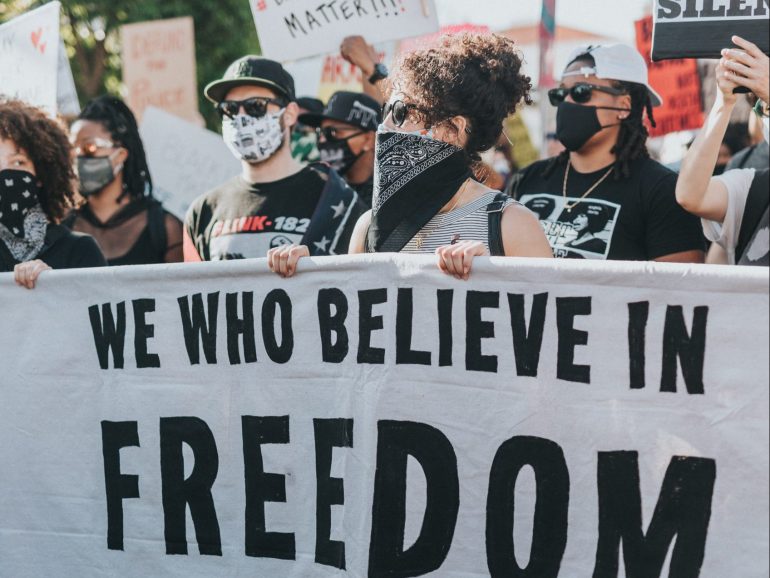 A protest in the streets of the United States. Photo by Nathan Dumlao.

At the (not really) end of the 2020 US elections one great phenomena remains unquestionable: the extraordinary political mobilization provided by both the red, the Republicans, and the blue side, the Democrats. The unprecedented engagement of the African American community and its famous Black Lives Matter movement as well as the Latinos for Trump in Florida, especially in Miami, are two of the clearest examples of this phenomenon.

While the Latinos were credited with producing Trump’s victory in Florida, the role of Black Lives Matter was crucial in orienting Americans’ vote. Indeed, it has been estimated that 9 out of 10 votes have been influenced by the anti-racist riots in recent months: 56% of them chose Biden and 44% Trump. The movement Fair Fight Action of Stacey Abrams instead has played a central role in bringing people to vote in Georgia, a historically red state where the Democratic Party won.

This great mobilization has also resulted in a huge electoral participation with the highest turnout rate in over a century (66.5%) and more than 160 million Americans voting. Joe Biden (with Kamala Harris) became the most voted president of the United States with 70 million votes.

Naturally, the American elections have been followed with great interest in Italy. During the famous Friday night TV show ‘Propaganda Live’ different journalists have shown their admiration for the political passion and participation demonstrated by the Americans.

In particular, they hope that such a phenomenon could also eventually affect Italy. Marco Damilano, Director of L’Espresso, even admitted to feeling a hint of envy for the participation and mobilization that has been observed overseas.

With respect to this, I have asked myself if it is true that, in Italy, such grassroots engagement, political mobilization and passion is missing — and to what extent.

What does the data tell us about political mobilization in Italy?

Despite the turnout in the 2018 national elections was around 72%, therefore higher than in the United States, this represents a negative trend (-2.3% compared to 2013) indicating that, in its broadest sense, political participation is in crisis.

The last report by the Italian National Institute of Statistics (ISTAT) about Italy’s political participation between 2014 and 2019 delineates a general negative trend as “the share of people aged 14 and over not engaged in politics has increased from 18.9% to 23.2%.” In fact, there are 12 million people in Italy, which represents a quarter of the adult population, who are completely disinterested in politics.

The report highlights the difference between the wider concept of political participation and mere electoral statistics, which do not analyze other direct and indirect forms of engagement. These include how much Italians talk about politics and how much they inform themselves and listen to the political debates (indirect), or “participation in an electoral rally, in a protest march, or a direct involvement in a political party by volunteering or contributing money” (direct).

Most importantly, with respect to the active participation observed in America, in Italy people tend to get involved only indirectly through the newspaper, magazine and TV shows or by speaking about it. Unfortunately, direct engagement is more rare.

Interestingly, the reasons behind political dis-engagement are linked to different factors such as the lack of interest (64.9%), and lack of trust in the political system (25.5%). Furthermore many people considered politics a complicated issue (about 10%) or they did not have much time for it (7%).

As far as the age groups are concerned, there is a particular dynamic that concerns young people, especially between 14 and 24 years old, which is the most important age group on which to intervene to hope for a positive impact in the future.

The Italian National Institute of Statistics shows that young people who do not participate in political life are on the increase. Taking a more detailed look at the dynamics affecting this age group and also analyzing a study by the European Commission, it appears that young people between 14 and 24 are the most involved in active political experiences (14%) but register a significant decrease in membership and participation with political parties. In short, they go to the streets, but without party flags.

Finally, it is important to highlight how political mobilization is strongly related to the level of education as 38.8% of people in Italy who only completed primary school are not politically engaged. Among people with a high school diploma, this percentage drops to 8%.

In light of the data there are some considerations to be made. As demonstrated by the mobilizations that have taken place in recent months, as in the case of the Sardine, the invisibles of Aboubakahr as well as the Friday’s For Future or anti-racist movements, the involvement of political institutions is almost non-existent.

In Italy, active participation is in fact not supported by political parties. Politicians are rather deaf to the political issues dear to the citizens as in case of the demonstrations against climate change which have interested the younger generation. No Italian party has been able to endorse this demonstration and to offer a political platform ready to listen and help them. It is no coincidence, therefore, that very young people, despite showing the willingness to commit themselves to change their society, find no interest in doing so together with politicians.

In another analysis, the cultural and educational condition of the country weighs heavily on activism and political participation. And this is still a cause for concern when we look at the growing numbers of school dropouts and the pandemic situation that has further weakened the school system and access to it.

As with many other problematic aspects of the country, an investment in education — which is not only school, but is related to all the activities in the field of culture — would be an optimal starting point to increase political mobilization.