Dejan Cetnikovic is the Italian karaoke reporter who makes more than a hundred politicians and members of Parliament sing. 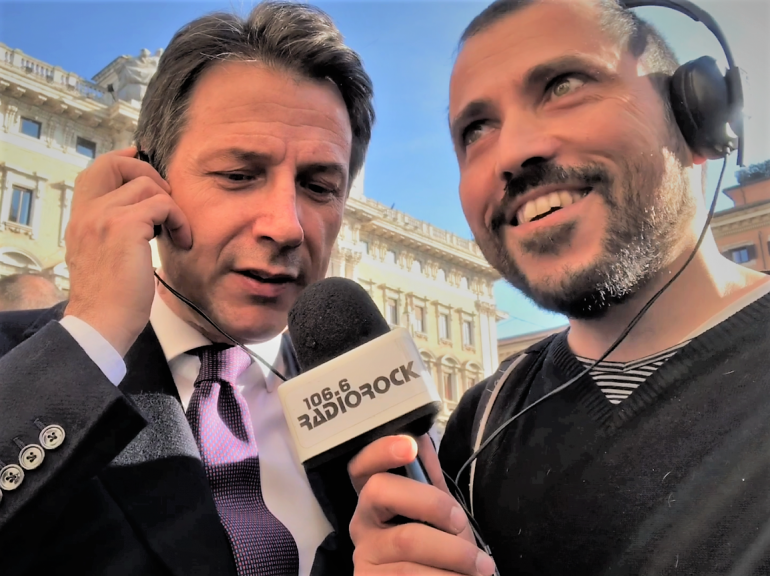 Dejan Cetnikovic is the Italian karaoke reporter who makes more than a hundred politicians and members of Parliament sing.

Dejan Cetnikovic is an Italian journalist born and bred in Rome, even if his family ancestry is linked to Serbia. He is well-known in Italy as he has been able to make more than a hundred politicians and members of Parliament in his interviews to sing. Just to name a few, Dejan has convinced Vittorio Sgarbi, Luigi di Maio, Cècile Kyenge, Matteo Renzi, and even the actual Italian Prime Minister Giuseppe Conte to perform live in his interviews.

It is well known that the language of politics is not always easily understandable except through the art hidden inside a song. Through song, you can gather universal and inherent messages that are easier to understand, inescapable, and that can be directly decoded.

Dejan, how did you get the idea of making Italian politicians sing?

Working as a freelancer for Radio Rock, a well-known Italian broadcast channel, I started working closely with the director Emilio Pappagallo and his morning show as a special correspondent. Personally, I have always loved karaoke, rock music and interviews so I simply put all these three interests together in order to create something new, a new concept to entertain our public.

Tell us how a ‘karaoke interview’ is built: what kind of organization is there behind it and how are the songs chosen?

Well, a karaoke interview is not always organized in the same way: sometimes I get in touch with the representative staff of a politician, other times instead, I simply go to political rallies and use my spirit of improvisation. For what concerns the choice of the song, you would agree with me that it is extremely important to pay attention to the lyrics. The text, in fact, often hides a message between the lines that could be linked to a current political situation or to social events happening in a country. Moreover, the songs must also fit a politician’s attitude and voice. So, the final choice is made respecting those aspects.

It is not only a cliché, but music is an international language. People decide to get in the game with irony, employing music to spread messages, being aware, at the same time, to be the addressee of possible critics and/or discussions and sharing on social media. In your opinion, what pushes a politician to ‘take on the challenge’ and sing in front of all Italy?

Exactly as you pointed out, music is indeed an international, direct and intuitive language. It is an extremely popular instrument among the young generations that often do not understand political jargon and therefore feel distant from the current government affairs. As a matter of fact, music is a powerful tool that could bring politicians close to young people in particular, entering their lives through a universal language. I am sure that this is one of the reasons why politicians accept taking on the challenge that I propose them.

How would you describe Italian politicians once they remove their institutional shoes?

They are human beings, just like us and the people we know. Obviously, as persons they have different personalities and attitudes: some are more exuberant while others are shier and more discreet.

Who has been the most difficult politician to convince to take part in a singing interview? And who is the most in tune?

Making a prime minister sing has certainly not been an easy task; imagine making two of them sing! Both Giuseppe Conte and Matteo Renzi, who took part in a singing interview while in office, have been extremely tough to approach. On the one hand, clearly because of their leading role and on the other, because of the security rules and procedures their staff and police has to respect — in fact, wherever they went, they were always surrounded by security.

Then, what to say about the most in tune? I cannot choose just one name as many politicians I interviewed proved to be up to the challenge. But I can disclose that among the center-right parties Giorgia Meloni, Matteo Salvini, my friend Antonio Razzi and even the former senator Denis Verdini were not bad. On the other side, instead, I would mention Pierluigi Bersani and Matteo Renzi’s performances.

What musical differences did you notice among different political groups?

I have noticed that usually politicians of the left choose songs of leftist artists such as Fabrizio De Andrè, Francesco De Gregori and Francesco Guccini, most of which are foremost singer-songwriters, while conservative politicians enjoy pop songs more.

According to your own experience, what position do you believe Italian politicians are placed in, regarding their knowledge of foreign languages, both in Europe and internationally?

Obviously, it depends. I believe that the new generation of politicians speak English quite well. Let me bring a concrete example to the readers: both the Mayor of Rome, Virginia Raggi, and our Prime Minister Giuseppe Conte, have a nice flow in the foreign languages they speak.

Online there are many video remixes of Italian Prime Minister Giuseppe Conte. The original tracks are modified, employing, for example, different clips taken from Conte’s conferences and his television appearances. You, instead, managed to make him sing in person: could you reveal to our readers how Giuseppe Conte is in the flesh, also telling us some anecdotes?

Yes, I had the chance to meet him in person. I have to say that he is absolutely a nice person, but I have to admit that he is also a perfectionist. I can reveal to you ahead of time, as no one until this moment knows it, that the Prime Minister was not satisfied about his performance. Just a few minutes after our singing interview, one member of his staff texted me these exact words: “the PM wants to sing the song again!” This is an example of how he is a perfectionist. In the end, however, he decided not to re-record the interview simply because other journalists present while he was singing had already posted videos online.

There are many young people whose dream is to becomie a reporter, exactly like you, and interview politicians and other VIPs. What advice would you give them? What are the mistakes they should avoid?

My suggestion to them is to try to be as spontaneous as possible, finding original ways to approach politicians and famous people in general. Remember to always be respectful and always keep in mind not to adulate them too much. In my experience I noticed that politicians appreciate a person more if they are just themselves. You shouldn’t be too formal nor too informal. Just try to find the right balance and you will rock it.

Let us close this interview with a question related to future projects: who would you make sing in the international world?

I have to admit that I was already thinking widely and internationally about new possibilities before the outbreak of the Covid-19 pandemic. I can reveal to you and to all readers that I was trying to contact the American politician and senator of Vermont, Bernie Sanders, who according to my personal opinion, would have been the best candidate for the Democratic Party in the run for the 2020 United States presidential election. Unhappily, as we all know, he withdrew in favor of Joe Biden. Anyway, for the future I am also working to reach the Pope — yes, you read that right! Maybe you do not know that His Holiness used to be in a rock band before coming a priest!