My Encounter With The Carabinieri

Carabinieri jokes are ensconced in an old tradition of gentle anti-authoritarian humor and sentiment. But to be honest, I admire their charm. 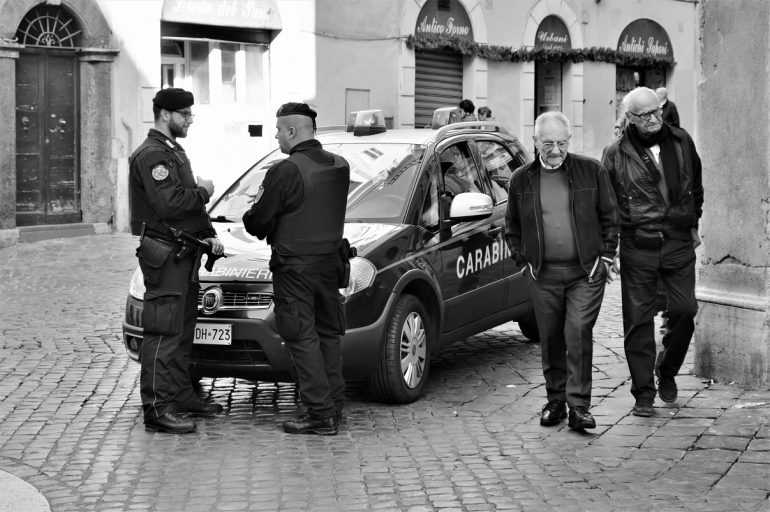 Carabinieri jokes are ensconced in an old tradition of gentle anti-authoritarian humor and sentiment. But to be honest, I had the chance to admire the men and women in uniform who serve and protect us.

“Why do carabinieri always work in two? One reads and the other writes.”

It is an old joke, one that is ensconced in an even older tradition of gentle anti-authoritarian, and specifically anti-police, humor and sentiment that is universal. But to be honest, I admire the men and women in uniform who serve and protect us. So I was flattered and delighted to have had an interesting encounter with two such public servants, and I shall recount it here. When? Not too long ago. Where? In a small village outside of a small town in the middle of Italy. If you look sideways and say my name, you will get it.

Three or four times a week I would walk the two kilometers into town to do my shopping. It was a two lane state highway and to preserve life and limb I always walked on the shoulder of the left hand lane, facing traffic. Going into town, this was not a problem, as there was plenty of room where I could walk out of harm’s way while still staying on a paved surface. Often I would zig zag a bit to maximize the road’s walkability: a stretch of sidewalk just after leaving the house, a zig to the other side to avoid an embankment, a zag at the gas station to take advantage of a guarded sidewalk, a zig at the garden store where the sidewalk ended, across a bridge that passed over a little creek, and then onto a great little bakery where I bought my daily bread (they also operated a mobile service for days when I couldn’t make the walk), then maybe the fresh pasta place, then maybe the fruttivendolo, then the supermarket with the cute commessa, then the other supermarket where I actually bought my groceries, then maybe the ferramenta or the farmacia or… all together it took me the better part of the morning to make the trek and do my shopping.

The problem was on the way back. Whereas going out I could do a fairly good job of walking and staying out of the way of speeding automobiles, or at least keep my eye on them, I could not do that on the return trip. The embankment that I mentioned before, which topped out a good two meters above the road, edged right up to the asphalt and left no space to walk, so I had no choice but to traipse up on top of it for several hundred meters. I actually did not mind, because the view it afforded me was quite pleasant, consisting of an expanse of agricultural land that was alternately given to olive groves or left fallow and wild. To my left and behind me was a tall and brooding mountain that was my view on the way in — dramatic and impressive, and often shrouded in clouds and fog, but never a cheerful scene. It was what greeted me on my walk into town.

The embankment was actually the edge of a farmer’s field, and I tried my best to stay as close to the road as possible. There were road signs posted along this stretch, so I did not feel I was trespassing, and besides, I was just passing through. Nevertheless, I must have been easy to spot, elevated as I was, and the lone walker on the highway, because I alerted someone who I think must have called the police, suspicious pedestrian that I was.

One morning I noticed a marked midsize SUV drive by me, in the lane across the road, and then double back to get another look at me, and then after turning around again, driving past me on the far lane as they did before. I knew they were checking me out, but was not worried, because I was not doing anything illegal, especially given that I had not even reached the embankment at that point. The two carabinieri must have followed me as I walked out of town.

I thought no more about them until, after the embankment, and then almost at my house, I saw them, parked on the other side, talking to a man, and apparently waiting for me. I decided I would not assume anything and prepared to walk past them.

Da dove sei?, said one of the carabiniere, with a beard, approaching me.

I unzipped the breast pocket of my raincoat on the left, extracted my passport, and handed it to him. He took it and went to the open hatch of the patrol car, where he had an array of computer and other communication equipment.

Sei qui in vacanza? This was the other carabiniere now, no beard, heavier set.

Carabiniere 2 nodded again. I noticed that he had a large cold sore on his lip, and I felt sorry for him. I was sweating bullets at this point and could feel the perspiration soaking the lining of my jacket.

A me piace molto il passaggio qua, le colline, i campi… Me.

Carabiniere 2 smiled at me and I smiled back.

Okay Thomas. Carabiniere 1, walking across the road and handing me back my passport.

The two carabinieri then crossed the road again to get back into their vehicle.

Quando parti? Carabiniere 1, turning back to face me.

Carabiniere 1 nodded and turned back to return to his vehicle.