Despite its decline, Venice teems with more and more cultural events. Covid-19 has temporarily changed all that, but this interim will very probably end when the virus emergency passes. 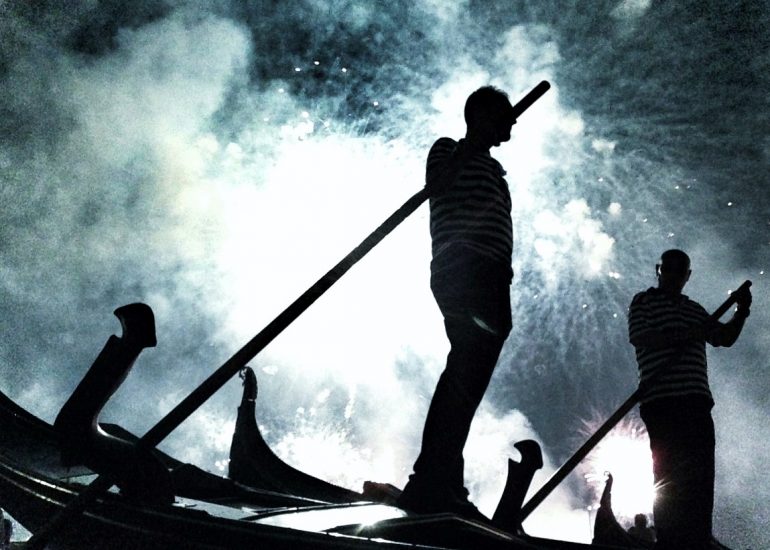 A blossoming of events and exhibitions even as Venice declines.

In normal times contemporary Venice teems with more and more cultural events, with conferences, exhibitions and film, modern art, music, theatre architecture and so much more. The traditions of Venetian rowing and sailing engage tens of thousands in regattas every year.

Covid-19 has temporarily changed all that, but this interim will very probably end when the virus emergency passes, and the city will again have to face a contradiction: How does one reconcile the thriving dimensions of Venice with its being trampled by mass tourism, losing residents at the rate of 1,000 a year and the growing threats from acqua alta floods and sea level rise? How is it that a city with can have such cultural strength even as it is, by some reckonings, inching towards depopulation, cultural self-annihilation and environmental disaster?

This is a contradiction that Venice lives with because the many faces of culture move at different speeds and down different paths through time. What thrives are those places, those activities and those parts that somehow still excite contemporary interest and fit into modern life. The obvious example is the use of the gondola, once for aristocratic travel, but now the engine of tourism, even if such re-purposing may bear the seeds of degradation; the gondola ride has mostly become a leisure activity worthy of a Disneyland — detached from daily life.

Take also great monumental buildings. The monasteries of Venice, the great halls of the palazzi and meetings rooms of some of the scuole, beneficient societies in historic Venice, for example, some vacant or used as warehouses for years, have found new life as museums, exhibition centers and even wedding venues. They delight the international crowds who flock to Venice. But of course, not all buildings have found a place, with scores of lesser known palazzi shuttered, and gigantic structures in the old Arsenal still in ruins. Others have been rehabilitated out of the generosity of benefactors, but remain under-used, such as the Tower in the Arsenal; or they have been remodeled in ways that many believe demeans their historical value, such as the Fondaco dei Tedeschi conversion to a shopping mall. Many, many historical palaces converted to hotels have survived but only due to refurbishments that have cut them up into hotel rooms, each with a bathroom, in conversions that can weaken the aging structures. The survival of the heritage buildings, even structures like St Mark’s Church, is under pressure due to the excessive numbers of visitors every year.

A similar principle lies behind the survival of intangible heritage, as it is called, the people with traditional skills — artisans, artists and others who are charged with the upkeep of Venice and its traditions. Artisans, who once numbered in the many thousands, are makers of gilded picture frames, wooden boats and terrazzo floors. Picture frame makers have found fewer buyers for their elaborate, carved creations — now far too costly for a public used to posters put up with tape. But some makers of the palazzo floors have found a market for their work in smart Milanese homes, while the interest in rowing has boosted artisans who make oars, the shapely forcola oarlocks used on row boats — and now also for pricy sale as art objects. At the same time, skills for making many traditional wooden vessels have been pushed out by less costly fiberglass productions.

The other arts follow similar multi-speed paths as a globalized Venice moves away from its community roots. Of the hundreds of gardens, most hidden behind palazzo walls, many are threatened when hotels take over and love of the natural beauty comes after corporate profit. But the stately Royal Gardens was reopened in 2019 after a five-year renovation thanks to corporate donors. On the gastronomic front, restaurants have burgeoned with 30 million tourists visiting annually, but of the some 1400 restaurants, only 30 or 40 have any claim to quality.

High culture has also thrived, with Venice’s Biennale growing from strength to strength, with art, architecture, dance and music from all over the world, while the famous La Fenice theatre hosts opera with tickets going for astronomical prices. Great exhibitions frequently come to the city, bringing together not only art of Venice, but, for example, telling the story of artisanship in the modern day. Even the writers of Venice are working overtime, producing hundreds of stories and titles every year, and continuing the city’s long literary history. But for the most part the 10% of tourists who consume culture are only interested in the repetitive programs of Venetian favorites: Vivaldi’s Four Seasons and plays by the 17th century playwright Carlo Goldoni.

“This moment is highly schizophrenic for Venice because it is ‘the best of times and the worst of times’,” Venice University professor of literature Shaul Bassi told me in an interview not long before the virus emergency. “From a social perspective it’s the worst ever, because our society becomes ever smaller and angrier. But from the cultural perspective it’s a magic moment because every day there is a new museum, a new exhibition, a new spectacle.” Venice may be losing it tranquility and may even hollow out its traditional community and culture, but its beauty along with artistic heritage still powers it forward.