Empty Italy: The Museum Of The Other And The Elsewhere

Residing inside the cosmopolitan fortress of art is a fusion of visuals and people that portray the advocacy of The Museum of the Other and the Elsewhere. 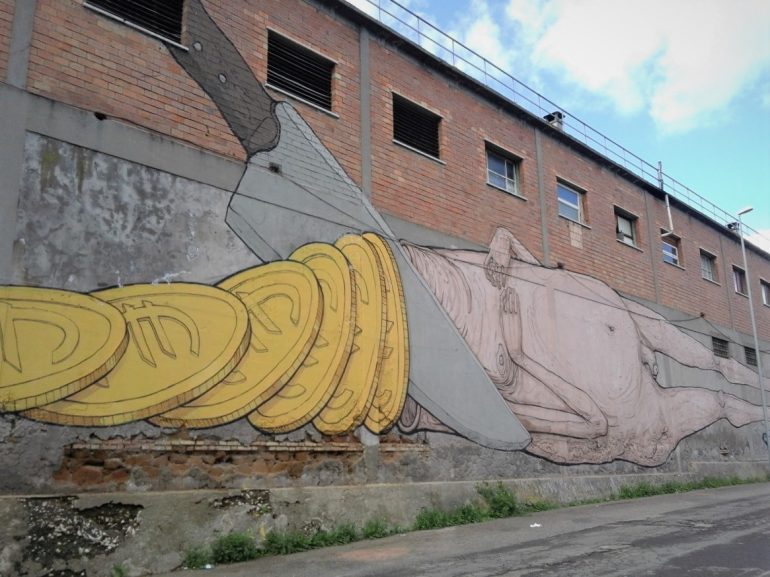 The Museum of the Other and the Elsewhere. Nicholas Gemini, CC BY-SA 4.0, via Wikimedia Commons.

A cosmopolitan fortress of art and community sits at the edge of Rome. It houses an array of artistry that is plastered on the walls, covering up the cracks and holes the cement has endured throughout the decades. While the works of art glisten before the audience who drops by as part of their day-trip or week-long itinerary, voices of children and adults residing inside form an amalgamation that acts as the background music to the sanctuary. The fusion of the visuals and people portray the reason The Museum of the Other and the Elsewhere remains the guardian of human rights.

Nestled in the Eastern suburbs of Rome, the then abandoned salami factory experienced a total makeover that hurled its name on a pedestal it’s known for today. In 2009, a united community of 200 migrants, of which 70 were children, from South America, Africa, Eastern Europe, the Middle East, and even Italy sought refuge in the place and turned it into their home, brushing off the scenarios of lying on the streets with cardboard below their bodies and a tattered blanket to clothe them.

In 2011, curator and anthropologist Giorgio di Finis stumbled upon the factory and envisioned a treasure trove that would prosper in the following years. Carlo Gori, a multidisciplinary artist and curator who’s involved in the works at the museum, shares that Finis’ intervention proved to be a salvation to the crumbling salami factory. In an interview with Romeing, Gori said that the Municipality of Rome targeted the museum as an establishment to be demolished. While diplomatic conversations could have taken place to sort out finding a new residence for the migrants, Gori implied that it wouldn’t have been an option on the table. He shared that when the police wanted to evict the squatters illegally residing in a place, they would tear the walls down to guarantee that it would no longer be feasible to live there. Before such a cruel act occurred, Finis stepped in to rescue the migrants’ last hope.

For the walls to survive the wrath of the bulldozers, ornaments considered beyond crucial must take place. From such a perspective, Finis tapped artists across the globe to bring over their artistic flair and lavish the walls with their eloquence in art. These artists landed in the museum and painted the walls with their works of art. The culmination of the curation has led over 500 artworks drawn by over 300 artists that cost more than 150,000 euros. If the police force ever destroys the property to send a message of eviction, a hefty fine and bureaucratic whiplashes will be delivered at their doorsteps.

The volunteerism of the artists nourishes the once bleak space with vivid imagery and lucid colors. The artists themselves have crafted a nook with the migrants, sharing multicultural stories with them while building bridges that intertwine diverse backgrounds in a single pot. The museum has brushed off its form of singularity to pave a path to a collection of artworks and conversations that treat it as a second home.

From the outside, the walls are covered with bricks, showcasing their faded tone of orange as a sign of exhaustion. The second tier’s facet glows with an envelope graphic and dozens of stars glimmering over its black paint. From afar, it shoots a message of the magic to come once the front doors of the museum begin to creak and open.

The interior aesthetics form a kaleidoscope of visuals and fall short with its attempt to shape a singular theme across the space. Torn and used furniture accentuates the raw beauty of the museum slash residence. Molds, rust, and dripping paints complement well with the art pieces that clings into the museum. There’s a wall with a colossal blue-green splat-like paint over which polka dots pepper the color with paintings inside their circle. On the other side, an artist takes advantage of the white walls by designing a mountain covered in snow. In one room, bubblegum colors fleck the image of children hanging around and enjoying the slides and swings in the playground, their eyes underscoring a glint of happiness.

What defines the history of the museum finds itself painted on a wall on the ground floor. As an old salami factory, an artist pays homage to the place’s roots by designing pinkish pigs dangling over hooks as if they were about to be carcassed and delivered to the market. Above the drawings, real remnants of the salami factory punctuate the culture as some of the slaughterhouse’s chains and machinery escort the art.

The museum is open on Saturdays and during special occasions organized by Finis and his team and collaborators to provide privacy to the residents. While there’s no entrance fee, visitors are encouraged to donate to sustain the lives of those who live there whether they’re breathing or decorated on the walls.

Building a community might only mean flocking towards a space and taking part in its everyday life. While such notions have been part of the museum’s ethos, the migrants expand their beliefs as they conjure bonds that connect one culture to another, harness art as a blanket to cradle to, establish relationships that conquer challenges, and echo voices that deserve to be listened to. If the question “How does a community form?” ensues, one should turn their eyes towards The Museum of the Other and the Elsewhere to find the answer.