Why many Italians despise Halloween, without even knowing what it symbolizes. 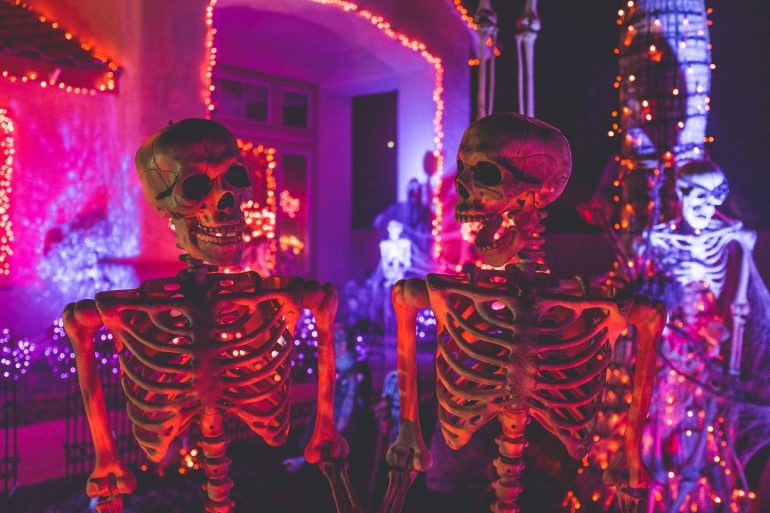 Two skeletons in a Halloween party. Photo by NeONBRAND.

It is no surprise that Vincenzo De Luca, the now world-famous Governor of Campania, is coming back to the spotlight during this second wave of Covid-19. Indeed, last spring, in the throes of the pandemic, his popularity skyrocketed among foreigners when he posted on Facebook a video in which he asserted that he would be “sending the police over to graduation parties with flamethrowers.” His outburst was shared on Instagram by a massive amount of people, and even by supermodel Naomi Campbell, who remarked that Americans should listen to people like him to tackle coronavirus.

More recently, he climbed the trending topics once again for taking it out on Halloween while announcing an ad hoc October 31 curfew to curb the spread of the virus. So, he ended up making the headlines on the Independent and other international publications for calling Halloween as a “huge American bullshit.”

Unfortunately, this is nothing new in Italy. Giving Halloween a bad name appears to be a periodic priority among Italian columnists and pundits. Last year, an impressive show by Mario Giordano, anchorman of the tragicomic, pro-conservative TV program Fuori Dal Coro, took place precisely on October 31. In the prologue of the show, he smashed a pile of Halloween pumpkins with an Italian tricolor club saying “I want to celebrate the dead, not Halloween.” But what might seem a ridiculous externalization of an eccentric journalist, actually reflects a common thought.

So let’s find out why many Italians, especially the elders, despise Halloween without even knowing what it symbolizes.

Between consumerism and paganism

Although Italian Catholics are dwindling (-8% between 2014 and 2019), there is no doubt that Catholicism still shapes social and cultural attitudes in Italy. Since the number of atheists is growing, many Italian conservatives are aching for a pure Catholic and patriarchal State. The controversial 2019 Family Day in Verona represents a perfect example of this conservative backlash hitting Italy.

Amidst this ugly scenario, many reactionaries in Italy find the time to wage a holy crusade against Halloween. Many priests trashed Halloween as a “diabolic feast,” while others hammered it as a “pagan celebration.”

In addition, there is no shortage of criticism regarding its consumerist nature. It is true, indeed, that Halloween represents a gold mine, especially in the US, but also in Italy. Last year, for instance, Americans splashed out almost $9 billion for the occasion, whereas Italians ‘only’ spent €275 million. However, we have to remember that every holiday represents a godsend for commercial activities. For example, in 2019 we spent €5 billion for Christmas and €1 billion for Easter, making big stores even wealthier — but also helping smaller ones.

Italians, well distant from any kind of Calvinist influence, still need to accept that Halloween is first and foremost a business opportunity, like any other holiday. But that’s not all.

Halloween and its original meaning

Legend has it that Halloween finds its roots in the Celts, an ancient population living in the British Isles. These peoples used to celebrate the festival of Samhain on the day corresponding to the current November 1. According to historical sources, Celts lighted bonfires to scare evil spirits, and wore masks to avoid being recognized by ghosts. ‘All Hallows Eve’ was the evening before November 1, and later on its name became Halloween.

On the other hand, the use of pumpkins comes from the Irish myth of Jack O’Lantern, who dared to challenge the devil three times before being cast out of hell after his death. Since then, Jack is roaming the Earth at night with a burning coal inside a carved-out turnip. Inspired by the story, not only people started to carve scary faces on turnips, but they also brought the tradition across the pond, when the first Irish immigrants came to the US and started carving native pumpkins instead of turnips.

Halloween haters don’t know it all

For some, these stories make up the perfect arguments to point the finger at Halloween and its sinister origin. Interestingly enough, though, we can find similar, secular traditions in southern Italy, where people used to carve pumpkins and light them with candles to drive away evil spirits. In particular, children from Serra San Bruno, an ancient village in Calabria, have been engraving pumpkins as skulls for centuries. Moreover, children used to get around the town asking “Mi lu pagati lu coccalu?” (‘Can you please pay me for the skull?’ in ancient Calabrian dialect).

We can find similar traditions in other places across the peninsula. People from Orsara, Apulia, celebrate November 1 with pumpkins and unusual ceremonies. In particular, local Catholic congregations walk around the village asking for food to worship the dead. Besides that, people put candles inside carved-out pumpkins, so that ghosts can’t take part in the banquet. This celebration attracts every year at least 20,000 visitors eager to live an ancient, evocative ceremony like few others.

Holding Halloween responsible for its satanism is silly, especially considering that, in the past, Italian Christians used to celebrate the dead with pumpkins and candles against ghosts. Nobody should attack youngsters for their ‘trick or treat’ or because they wear horror costumes. Nobody is tempting our youth with pagan cults worshipping devils. So keep calm, it’s just a holiday.