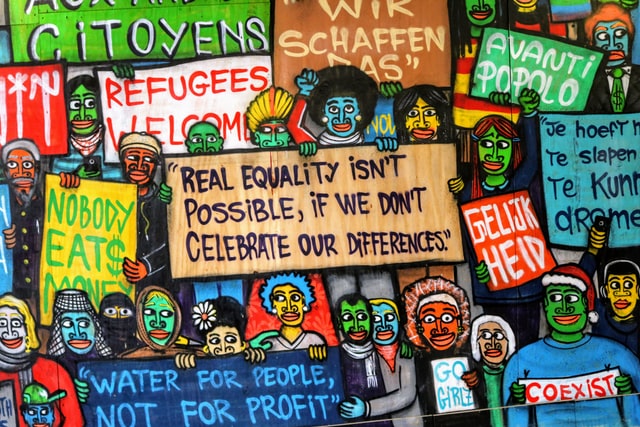 A picture of the humanity wall in Ghent, Belgium. Photo by Matteo Paganelli.

In the uncertainty of the COVID-19 pandemic, it is easy to forget the other challenges our world is facing. The flawed European immigration system seems something we cannot deal with while facing a pandemic. Yet it is something we cannot oversee, as the consequences of ignoring this issue will likely haunt our society in the foreseeable future.

But what is it exactly that we should look out for in Italy?

The two Security Decrees are a controversial package of measures that the former Deputy Prime Minister and Minister of the Interior Matteo Salvini signed. This happened in 2018 and 2019, while he was still in government with the Five Star Movement.

Both texts have recently been superseded by a new decree signed by the new Minister of the Interior, Luciana Lamorgese. The moderate left-wing electorate welcomed her coming into office with high hopes. Indeed, many Italians wished for an approach that moved away from Salvini’s anti-immigration rhetoric.

Although the decree comprised provisions on a variety of items, namely public security, prevention and fight against terrorism and mafia crime, the part that sparked more debate was the one about immigration.

Among the most controversial changes, there was the abolition of humanitarian protection for foreign citizens. Another issue was the detention of asylum seekers in the repatriation centers. This doubled from a maximum of 90 to 180 days.

Moreover, Salvini decided to abolish the so-called SPRAR system regarding the reception of people seeking asylum. The small centers hosting asylum seekers, under the aegis of municipalities, would no longer be able to receive them. On the contrary, they would only host unaccompanied minors and those who have already received international protection.

At the beginning of June, the government also approved a second text, the so-called Security Decree bis. In this Decree, once again, Salvini pointed the finger at immigration.

A new beginning for our immigration policies?

In October 2020, the second Conte government supported by the Democratic Party and the Five Star Movement, modified the Security Decrees after intense pressures from NGOs and center-left political parties.

On top of that, part of the decrees was declared unconstitutional, more specifically the ban on the registration of asylum seekers. Therefore, after judgments of the Court of Appeal, which in recent months accepted appeals and has been ordering municipalities to proceed to the registration of applicants regardless of the decree, it was finally decided that the first security decree is unconstitutional for the violation of Article 3 of the Italian Constitution. This verdict acquires particular relevance now that the process of amending the security decrees is finally over.

The new security decree recently approved by the Council of Ministers chaired by Conte, on the proposal of the current Interior Minister Luciana Lamorgese, intervenes on the tightening of the so-called humanitarian protection and other issues, such as the fines against NGOs and the reception system. Many observers have welcomed the amendments as a step forward, especially in the already shaky reception system.

UN Refugee Agency (UNHCR) representative for Italy, the Holy See and San Marino, Chiara Cardoletti said that UNHCR believes this recent reform will benefit the country, stating that “the revision of the decree will not only provide an easier life for the beneficiaries of protection or for asylum seekers but for Italian society as a whole, because if we make integration difficult the problem of badly managed immigration will grow.”

Do these amendments actually give a positive push for more efficient immigration policies and a more open society?

According to those who work in the field, this is not truly the case. The amendments certainly make the decrees better, especially when compared to the previous ones. Nonetheless, they are not the ultimate solution to migration issues in Italy. Even before the two Security Decrees, Italy has never been among the top countries regarding immigration policies and, during the peak of the migration crisis, the flaws of our system were taken to their extreme consequences. As a Médecins Sans Frontières (MSF) report stated, in 2018,10,000 people were living in inhumane conditions in Italy because of inadequate reception policies.

We all remember the sense of shame and disappointment when it was clear that Italy was not offering decent living conditions to people seeking asylum in 2015-2016.

In general, the European Union’s approach to migration has created a real crisis of solidarity, without a properly working system through which its Member States can share responsibility for hosting migrants fairly and adequately. Member States on the EU’s southern border, first of which Italy, call for greater shared responsibility for migrant arrivals, but other members like the Czech Republic, Hungary, and Poland refuse to support any form of solidarity mechanism.

Simultaneously, the European Commission, which is also a source of extreme political disappointment among many — even among those who are not Eurosceptic, is pushing for reforms that would increase the role of what it calls ‘safe third countries’ in hosting migrants.

This approach comes at a cost

On humanitarian grounds, not all third countries are safe. For example, the UNHCR has already stated that it does not consider it appropriate to designate Libya as a ‘safe third country’. The UNHCR made this clear even before the current unrest and insecurity in the area. This decision was taken in light of the “absence of a functioning asylum system, the widely reported difficulties and abuses faced by asylum-seekers and refugees in Libya, the absence of protection from such abuses, the lack of protection against refoulement, and the lack of durable solutions.”

Moreover, leaving people in the hands of third countries has hardly been a solution so far. This has been perfectly exemplified by the recent EU-Turkey relations. Turkey currently hosts around 4 million refugees and it has been threatening to reopen the migrant route from the Middle East, which at its peak in 2015 resulted in thousands of people drowning in the Mediterranean Sea and about 1 million people reaching Greece and Italy where many still live in crowded displacement camps, as this article from Guardian has exposed. This is without considering the issue that for many, Turkey cannot be considered as completely safe for people migrating there either, as human rights lawyers have repeatedly argued.

We need immediate action from our government and the EU

It is important to act now to improve as much as possible our immigration system, for many pressing reasons. First, no country can really think of having overcrowded reception facilities during a pandemic. The obvious consequences can be extremely dangerous and damaging to everyone’s health and safety.

There was already anger among Italian local mayors in August this year, a resentment aimed at the Italian government. Cities in southern Italy are reporting unbearable conditions in hosting facilities that are small and overcrowded.

Secondly, it is more than likely that the number of people coming to Italy will not decrease any time soon.

The world is witnessing a global push for migration, with people still on the move despite COVID-19 restrictions.  More than 13,000 migrants have reached the Italian shores this year via the Mediterranean Sea. That number is about 9,000 more than last year, taking into consideration the same period.

The 12th Annual ASDA’A BCW Arab Youth Survey has reported that nearly half of 200 million young Arabs in the MENA region have considered leaving their country, frustrated with struggling economies and widespread government corruption. The desire to leave is most prevalent among youth in Lebanon, Iraq, Jordan, Syria, Yemen, and Palestinian Territories.

This should be something worth flagging, as in the second quarter of 2020, citizens of 129 countries sought asylum for the first time in the EU, with Syrian being the top citizenship of asylum seekers, followed by people from Afghanistan, Venezuela, Colombia, and Iraq.

Migration has become something intrinsic in our society, a defining feature of our century, whether we like it or not. Italy should adapt to this reality and act quickly. We should avoid another migration crisis that no one involved in the asylum process deserves to experience again. Italy can learn many lessons from the tragedies and mistakes of 2015. It is crucial to make sure no one has to suffer again. This is especially important in a continent that prides itself to be the pillar of equality in the world.