The tragic story of Beatrice Cenci is recalled as an emblem of the sixteenth-century bloodthirsty and corrupted city of Rome. 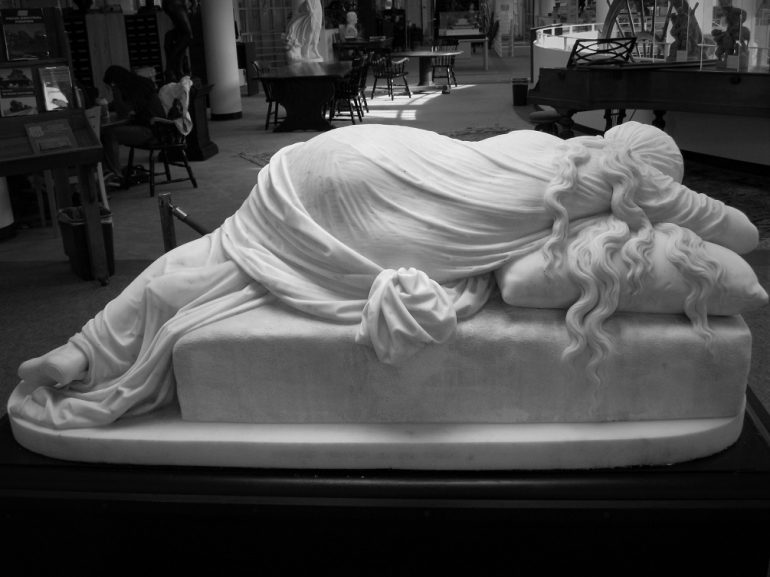 Beatrice Cenci was accused of patricide and sentenced to death. Five centuries later, she is recalled as an emblem of the sixteenth-century bloodthirsty and corrupted city of Rome.

She was accused of patricide, tortured and sentenced to death. Five centuries later, Beatrice Cenci is recalled as an emblem of the sixteenth-century bloodthirsty and corrupted city of Rome. In the words of the French poet Joachino du Ballay, who visited Rome in 1551, “there is nothing you cannot obtain here either through courtliness or a few bags full of coins: justice, privileges and women may be bought.”

It is impossible to speak of the Cenci affair without being overly factious. The period in which the facts took place, the characters involved, the trial proceedings themselves did not allow for an objective and unbiased sentence. So much so that the Pope and the Cenci family represented opposite ideologies: either with the Church or against it, in a Guelphs and Ghibellines setting.

At 9:30 a.m. on the morning of 11 September 1559, justice ministers had Beatrice’s brothers Giacomo and Bernardo removed from the Tor di Nona prison. They were loaded onto a cart accompanied by brethren belonging to the Compagnia della Misericordia confraternity, who had the privilege of accompanying those sentenced to death all the way to the gallows. Giacomo, bound up and bare-chested, was tortured with a pair of pliers used to tear away his flesh. Bernardo, who was granted with a pardon, witnessed his brother’s butchering while shrouded with a black cloak that covered his face.

The Court was at the head of the cortege following close behind, along with soldiers, the police and throngs of common folk. Once the gloomy procession left the Tor di Nona prison, it proceeded along Via Dell’Orso, Piazza dell’Apollinare, Tor Sanguigna all the way to Corte Savella, then went past Palazzo della Cancelleria, Piazza Farnese and ultimately made its way into Via di Santa Maria di Monserrato. This is where the cortege came to a halt, collected Lucrezia and Beatrice and then led them to the bridge.

The procession made its way through the most beautiful and populated streets of Rome, full of palaces with an incredible number of people facing out of their windows, with as many people flowing like a river down the roads towards the square adjacent to Ponte Sant’Angelo — the place of execution. The people sided with the Cenci family. They reprimanded Pope Clement VIII for not having defended this family, for not heeding the reasons of this poor girl who was the victim of her father’s abuse and cruelty. Twenty-two-year-old Beatrice seemed younger than her age and she aroused great commotion, especially on the part of women. She aroused tenderness with her beauty, her childlike grace and long blonde hair. She walked unperturbed through the crowds, marching straight ahead towards her death. She faced the torture with courage and pride.

Pope Clement VIII was an excellent jurist, showing no mercy against the bandits and public/private crimes that tormented Rome, yet he did not win over any popularity or the favours of the people with Beatrice’s death sentence; nor subsequent to the confiscation of the family’s estate, which was in part acquired by his nephew Cardinal Aldobrandini.

The public event was about to take place at Ponte Sant’Angelo, upon the high gallows on the left bank of the Tiber River. Suddenly silence fell over the loud crowds coming from all parts of the city. People awaited the execution for six hours, under the scalding sun. Some of them died. Livid with rage Lucrezia, Beatrice’s mother, hurriedly climbed up onto the platform to get it over with and immediately placed her head upon the block. Then came Beatrice’s turn, who uttered the names of Jesus and Mary out loud as she laid her head down upon the block. Beatrice’s head was placed upon a silver tray and buried alongside her body in an apse recess of the San Pietro in Montorio church where, from that time onwards, a mass dedicated to her is celebrated annually on September 11.

What crime had poor Beatrice committed? Her father Francesco Cenci had a violent and perverted personality. He was born out of wedlock to Monsignor Cristoforo Cenci. Francesco used to wander around Rome at the age of thirteen, engaging in brawls to defend himself from people who would call him a bastard. He had thrown a poor little farmer boy into the Tiber River just for the sheer fun of it; he also gave vent to his brutality against servants, not making any distinction between males or females.

Following the death of his wife, poor little Beatrice was forced to enter a convent. This proved to be the only carefree time of her life as she was far removed from her grim family setting. She returned home once she came of age, but it was easy to guess what was in store. Her father stormed into Beatrice’s bedroom, intending to rape her. She struggled with all her might and managed to flee through the reedbeds along the Tiber. Her refusal led her into being confined to her room. Even a poor deaf-mute girl was subjected to Cenci’s violent abuse.

Francesco Cenci was imprisoned for two years, but bribe money equal to 100,000 crowns passed under the nose of Pope Clement VIII and it was enough to commute his punishment to parole and house confinement — allowing him to take up the violence where he had left off. He subjected his daughter to humiliating practices, forcing her to scrape scabies off his body and anoint even his genitals with balsamic oils. The ultimate tragedy took place in Rocca Petrella, a town located high in the Abruzzi mountains, where Francesco Cenci had his wife and daughter locked up. While sleeping in his bed, on the dawn of 9 September 1558, Francesco Cenci was slain with a hammer and a rolling pin in his Manor. The official version declared he had accidentally fallen through a hole on the balcony that faced upon a vegetable garden.

The wheel of justice began to roll. Francesco Cenci’s body was exhumed, making it clear that he did not die an accidental death but proving that his skull had been bashed in. Trial proceedings are the main source of information regarding the event. The law was relentless in accusing Beatrice of the crime. The Pope and the Court availed themselves of confessions extorted by torture. She did not succumb to interrogations, holding her head up high as she endured torture. She was clear-headed, logical and managed to evade all their sneaky traps.

Her father was entirely instinctive, whereas she was entirely rational. Beatrice’s brothers and mother were also involved as accomplices of the crime. She was beautiful, passionate yet unlucky in life. But very lucky after her death, since she has been recalled by outstanding figures and hailed by people who have consecrated her a heroine over the centuries. She belongs to truth and to legend — both useful in never forgetting Beatrice Cenci.