It's time to dive into the depths, exploring the latest Italian Wonders underwater. 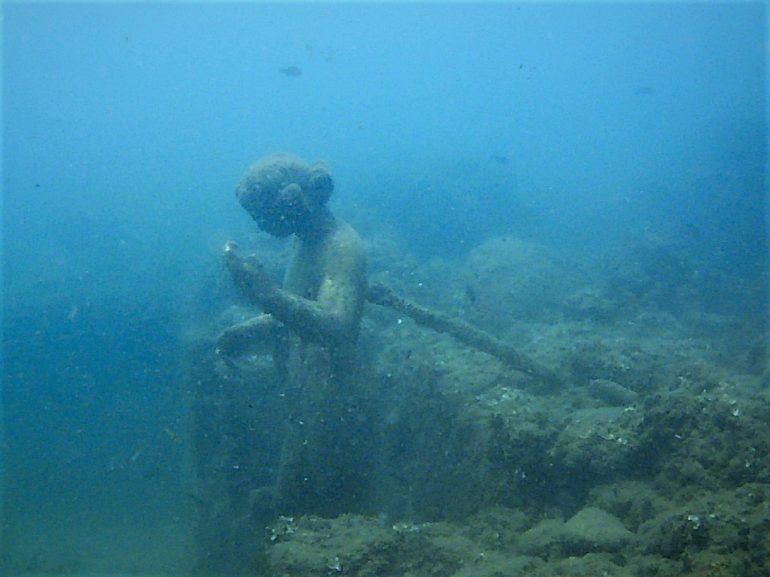 After having explored the Italian towns underwater in northern Italy, the compass of the wonders leads us southward, throughout central-southern Italy. Here too there are lovely lakes and submerged legends, until you get to what may be considered the ‘Italian Atlantis’, an ancient city sunk in the Tyrrhenian Sea. Are you ready to discover more surprises?

We are in Tuscany, in the Province of Lucca, nicknamed ‘the town of the 100 churches’. Vagli Sotto is a town on the edge of the homonymous lake of Vagli. But this is not a typical lake: it was created in 1947 by an Italian energy company, blocking the creek Edron with a 92-meter high dam.

In the depth of these waters a stone village lies well-preserved. Fabbriche di Careggine, the name of the medieval village underwater, was founded along the historical road Via Vandelli, which linked the Emilia-Romagna region with Tuscany, across the Apuan Alps. But those who settled here were not natives of the area, they were from the city of Brescia, in Lombardy. Brescia has always been the land of good hard workers, especially iron and marble workers. So in the 13th century, taking advantage of certain privileges granted by the King, this settlement of Brescian blacksmiths came here, unaware that 700 years later their houses, workshops (hence the name ‘Fabbriche’ which means ‘factories/workshops’), the mill, the cemetery and the church made their way to the lake floor.

An arrangement between the municipality of Vagli Sotto and the Italian energy company ENEL agreed to a lake-emptying every ten years, both to enable the inhabitants to visit their sunken memories and for maintenance of the dam. The lake of Vagli, however, was emptied just four times, the last one in 1994, attracting thousands of tourists and curious visitors interested in towns underwater. The next emptying should take place in 2021, and you will be able to visit the ghost village for the first time walking across a beautiful Tibetan bridge. Finally, the town of Vagli Sotto created the ‘Honor and Dishonor park’, an unique walk through symbolic marble statues of notable celebrities.

We are now on the shores of Lake Salto, in the province of Rieti, located in the Lazio region. This province was created in 1927 by the Fascist regime, on the territory of the ancient Sabina, an Italian region much older than Rome. Benito Mussolini, impressed by the beauty of this area surrounded by mountains, forests and valleys, decided to annex it to Lazio (before that it was split between Umbria and Abruzzo), defining it as ‘the mountain of Rome’.

The Salto river, running through the territory of Cicolano — the former border between the Papal States and Kingdom of Naples — was also involved in this change. Indeed, its waters were enclosed in December 1939, creating an artificial lake with a 90-meter high dam and a hydroelectric plant, which is also connected to the nearby Lake Turano. The old towns of Fiumata, Borgo San Pietro, Sant’Ippolito and Teglieto sunk into the water, and were then rebuilt further up the hill.

Although this wondrous project provided water to the houses and solved historical problems of flooding along the Rieti valley, Lake Salto forever changed the look of the villages, whose houses and workshops stood along the river. Many inhabitants preferred to receive money instead of a new house, by choosing to emigrate to bigger cities. Fiumata, being located further upriver than other villages, preserved the upper part of the town, which after 1939 became the lower part of the new settlement. Unfortunately, the 6th century church of Sant’Angelo was submerged: in its millennial-long history it was also burned down by the terrible Saracens.

During the summer, if the lake dries up enough, some old roofs re-emerge from the water. Just a hint at the towns underwater. Salto lake was also used as a set for the Italian film Siberian Education and the dystopian television series Hundred to go.  Lastly, the red chestnut of Cicolano is typical of this area, which has recently obtained the ‘Protected Geographical Indication’ mark by the European Union.

Here we are, finally about to discover the ‘Italian Atlantis’, the last of our towns underwater to explore. In the depth of the Gulf of Naples waters in fact an ancient Roman town lies. Baia (Baiae in Latin) may be referred to as the Porto Cervo or the St Tropez of two thousand years ago. During the Roman Empire all the eminent and richest people competed to build villas and spend their holidays here. Baia, not far from the Greek-Roman colony Puteoli (modern Pozzuoli) and well connected to Rome through the Via Domitiana, was even preferred to Pompeii, Herculaneum and Capri.

Surrounded by a breathtaking view, luxurious and good climate, Baia was also popular for its warm and natural thermal waters, as the entire area is over a supervolcano, known as the Phlegraean Fields. But nature gives and takes, so over the centuries the bradyseism phenomenon linked to volcanism caused a slow lowering of the ground, engulfing the coastline underwater. Thus, imperial villas, statues, mosaics and roads of ancient Rome went under the sea level, creating what is now the underwater archaeological Park of Baia.

Together with the neighboring underwater Park of Gaiola and Portus Iulius (the first port of the Roman western naval fleet) they are marine protected areas, representing an archaeologically unique and amazing case in the Mediterranean. On days with good visibility, you can explore the mystical seabed on a boat with underwater viewing, or — for the more experienced — through snorkeling or scuba diving. Unfortunately, part of these treasures have been lost before the establishment of the marine protected area in 2002.

The locals say that when the sea was quite rough, it wasn’t that hard to find archaeological relics on the seashore. Baia today is part of the municipality of Bacoli and some interesting remains of the ancient Roman resort town are still visible out of the water. On the tip of the town, the Aragonese Castle stands out magnificently: it hosts the Archaeological Museum of the Phlegraean Fields, in which some marvels caught from the water have found a new home.

And thus, starting from the popular Curon Venosta and having reached the little known Atlantis of Italy, we conclude our exploration of towns underwater. Hopefully this has revealed new places to visit and a varied and often complicated history of seemingly typical towns. Behind the energy needs or volcanic phenomena there have been stories within the stories. If anything, it demonstrates how there is much more to exploring Italy than what you see on the surface, literally.