The Fiume Question: A Curtain Raiser To Fascism

Fascism swept through Italy like a storm, but its rise was presaged by a quarrel over a small city on the Croatian coast. 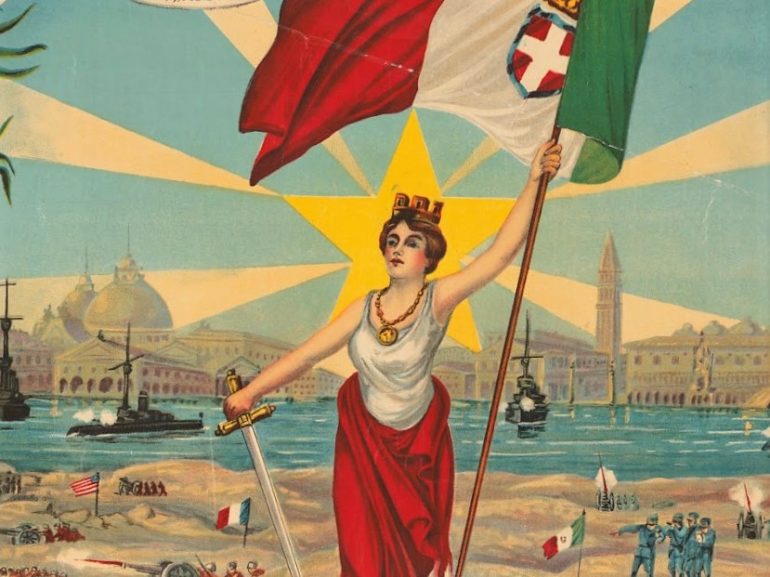 In November 1918, the Great War had ended at last. The Kingdom of Italy found itself on the winning side because of the cynical decision taken in 1915 to abandon its neutral stance and accept an attractive offer of the Triple Entente. By signing the Treaty of London, a victorious Italy would receive the cities of Trent and Trieste, South Tyrol to the Brenner, Istria and Northern Dalmatia.

Austria-Hungary, Italy’s historic rival and nearest threat, had been defeated. The Italian monarchy and her liberal institutions were respected and intact. Yet less than four years later, the Fascist leader Benito Mussolini was Prime Minister. After anoher few years, the old liberal order was no more. How did liberal Italy suddenly and unexpectedly collapse in her hour of triumph?

One major reason was that her statesmen lost at diplomacy just when it mattered most. Italy had won the war but bungled the peace, and bungled it spectacularly and publicly. Prime Minister Vittorio Emanuele Orlando and Foreign Minister Sidney Sonnino went to the Versailles Peace Conference in 1919 demanding the full terms of the 1915 Treaty. Most of these demands were granted, even when they ran counter to the ‘principle of nationality’ dear to the American President Woodrow Wilson.

But Wilson drew the line at Dalmatia, and the Italian delegation did not improve its bargaining position when it asked that the city of Fiume (Rijeka), the former Hungarian port on the Croatian coast, be added to the spoils. Fiume had not been mentioned in 1915, and it was not much use either, for Italy now had a much bigger Adriatic port at Trieste. But its inhabitants were mainly Italians, and they claimed the right to be included in the Kingdom as full citizens.

The Fiume question is essential to understanding the path that post-war Italian politics would take, because while it was unimportant strategically, it acted as a focus for the patriotic sentiment and romantic nationalism fostered by four grueling years of war, and which was waiting to burst into a dark cloud that would eventually cover the entire peninsula.

Sonnino was not too enthusiastic about Fiume. He only asked for it in order to strengthen his hand when it came to arguing over Dalmatia, whose splendid naval bases he thought were the key to the Adriatic. The Minister of the Navy agreed with him. The high-minded ‘democratic interventionists’ like Leonida Bissolati, however, held fast to the principle of nationality that was espoused in President Wilson’s famous Fourteen Points speech (which was a response to Lenin’s Decree on Peace of November 1917).

The army commander, General Diaz, agreed with the irredentists. He feared that Dalmatia would become for Italy what Ireland was to Great Britain, with the army having to fight constant guerilla campaigns against recalcitrant Dalmatian italophobes.

So the government wavered. At Versailles, it publicly demanded both Fiume and the Treaty; on the Adriatic, it intrigued with Croat and Montenegrian separatists, and tried to subvert the new state of Yugoslavia.

The result was a complete rebuff. President Wilson refused to concede either Fiume or Dalmatia. Sonnino and Orlando, affronted and embarassed, went back home and were greeted as popular heroes. Wilson, on the other hand, became Italy’s arch-villain. The collapse of Wilsonism had very important consequences for Italian politics: it destroyed the credibility of the interventionists and of the Allies.

Two months later, the Orlando government fell, with the Adriatic question still unresolved. Italy had acquired Trent and Trieste, and the Italian army de facto occupied Istria and Northern Dalmatia. But her Allies had failed her over Fiume — and also over the ex-German colonial territories in Africa, which the British and the French carefully kept out of Italian hands. It seemed, in Gabriele D’Annunzio’s famous phrase, a ‘mutilated victory’. Nationalists and many ordinary Italians greatly resented the sanctimoniousness of the Americans, the selfishness of the British and the French, and the feebleness of their own government — especially when, in June 1919, Francesco Saverio Nitti became Prime Minister.

Nitti was an economist, and like most devotees of the dismal science, he understood the regrettable necessities of being a weak economic power. Italy lacked coal and money, two elements only the Allies could provide them, therefore they could not be affronted. He and his Foreign Minister Tommaso Tittoni played down Italy’s claims, and the clamor of the interventionists grew. D’Annunzio called Nitti ‘Cagoia’ — or abject coward — and the nickname stuck.

Nitti also issued an amnesty for all wartime deserters, which incensed all right-minded patriots, and cut down military spending. This infuriated the Italian Right, especially the many new army officers. Soon, the loyalty of some army units was dubious, and soon a host of irredentist groups railed against what they perceived as being a spineless government.

In September 1919 D’Annunzio agreed to lead a military coup organized by prominent nationalists. army officers and industrialists. He marched into Fiume with 2,000 ‘legionaries’, mainly deserters or mutineers from the army. The ‘Comandante’ remained there for fifteen months, hurling defiance at ‘Cagoia’ and at Nitti’s successor Giolitti. Fiume became a symbol of patriotic fervor and youthful vitality. Futurists, ex-servicemen, nationalists, syndicalists, anarchists and adventurers flocked there from all over Italy. They swaggered round in cloaks and daggers, bullied local citizens and enjoyed themselves immensely.

The regime was a permanent festa, full of processions and ceremonies, of dancing and slogans. D’Annunzio’s idea of democratic decision-making was rather like Mussolini’s later on: long rhetorical speeches from balconies to the eager crowds below, punctuated by massive acclamations. D’Annunzio also invented many of the other trappings of the later fascist regime, including a militia as a political weapon, the Roman salute, the compulsory castor-oil purgation for dissidents, and even the meaningless warcry ‘Eia, eia, alalà’.

However, D’Annunzio’s Fiume was not just comic opera. He issued proclamations that he thought would have real-world significance. He founded the Fiume League, a kind of Anti-League of Nations for oppressed peoples, and he promulgated a ‘revolutionary constitution’, largely written by his syndicalist friend Alceste De Ambris. It proclaimed that Fiume was a ‘producers’ state’. Everybody was to be a member of one of ten guilds, or corporations, which would run the economy. The upper house of parliament would be elected by these corporations.

Initially here was not much the Italian governments could do. Nitti could not expel D’Annunzio by force, for the ‘invasion’ was very popular among Italians. The army in Venezia-Giulia had clearly helped D’Annunzio to prepare it, and it would certainly refuse to move against him. So Nitti ignored D’Annunzio as best he could, though he was a very difficult man to ignore. Giovanni Giolitti, who succeeded Nitti as Prime Minister in mid-1920, was more effective.

He negotiated directly with the Yugoslavs and, in November 1920, the two countries reached an agreement. The Treaty of Rapallo declared that Fiume was to be independent. Italy kept Trieste and Istria. In Dalmatia, Zara and four islands were to go to Italy, but the rest was to remain Yugoslav. The treaty was generally welcomed in Italy, and by 1920 most people had got bored with D’Annunzio. Like many fits of hysteria throughout human history, the characters involved eventually woke from their daze.

On Christmas Day 1920, Giolitti took the final step, and sent the navy in. D’Annunzio, the armed poet, surrendered immediately. The regime of the ‘Comandante’ was no more. Yet Fiume was an important episode. It was a symbol of the weakness of a government that allowed a frail and decadent poet to hold a city for a year, in defiance of its authority and of international opinion. It showed that the Armed Forces might prove disloyal, and that the power of mass politics could be harnessed by future demagogues in Italy and elsewhere.

D’Annunzio convinced many Italians that they had been robbed, and that daring and activism might win back what had been lost. The plight of Fiume would keep the spirit of nationalism well and truly alive, and would raise the curtains to a much darker period in Italian history.