Stracciatella: A Trinity Of Flavor

Stracciatella. A difficult word for many non-Italian speakers to pronounce, but one so worthy of the effort. 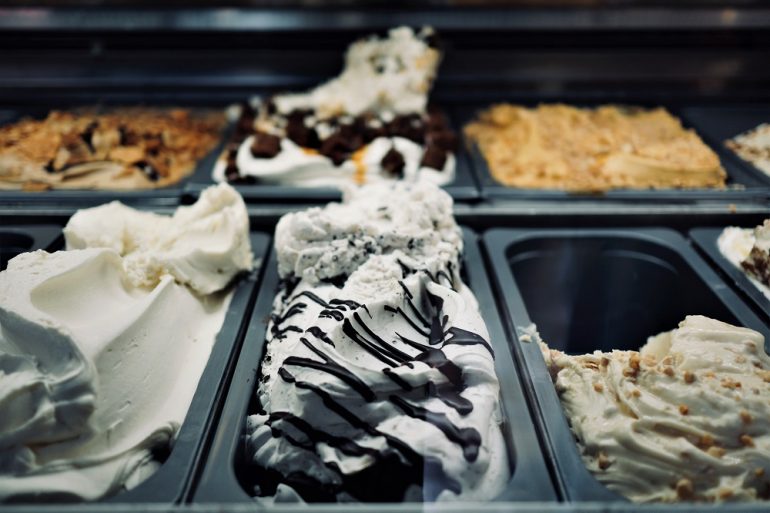 Stracciatella is ranked consistently among the top ten most popular flavors of gelato across the country.

Stracciatella. A difficult word for many non-Italian speakers to pronounce, but one so worthy of the effort. Most of our readers will know stracciatella as the delicious vanilla and chocolate flake gelato flavor, but there is more to the story. Stracciatella is a term that is used in Italy to describe not just a frozen dessert but also a soup from Lazio and a soft cow’s milk cheese from Apulia.

It is difficult to say whether the soup or the cheese came first. Both have been menu staples for at least one or two centuries, but we know more about the Roman stracciatella. At Christmas, many poor Romagnoli would enjoy a large pot of brodo di carne made from chicken or other affordable meat. Faced with days of leftover soup, they came up with the idea of adding beaten eggs, parsley, and grated parmesan to the mix. Not only did this lend richness and flavor to the dish, but it also resulted in a streaked look, and thus was dubbed ‘stracciatella’. The soup had several variants across Italy, with some Italians adding breadcrumbs, marjoram, or nutmeg. In Emilia-Romagna it was known as the ’soup of paradise’, which Pellegrino Artusi sneered at. Known as the ‘Father of Italian Cuisine’ for early cookbooks like La scienza in cucina e l’arte di mangiar bene, he wrote that stracciatella was “A substantial and delicate soup, but paradise, unless it is the paradise of Muhammed, has nothing to do with it.”

We move to Foggia for the next shard of the stracciatella puzzle. This region of Northern Puglia is well known for its cheesemongers, who have gifted the world with caseic delights ranging from caciocavallo to canestrato, and, of course, heavenly burrata. We can think of stracciatella as being the origin of burrata, as it was developed to save and reuse the leftovers of mozzarella production. Stracciatella cheese is obtained by collecting the fatty part of the remaining curd and mixing this residue with salt and fresh cream, which creates a sweet and milky delicacy. Connoisseurs note its versatility as a cheese, which can change in flavor depending on what it is paired with. Stracciatella goes well with everything from salad to pizza, and is often served for breakfast in Puglia alongside toast, prosciutto, and fresh fruit. From what we can ascertain, stracciatella cheese had similar beginnings to stracciatella soup, arising as peasants developed ways of preserving every byproduct of the cheesemaking process.

No Italian dining experience is complete without a scoop or two of gelato, so we travel north to satisfy our golosità. Enrico Panattoni was born in the Tuscan town of Altopascio on April 4, 1927. He spent most of his youth in the region, only moving to Bergamo after the end of World War II. At the age of eighteen, he collected his family savings of 180,000 lira and opened a pastry shop on Via Bartolomeo Colleoni in Bergamo’s Città Alta. The post-war recovery had begun spreading wealth throughout Northern Italy, and people were hungry for good food after years of deprivation. Panattoni initially planned to bake castagnaccio cakes and sell other chestnut products typical of Tuscany, but he quickly delved into other delicacies. Seven years later he purchased the existing establishment La Marianna, and began his foray into the art of gelato making. The early days were challenging, but Panattoni had a great partner in his lifelong friend and wife Oriana. Panattoni recalled that “In those years we were young, but we managed with Oriana as chef and myself as waiter. From our kitchen came the typical plates of our native land, like ribollita, fagioli all’uccelletto and costate.”

As Panattoni put it in an interview with L’Eco di Bergamo, “It went like this. My customers kept asking for stracciatella, in the sense of the Roman soup made with beaten eggs and broth. I was tired of making it, so I came up with the idea of stracciatella in a new form. I thought about it for a few days, and then one night put together the gelato recipe.” While it has been modified since then, stracciatella is most commonly made with fresh milk, egg yolks, caster sugar, gelatin, and alginic acid. Dark melted chocolate is drizzled over the cream base as it churns, which freezes into shards on impact.

Panattoni died in 2013 at age 85, and was mourned in Bergamo and beyond as one of the most influential food creatives of his era. His invention has really come to eclipse the soup and the cheese over the years, as stracciatella gelato can now be found in almost every gelateria in Italy. Stracciatella is ranked consistently among the top ten most popular flavors of gelato across the country, seen as a delicious but not overwhelmingly rich choice. Soup, cheese, and gelato share the ‘stracci’, but there is one clear winner in this three dish race.