Trieste's rice mill veered off to a dark path when war forced the Risiera di San Sabba to nod to carnage and blood. 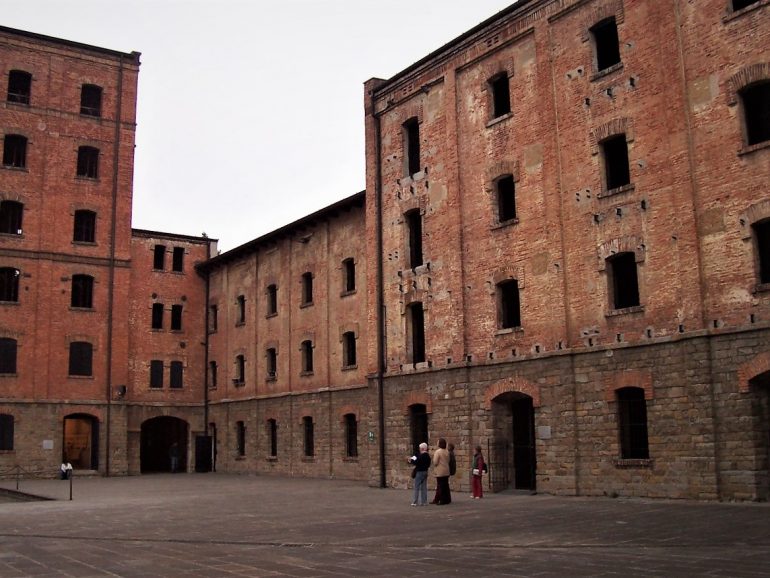 No institutional course can ever summon enough time and resources to master the art of false display. There’s a natural instinct that kicks in when a situation begs for us to wear our mask. It’s not the physical ornament that masquerades seem to worship, or that COVID-19 pandemic brought forward, but an inner intuition that resonates to a coping mechanism. Whether or not it’s to repress a dark secret that we hope no one will unfold, the mask clothes the intentions we fear unzipping to anyone. In Italy, an architecture asserts such use. Risiera di San Sabba knows how a mask functions, a cover-up to secrets no one dares to tell.

The Risiera di San Sabba, or Rice Mill of San Sabba, settles near the seaport of Trieste in the northeastern part of Italy. The tranquil vista of the sea, woken up by the solemn crash of the waves against the port walls and rocks, appears unfazed in its hearth. Such a panorama gloats enough attention to be drawn to it. What unnerves the visitors’ original plan to watch the sunset by the sea turns to the history-infused rice mill that never seems to rest.

The vintage rice mill jutted out with its old machinery in 1898, echoing screechy cranks that signaled the production. Cutting out the outer husks of the raw grains piloted the process before undergoing manual labor to reap the rice grains. The facility operated at a busy pace to meet the quota of selling its rice to the market. In 1913, its buildings completed their fixtures and structure, attesting to the prosperous source of income in the town. Yet the thought-of rice mill that planned to continue its glory veered off to a dark path when history speaks about a war period that forced the Risiera of San Sabba to nod to carnage, blood, and human ashes.

Circling back to September 1943, the fascist Republic of Salo declared their presence and establishment in the city of Trieste. Its grip meant that the zone’s control, inclusive of Fiume, Udine, Istria, and Friuli, fell in the hands of the Nazis. To revolt against the impending stronghold of the new regime, a resistance war ensued that ticked off the Nazis to cultivate a concentration and extermination camp. Snaking through potential locations where the gruesome shack would be built, the Nazis painted the Risiera di San Sabba as an optimal host to cater their blood-infested endeavors.

Gone were the metal clanks of the engines that once clothed the brick-based mill. The ringings were gradually replaced with chill-inducing cries and howls that came out of the mouth of the tortured anti-fascists, civilians, Italians, Slovenes, Croats, and Jews. The nights starting in 1944 no longer rested in peace, but shaken in fear, uncertainty, and deaths.

Most narratives lay down the assortment of executions carried out by the police forces working for the regime. Hanging, firing squad, gas emissions, and bludgeoning formed a sphere of choices that executioners choose from when they thought of how to end someone’s life. In other stories, the killings took place at night with the dogs set free and the music blaring from cracked speakers to drown the cries of suffering elicited from the prisoners.

The dead bodies piled up until the mountain of lost lives could no longer be accommodated by the six-storey Risiera di San Sabba. With hundreds of thousands of deaths accumulated, the Nazis opened themselves up to ideas on how to eradicate the bodies that took up the space. To sap the towering deaths, they dedicated a crematorium in the rice mill to oven the bodies to ashes.

Contradicting stories have erupted in the original position of the crematorium. While some hearsays are convinced that there used to have a grill below the chimney stack, a waft of smoke symbolized a burning body, other stories land on the craftsmanship of Erwin Lambert, a member of the German Einsatzkommando Reinhardt — EKR or the “Action Group” — who had had curated several crematoriums for the Nazi extermination and concentration camps in Poland. If the facts point at his craft, then there was a designated crematorium oven that sat outside one building on the rice mill.

The suffering of the prisoners ended after the Second World War. The Nazis evacuated the rice mill, but not without the wrath of the Court of Assizes that called out the inhumane aggressions of those who were involved in the criminalities. Although the premise dreamed of bringing justice to the macabre deaths, the officers and police forces in charge got out of the law’s leash and detracted from the hit of legal repercussions.

Among the accused, two high-ranking officers were crowned to have incurred the most deaths drawn from their continuous mass murder. The court trial witnessed August Dietrich Allers die amidst the legal process while Josef Oberhauser received a life sentence when the case ended on April 29, 1976. The German authorities refused to hand over Oberhauser to the Italian authorities as secured by the bilateral agreement that the two countries had signed in 1942.

The Second World War climaxed and left finite destruction that embossed itself on history. Its finale heralded the start of a hushed journey that Risiera di San Sabba would embark on. In 1965, the Republic President of Italy signed a decree that declared the rice mill as a national monument.  A revamp initiative was carried out in 1975 under the supervision of the Italian Architect Romano Boico. Since then, Risiera di San Sabba has blossomed into a hazy orange architecture engrossed in culture and history that visitors can experience today.

Decades after the unholy deaths, Risiera di San Sabba transformed as a multimedia museum in 2016. Visitors can immerse themselves in the perturbing history it had garnered for years. Artefacts that range from photos, rescued documents and objects handed over by former deportees of the camp, and videos mask over the gallery. Not only did it rise as a nationwide pillar, but birthed a new name to strangle a slice of the past away from its present feature: The Civic Museum of the Risiera di San Sabba.

The stench of deaths, blood, and outcries has long been sanctified through the initiative to nurture its remnants and invite the public to share its newfound gleam. Warm light bulbs hang from the ceiling of the re-polished wood columns to light up the rooms. No traces of filth, aside from litter and dust, reside in the somber museum. From the outside, the architecture parades its fading orange tint and fragile bricks. Once visitors step in, they will be enveloped in a bottled-up energy that Risiera di San Sabba still masks.