Amo DeBernardis came from an immigrant Italian family and, despite adversity, went on to found Portland Community College. 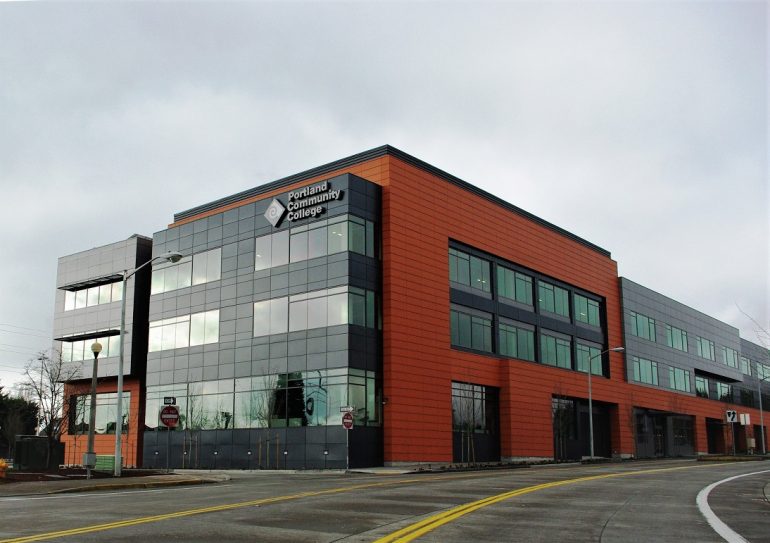 McMenamins Kennedy School in NE Portland is home to local beers, music and mementos of the school’s colorful history. The building was renovated by the chain in the ‘90s and now serves as a lively neighborhood hub; however, if you take a walk through its hallways, you will be transported back to the early 1900s — childhood shenanigans and all. The building is adorned with old chalkboards and murals of early Portland. Interestingly, Italian influence is also sprinkled throughout the school, reflecting the multinational population of NE Portland at the time. Take the reproduction of Luca della Robbia’s bas relief at the entrance, a lovely interpretation of adolescence and appropriate for a once elementary school. In addition, an Italian alum can be found smirking on a motorbike from his place on the wall. This student is Amo DeBernardis, whose air of rebellion is evident from the photo, and who would later go on to become the founding president of Portland Community College — chutzpah intact.

DeBernardis’s parents immigrated from Piedmont in northwestern Italy and arrived at Ellis Island with hopes of pursuing and creating a better life for themselves. They moved to Portland, Oregon where they had connections in the Italian community. His father owned and operated a wicker store, a craft he learned in the ‘old country’, while his mother stayed home to rear the four children. The family spoke only Italian in the household, which proved to be an obstacle when DeBernardis and his sisters entered school at Kennedy. Amo spent much of his time in the principal’s office because of his antics and role as class clown. When it came time for graduation, his teachers recommended he follow a vocational track, as academics did not seem to be his strong suit. Ever the contrarian, Amo decided to pursue academics and ultimately went on to receive his doctorate from the University of Oregon.

DeBernardis, or ‘Dr. De’ as he was affectionately known by colleagues and students, taught woodworking at a vocational school, but quickly moved into administration. He was asked to start an adult education program and was given a vacant elementary school (ironically called ‘Failing School’) to hold classes. As the program garnered higher and higher demand, it ultimately broke away from the Portland Public School system to become its own community college. This, however, did not come without its hurdles. De and his partners had to not only find funding for the college, but physical land for the buildings. The founders took it upon themselves to personally approach city organizations and taxpayers, emphasizing the importance of this endeavor.

DeBernardis viewed education not as a privilege, but as a fundamental right. He and his partners observed underserved populations in their community — people with financial, locational or learning restrictions — in need of flexibility and accessibility. Given De’s heritage and upbringing, he ardently advocated for honest work and independence for young people. He hoped to “break traditional barriers to learning” and believed in the “dignity of choice and respect for the individual.” PCC would offer both vocational and academic tracks, which would tap into the unique potential of each and every student that would walk through its doors in the years to come. After many years of hard work and grit, Portland Community College’s official inception took place in 1961. DeBernardis went on to serve as college president for 18 years and received the Watzek Award as a pioneer in the field of education.

Today, Portland Community College is the largest post-secondary institute of higher education in the state of Oregon. Its enrollment continues to grow, serving more than 65,000 students per year. PCC is a living, thriving representation of the Portland community and continues to engage its neighbors in a variety of initiatives. For example, one of the college’s most recent proposals is to include low income housing options on campus. This, in conjunction with its contributions to provide digital devices for students that otherwise would not have access during these times, are ways in which PCC remains equitable and relevant — De’s ‘open door policy’, if you will. Now, more than ever before, institutions of continuing and higher education are called upon to adapt to the current climate.

DeBernardis understood the need for a college to continue growing and adapting in order to address the ever complicated needs of its local community. PCC was created with the intent of always putting the student first, a principal De himself fought for passionately. His advocacy for the underserved may have been rooted in his modest upbringing, coming from a family of Italian immigrants with seemingly limited opportunities. However, his fortitude and grit in the face of adversity, reminiscent of many first generation Americans, would see him become one of the most influential and visionary educational leaders in Oregon. In the words of De himself, “nobody said it would be easy — but what choice do we have?”