Now, it seems, being buried in the ground is coming to be something of a privilege. 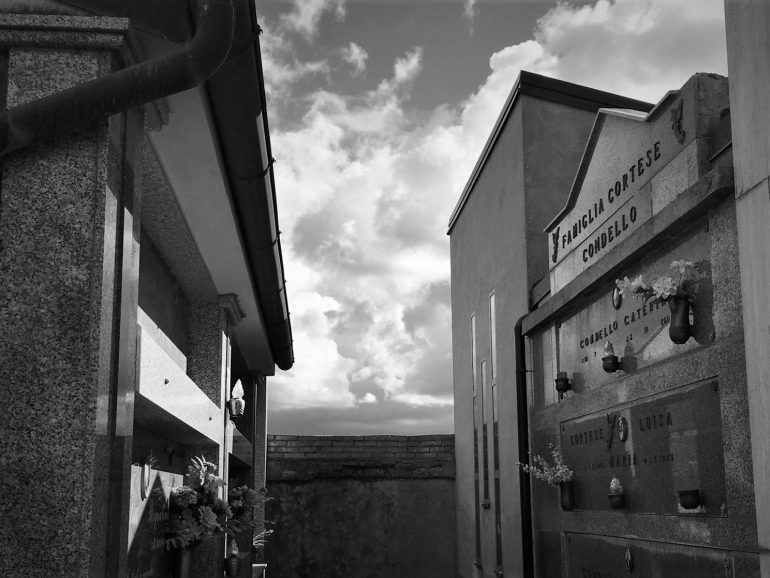 A cemetery in Capistrano, Calabria, Italy. Photo by Riccardo Venturi.

We can say that Italian cemeteries are of one of two kinds, town or country, or maybe a combination of the two, who knows. Every classificatory scheme runs the risk of distorting the truth as much as it promises to clarify it.

I thought of this as I was walking to the market this morning, and passed the cemetery of the small mountain village in which I now live, Ruffrè-Mendola. It is a Saturday morning and there was one woman in the cemetery, and she was doing some kind of work around what I assumed was a plot or group of headstones that belonged to her family. The cemetery is quite small, fittingly given the size of the village, but the family grave sites are quite large and can be quite elaborate, holding the remains of at least a few family members, often spouses, and often of people who lived long ago, but not always, so nonni and bisnonni, it seems, those born in the late 19th or early 20th century, if not before. Cemeteries of this type are ubiquitous in Italy, as common as war memorials, and of course similar in nature.

But about this work the woman was doing and the cemetery types I outlined earlier, town and country. If I had to categorize this graveyard, I would say it was of the country type, and the woman I saw working in it, tending the gravesite of her forebears, was doing something that very much resembled gardening, or was gardening.

A plot in such a cemetery typically consists of one single large stone monument, usually granite or marble, or perhaps a collection of two or even three stones, symmetrically arranged, arrayed with decorations and religious symbols, almost always Catholic, and inscribed with the names of the deceased whose remains they contain, protect and memorialize. Surrounding the stone pieces is ground, earth, soil, in which are planted any number of species of annuals and perennials, plants that need regular tending — clipping, watering, weeding, replacing. Hence the woman who seemed to be doing some kind of work with a hoe, wearing gloves and accompanied by a wheelbarrow, was not entirely dissimilar at all from the people in the surrounding houses who were out on a fair Saturday morning of early summer in the mountains, cutting grass or planting beans in the plots that surround their houses.

‘Plot’ is an interesting word, and for sure I thought it derived from the Latin platea, which derives from the Greek plateia, ‘flat and open space’, as are the English and French, place, the Spanish plaza, the German platz, and of course the Italian piazza, but etymologists are not so sure about it. One clue is the difference in spelling, namely the ‘o’ in place of the ‘a’, so ‘plate’, and ‘platypus’ (because of the shape of its bill) and other similar words containing ‘plat’ derive from it, but ‘plot’ seems to be unrelated, being perhaps a back formation of the Old French complot or compeloter, which refers to the other common meaning of ‘plot’, a plan or a storyline, maybe even a conspiracy. It even appears in some documents as plat, but the experts seem to think this is just a variant spelling of ‘plot’, and the trail goes cold after Middle English times.

Try using an online translation engine to see what the Italian equivalents are; you will be surprised, perhaps, as I was, to see that nothing in Italian resembles it, with the main definition being that of a storyline or conspiracy, not that of a small piece of land. ‘Cemetery’, cimitero in Italian, comes to us from the Greek koiman, which means, quite touchingly and even a bit humorously, ‘to put to sleep’. Koimētērion was how the ancient Greeks said ‘dormitory’. Perhaps accidentally, although fittingly, one puts one’s dog ‘to sleep’, as the euphemism goes, and a member of your local mafia might induce a nemesis to take a ‘dirt nap’, showing that the perception of dying as a kind of sleeping is quite common across multiple social and cultural spheres.

Nevertheless, in English, one can have both a garden plot and a burial plot, and although both involve flowers, and bear no connotations of sleep (although intriguingly one can have a bed of flowers in one’s garden plot), one can work in the former, but not really in the latter. One can bring a fresh bouquet of flowers, and give the vase a fresh change of water, but gardening as such does not seem to be as common in the anglophone world of death and dying and cemeteries. In fact, the juxtaposition of verdant energy and corporal stillness seems quite jarring: “All I want is the quietness of stones and wool,” wrote Pablo Neruda, his poetic persona wanting to escape from the busy world of making and doing. Perhaps this is why there is always something so sickly and off-putting about funeral flowers.

Now, things are quite different in the town model. Here, you are unlikely to encounter a patch of dirt anywhere, let alone a plant: everything is cold urban hardscape, concrete and brick. The family plots, we can still use that word, although now we must conjure building sites — ‘lots’ instead of planted garden ‘plots’ — are given to mausoleums, whose architecture is no less splendid for being diminutive in size. Even the aisles between the edifices, because we are really talking high-rise proportions in terms of aisle width to structure height, bear street names, because that is very much what they resemble: Via Pace, for example.

These urban cemeteries seem to be particularly popular in Sicily, which has always been a very urban place, with farmers historically preferring to live grouped together in towns, from which they would commute to their fields. The lone farmhouse surrounded by acres of farmland, Little House on the Prairie in the American imaginary, is something of a rarity in Sicily, unlike as in other parts of Italy, and even parts of the United States. It makes sense that if you grew up and lived your whole life in an urban environment, that you would want to be buried in one also. Kudos to the planners, urban or ecclesiastical, who decided to break with the garden motif that so many cemeteries seem to embrace.

Now, it seems, being buried in the ground is coming to be something of a privilege. If a cemetery does offer burial plots for sale, that is if it is not already full, they are bound to be quite expensive, as is all urban real estate these days. The market reacts to scarcity the same way in the land of the dead as in the land of the living.