The Materiality Of Migration

It might seem that the ocean and the desert present radically different challenges for migrants. However, they are remarkably similar, particularly in the effects they have on those seeking to cross them. 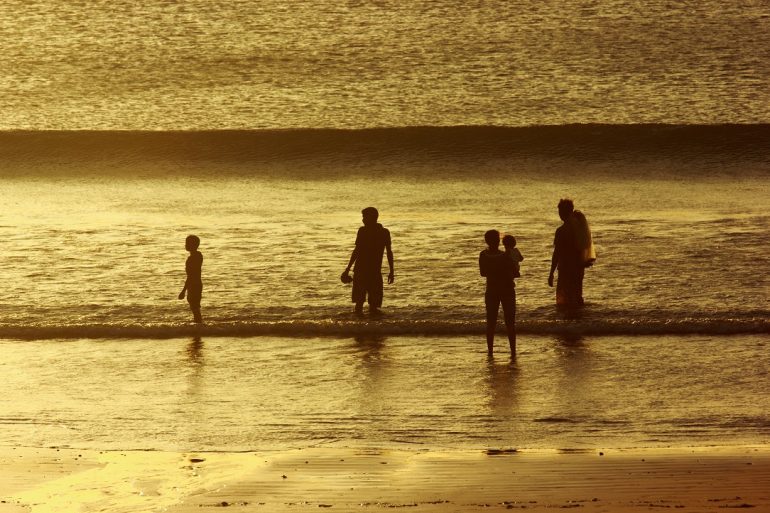 It might seem that the ocean and the desert present radically different challenges for migrants. However, they are remarkably similar, particularly in the effects they have on those seeking to cross them.

It might seem that the ocean and the desert present radically different challenges for people seeking to cross them given their radically different materialities: all liquid in the first case, all earth in the second. Think of the Mediterranean Sea as an example of the first type, and the Sonoran Desert as an example of the second. In fact, they are remarkably similar despite their dissimilarity, particularly in the effects they have on persons seeking to cross them. Let’s take a look at a few of those and how they are implicated in the problem of forced and irregular migration.

For one, both landscapes present difficult surfaces to cross. In the case of oceans, on all but the shortest routes, some kind of floating technology is needed: a ship, a boat, a raft, an inner tube; something is needed for routes over a distance that is swimmable, say a few kilometers at most under ideal conditions. Humans may have descended from the seas, but that was a long time ago, and our bodies are no longer well adapted to moving on and through them. In the case of deserts, we have the same problem but for different reasons. Sand is difficult to walk through because it does not provide a stable surface to support a propelling footfall. One could conceive water as a radical version of this dynamic, and the phenomenon of quicksand and perhaps the marsh qualify as hybridized environments that pose similar problems, but it is really only the desert where this quality causes significant and frequent difficulty. Most deserts are not sandy, however, so the challenges to human mobility lie elsewhere.

This brings us to another difficulty that is common to both ocean and desert: predators. Where oceans have sharks, jellyfish, seaweed and other entities that can kill, injure or entrap people who are immersed in them, deserts also host a number of species of both plants and animals that threaten the welfare of unprotected and ill equipped migrants; cactus, scorpions and bobcats can halt or impede a migrant’s progress.

These vegetal and animal interventions present minor threats, however, in comparison to the sheer hostility that extremely wet or extremely dry environments pose for human beings; the real problems in both instantiations are exposure and dehydration. Vegetation that can provide shade and shelter to a migrant is sparse in desert environments and non existent on the ocean. The same is true of fresh, drinkable water; in fact, it is heat stroke and dehydration that cause the greatest hardship for migrants, hazards that frequently lead to death.

Compounding these problems, and in fact often the initial condition of migrant suffering and mortality, is the problem of getting lost, since neither the ocean nor the desert, being truly wild environments with no or virtually no infrastructure, provide little direction to persons trying to cross them. It is worth contemplating how essential certain aspects of cultural landscapes have been to the rise and continuance of human habitation, particularly the idea and phenomenon of the road and its related signage. Very few migrants are able to read the directions that natural landscapes provide, and even then knowledgeable and experienced guides are often confused or foiled by the other challenges that environments that are so hostile to human habitation pose.

The harshness of oceans and deserts is well known to authorities who seek to impede the flow of migrants; it is also well known to those who seek to aid and exploit them, such as those boat pilots and the so called ‘coyotes’ who carry or lead groups of migrants across oceans and deserts for a fee, and often robbing them or otherwise abusing them — sexually or as forced labor — in addition to or instead of providing a way across inhospitable terrain and state borders. Authorities who aim to deter irregular migrant crossings count on the hazardous natures of oceans and deserts as a kind of ally in their battle against illegal crossings. They can cut off an established path of migration, one that follows existing infrastructure such as a road, for example, or a less formal path that is used by smugglers, knowing that outside of these routes and entryways lies an expanse of ocean or desert that is even more effective at challenging or stopping migrant flows than is any kind of human intervention. It is worth considering that even state authorities have difficulties operating in such environments, despite their always superior technology: large ships instead of small boats, or all terrain vehicles and sophisticated detection equipment instead of a truck or even a simple pair of sandals.

Such a conception of the problem posits oceans and deserts as a kind of political agent, inanimate as it might be. And this conception of political agency calls for some kind of theorization that is adequate to hold both animate and inanimate, both human and nonhuman, forms of agency in relation. What comes to mind immediately for me is Michel Serres’ idea of the natural contract, one that reestablishes a kind of cautious respect for the nonhuman world on the part of human beings, who with the onset of industrialization, and even with the development of agriculture, have lost intimate contact with it.

So one wonders how different these migrant crossings would be if they occurred in some other context. Travel through a forest or jungle is difficult, with the threats that just insects present, for example, but they at least provide a mixture of soil, water and vegetation that is conducive to human habitation and mobility. Although the discourse on migration often presents the process as the crossing of a state border in a discrete motion, a single step at its most reductive scale, the real problem, as is also discussed but not to a sufficiently developed degree, is that which is presented by the landscapes of these crossings themselves, in particular the strikingly similar problems that have their origins in their radically different materialities, aqueous ocean and desiccated desert.

Human agency occurs within the context of natural agency, and natural agency is based in its material qualities. Given the radically shifting relation between human beings and the nonhuman world we inhabit, which is usefully conceived in terms of the Anthropocene, a conception of our planet as being strongly humanized, it is long past time that we renewed our respect for the often unknowable and certainly uncontrollable power of the nonhuman entities of world, animate and inanimate alike. In fact, it might be a good idea to seriously engage with the ideas present in animist and now neoanimist thought, ideas that are consistent with Serres’ idea of the natural contract.