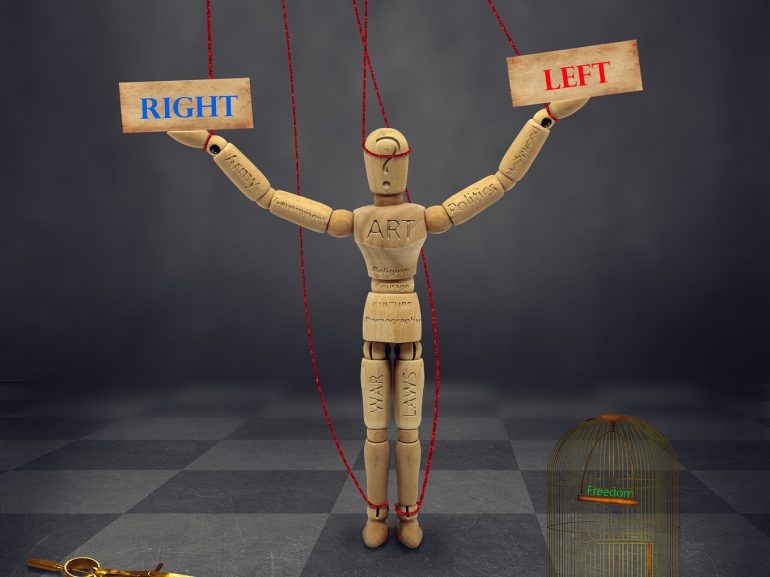 How the League’s new Rome offices sparked a discussion about the legacy of Italy’s left and right.

Via delle Botteghe Oscure 4 is a street in the center of Rome, marking a watershed between the quaint districts of Pigna and Sant’Angelo. It is also traditionally associated with the historical headquarter of the Italian Communist Party (PCI), perfectly located between the Parliament and Palazzo Chigi, the official residence of the Italian Prime Minister.

Many people consider it a symbolic place, as it is not that distant from the Christian Democrats’ former offices and the famous street where the body of statesman Aldo Moro — murdered by the Red Brigades in 1978 — has been found. Nevertheless, during the past few weeks, this street unexpectedly entered again the political trends, fuelling the debate between Italian left-wing and right-wing parties.

Salvini and the new left

Everything started when League party leader Matteo Salvini announced that his political group would open its new Rome offices in Via delle Botteghe Oscure 54, more precisely in the building opposite to the former PCI headquarters.

As a matter of fact, the move was justified by financial issues and more practical reasons, including a lower renting price and the party’s social media team already being based there. Given the circumstances, nothing seemed to be out of place.

However, troubles arose when Salvini took the chance to say that the League is the heir of former PCI leader Enrico Berlinguer and of his values. In addition to its weighty political legacy, the PCI advocated for the multilateral cooperation between nations and the rights of working classes, so the comparison between a right-wing party and a leftist one soon appeared improper and inflamed the talks.

Salvini was heavily criticized by other political actors, mostly from the Democratic Party (PD), who did not accept the parallelism between the League and Berlinguer’s left, whose office lasted from 1972 to 1984, and marked the historic moment when the PCI came close to become the first party in Italy. In addition to that, under his leadership, the left reflected embodied principles antithetical to those promoted by the right-wing parties of the time.

While a number of politicians from both sides distanced themselves from Salvini’s claim, once again, a statement managed to spark a political discussion centered on the legacy and the evolution of both ideologies.

Traditionally speaking, left-wing and right-wing parties occupy opposite seats in the government. In more general terms, the former group promotes a more egalitarian society obtained by changing the status quo, whereas the other side of the political spectrum is more conservative and pushes for measures aimed at the economic growth.

In Italy, following World War II, the two major political groups were the Christian Democrats and the Communist party — respectively located on the center-right and left of the political spectrum. During those years, the distinctions between the two blocks, their values, and their supporters were easily identifiable.

The identification with one group or the other mostly depended on the status of the individual within society. For example, being a worker in a factory meant being almost certainly associated with the local section of the Communist party. On the other hand, a business owner would have most likely chosen to become affiliated with the Christian Democrats, mainly to contain the so-called ‘red danger’.

Left and Right divisions in the political arena symbolized the respective social strata. In fact, the lines between social classes were easily recognizable, facilitating the development of political affiliations.

The two conflictual ideologies remained central in the political debate until the 1990s. However, the stereotyped social cleavages slowly faded because of the fast globalization processes and the rise of new forms of political communication.

In addition, the growing role of the European Union heavily modified the conceptualizations of national politics and governance. In this sense, political stances started to include defined positions on European leadership as well as on the other countries’ national policies. This enhanced supranational dimension became more and more prominent even within national borders, shifting the focus towards an us vs them debate.

The progressive improvement of the population’s socio-economic conditions consolidated and reinforced a new social order, the bourgeoisie. Yet the political offer was not diversified enough to satisfy the needs and demands of the newly-established middle class, leading to the weakening of the traditional distinguo.

The internal turmoils of the major Italian political parties during the late 1980s and early 1990s, heavily affected the people’s voting behavior. With respect to the Communists, Berlinguer’s political ability marked the best years for the party.

However, after his death in 1984 and then following the crisis of the Soviet bloc, the PCI lived a downward trend that resulted in its irreversible fragmentation and creation of new political factions. The Christian Democrats and right-wing parties, instead, saw the rise of media mogul Silvio Berlusconi and a new liberal approach to politics in a Reaganian mold. The following personalization of the political debate, with the appearance of a strong leader and a new program, cleverly conquered the disoriented public.

The evolution of the national political ideologies was caused by both internal and external factors, but there is less clarity on what they represent today. The political groups at the opposite poles, indeed, don’t structurally impact the national debate, as it seems that it’s now more important to bring forward more specific perspectives. Both the claim and the ability to give voice to an entire social class is already history.

Actually, the boundaries between left and right are much more fluid than in the past. The motivations behind the success of certain ideologies are already gone and new rationales are guiding the modern Italian parties. They don’t like being labelled leftist or rightist, but they prefer to support broader perspectives which are eventually shareable across different social groups.

As a matter of fact, many modern parties position themselves in the center-right and centre-left areas. The dichotomy between left and right has been surpassed and substituted by other forms of political confrontation, with thematic, local and international dimensions. The governing parties are very personalized — see Salvini’s League — or are not easy to place in a determined political family, like the Five Star Movement.

During the last few years, this continuous reshuffle of public actors and party alliances did not favor the development of strong sense of belonging. Despite that, the distance between left and right is still visible, and the criticism Salvini received after his statement kinda proves it.

Even without a perfect identification with the flags or colors representing the major parties of the past century, even the Italian political class still perceives a certain degree of attachment to their respective legacies. In different forms, between changes in values and programmatic evolutions, left and right takes another form and their clash is still genuine, as in an eternal political waltz.