Once the guests step into Alvar Aalto's church to witness the humble lodging, the Scandinavian-clad modernism clings onto its minimalist demeanor and our soul. 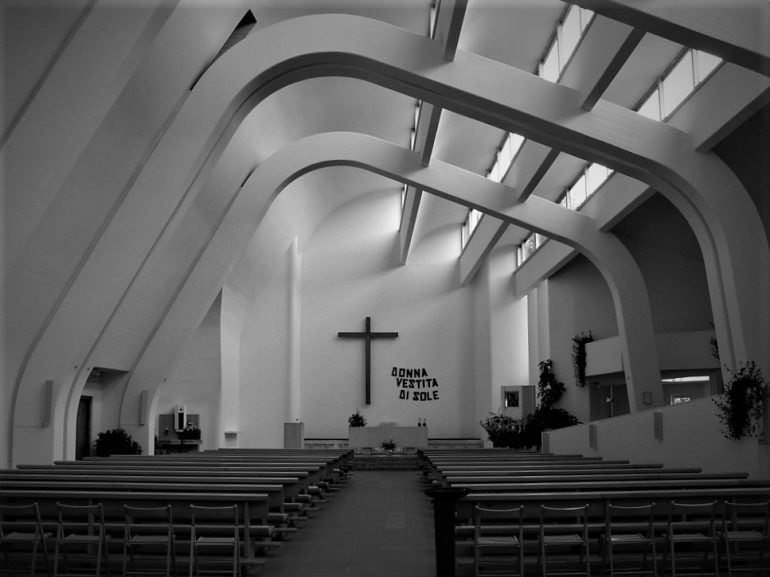 Once the guests step into Alvar Aalto’s church to witness the humble lodging, the Scandinavian-clad modernism clings onto its minimalist demeanor and our soul

The skin of the verdant hills brushes against the sole of the dirtied shoes. The soft land thrums in every step, pulsing the earth’s heartbeat. Eyes up and squinted, the horizon beams with three cresting mountains forming a triangular sphere and dressed in their dark forest-colored clothes. Their backdrop blossoms with the light blue hue of the sky and layers of trees in trepidation, commanding the full attention of the lodgers. At the center of nature’s grand design sprouts a deep sense of grounding via an architecture. This is Alvar Aalto’s church calling out.

The Riola di Vergato church exposes itself unabashedly in the quaint village of the same name, hailing at a serene spot near the south of Bologna and along the road to Pistoia. It is the brainchild of the Finnish architect Alvar Aalto, one of the masters of the modernist movement in architecture. The once clandestine finesse of Aalto ties knot with the modern world as its rediscovery leads to a sixty-minute documentary of Roberto Ronchi and Mara Corradi about the parish. Before the cameras took footages of its grandeur, Riola di Vergato erects history that jumps back to 1965 when Cardinal Giacomo Lercaro heralded a commission and delegated the mission in building new churches around Bologna to bear the philosophy of renovation and inclusion in the suburbs. The cardinal tapped the Finnish architect to morph the idea into a concrete and modest church, the start of Aalto’s magnificent artistry in Italy.

The architect flew to Riola for the first time in 1966 to attune himself and his layout to the land where the church would be constructed. As he wandered around the empty shell of the hill, his eyes caught the pattern of the three mountains on the landscape — namely Monte Vigese, Montovolo, and Monte di Vigo — that encapsulated the space, goading their exquisite beauty. Not far from where he was standing flowed the River Reno, its quiet hum and continuous rush unshackled the creativity and faith-based spirit of Aalto, fueling a blueprint that touched on the community’s culture.

An old picture in one of Aalto’s archives exposes a gathering in an abode. A line of dishes cluster on the white-clothed table with forks, spoons, and wine glasses decorating the empty spaces. Wine bottles nestle in the middle, beside the tall white candles. Before the spectacle, a crowd of suit- and dress-wearing visitors chatter in joy as their eyes crinkle in jubilation. At the crown of the table, a man eyes three sheets of paper with the drafts of the church’s look. Pencil ink outlined the modernist take on the church which was deemed innovative during the period.

The construction was launched, but in 1968, Cardinal Giacomo resigned for reasons that are still bound to be unraveled. His parting left a gaping crack in the continuation of the architecture, placing the project in an immediate hiatus. The half-finished church bared its skeleton to the public and shared the fear of the community that it would not reach its expansive shape and form. The worries fell apart when entrepreneur Mario Tamburini locked his dedication towards the project and picked up the conclusion of Riola di Vergato from his own pockets.

His efforts brought forward the culmination of the architecture and celebrated the first ceremonial gathering in August 1977. Elissa Aalto, Alvar’s wife, watched the spiritual mass come alive before her eyes, soaking in the poetic work of art his husband had curated. She stood there in the basking glory of the church to represent her late spouse who had passed away the year before. A year after the christening mass, Riola di Vergato was completed. The years that followed marked the genesis of domestic and international recognition to the only masterpiece of the Finnish architect in Italy.

Renovations have been specked since then to retain the original facet of the church that wounds its visitors in a venerated belief. The exterior dangles with the wave-like image of the sea that faces the east (if one stands before the front door), housing white-and-beige hued stones as part of its framework. The craggy height of the pillars speaks to an intentional approach to mount the glass windows that capture the sunlight from the outside.

Once the guests step into the church to witness the humble lodging, the Scandinavian-clad modernism clings onto the minimalist demeanor of the church. An array of entrance doors displays transparent glasses and white ridges. Push the doors open and two colors pop out at a first glance: white and brown.

The colossal white columns first straighten their spine before cowering midway to form a half-hexagon look. Beyond and above the pillars, squared windows let the light from the outside infiltrate the quaint space while exuding the aura of zen. The few rows of honeyed-doused church pews stand out against the red-marred floor as they fall in line, slightly distant from the altar. The shrine’s design is simple, intentionally forgetting any ornaments and sticking with the giant, brown crucifix pasted on the wall to bless the visitors.

Outside the sanctified place, immense squared pedestals gorge themselves of gray color, almost touching each other with their line-up by height. On top of them, a thin holy cross gloats as it stands tall against the kiss of the cool wind and glaring sun. At first, it would seem as if the design meant as an additive, but the construction is the home to the church’s bell. What’s left is to sew a thread to the visionary sights and let the formidable mastery of Aalto flaunt its sublimity.

It is a spiritual venture to saunter inside an architecture as meek as Alvar Aalto’s Riola di Vergato. Somehow, the church asks for the guests to sit down on the long wooden benches, fold up their body and seek for guidance, or stretch their neck upward to revel the moment. The stillness in the room forges reconciliation with self and the sanctuary, dashing a tinge of meditation for one’s well-being. In the next breath, the emotions unfurl unconditionally. It’s safe to know then that there’s more than faith to surrender.