Thoughts And Prayers In The Time Of Coronavirus

Italians, religion and Covid-19: a relationship torn between prayers and action 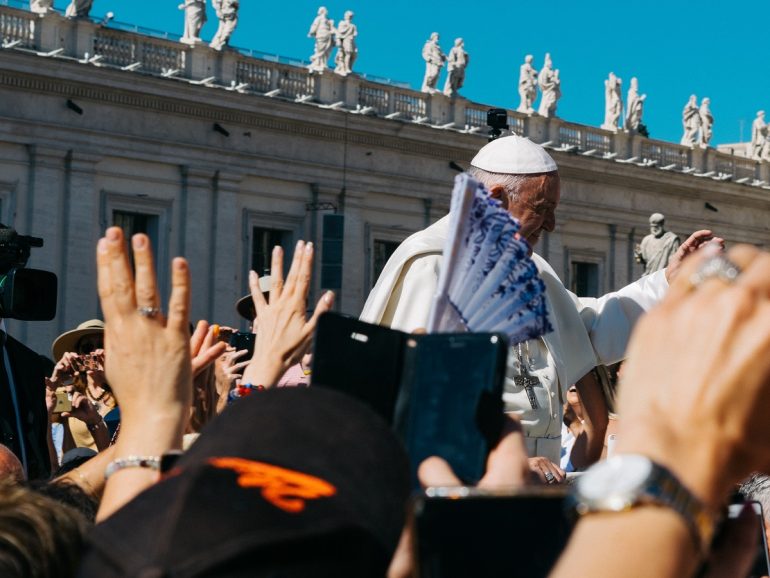 Italians, religion and Covid-19: a relationship torn between prayers and action

The global Covid-19 pandemic has led to a massive number of deaths in the shortest time ever recorded. The images of the Italian military in Brescia — a town in the heavily affected Lombardy region — carrying caskets, still haunts our minds. And with such an impact on how we feel about our future, religion inserts in many ways.

The majority of the Italian population follow Christianity and rely on religion to mourn and find consolation. Although Article 7 of the Italian Constitution separates State and religion, in practice this is not always the case. And while religion is important to many believers, everybody wants answers and action, not thoughts or prayers. Especially when many Italians keep roaming the streets of their cities disregarding social distancing.

Indeed, religion can help people find reassurance when there is no one around them. Surveys show that people pray now more than ever, although most do not follow any religious mass online or other virtual rituals. Quite interestingly, a similar percentage of people believe that we are being punished by God for the sins committed. This completes the picture of what I’m about to explain.

Media is the religion

Matteo Salvini, leader of the League party, appeared recently on ‘Live – Non è la D’Urso’, a program aired by Mediaset, and prayed on live TV together with the host. This appearance did not pass unnoticed, as politicans usually refrain from making such acts, in respect of different beliefs.

For the prayer, Salvini was heavily (and rightly) criticized for his little sensibility in difficult times, as the instrumental scene was declared out of place. Aldo Grasso, a journalist from the national newspaper Il Corriere della Sera, described it perfectly in an opinion piece. Don Antonio Rizzolo, Director of the religious newspaper Famiglia Cristiana, stated that “more than a prayer, it felt more like a blatant research for publicity.”

Salvini said for his part that he would happily take away “10 seconds” from his time to dedicate a prayer to the victims of Covid-19. As soon as the prayer terminated, the web was inundated with angry tweets of unhappy citizens criticizing the two for not taking the concern seriously. There is a time and place for everything, and in this case it’s not a television studio.

Exactly because religion is a personal matter, especially in a non-religious country (on paper, at least), political representatives must be inclusive and consider diverse sentiments. Not only atheists, agnostics and believers of other faiths. Many Italians, indeed, are Christians who practice their religion seriously, in places of worship or intimate settings, rather than with a politician or on TV. Not to mention the people who actually suffered a loss due to Covid-19.

Some citizens in Italy were upset when Pope Francis decided that also the Vatican would practice religion behind closed doors, although social distancing is key to combat the coronavirus. Many members of Church were contrary to this decision arguing that faith has led Italians through past epidemics, some even saying that “Italians without communion cannot live.”

Pope Francis, however, established an emergency fund for those most in need. He made an initial contribution of 750,000 dollars in aid of those people and communities that are being the most impacted. Furthermore, the Pope, even during Easter Break, expressed his desire for a future with “minimum global wage and no discrimination.” These words have not been equally shared by those politicians who instead pray on TV and insist that dedicating a few words for the deceased is “taking a minute or two out of my own time.”

Many priests, instead, have streamed mass online, as the Pope appeared on television and even spent time with French President Macron.

The Jewish community in Italy is finding its way to unite by publishing online the names of those who past away. Young volunteers buy groceries for the elderly and the weaker, and others are volunteering to go to pharmacies and purchase masks and hand sanitizers. The president of the Jewish Community in Milan declared that they requested materials even to the European Jewish Congress and the Jewish Agency. Other Jewish organizations around Italy such as the UCEI, an umbrella organization representing all the 21 Italian Jewish communities, are offering psychological support in these difficult times.

The Muslim community has been struggling due to the small number of burial spots. In Italy there are about half a million Muslims with only 58 Islamic cemeteries and, before the coronavirus, many would prefer to opt for repatriation. This was until mid-March, when cargo flights transporting bodies were blocked and returned to Italy. The reason why burial is so essential for Muslims is that cremation is prohibited. Moreover, religious activities were interrupted extremely fast at the end of February, as decided by the Union of Islamic Communities in Italy (UCOII).

When we talk about religion, we should always remember the following words by the late astrophysicist Margherita Hack: “It is not necessary to be a believer to have a moral ground, because if we cannot distinguish right from wrong, that is absence of sensibility, not religion.”

When it comes to Covid-19 we have been able to observe the moral grounds of citizens, political leaders, and possibly the true nature of many people.

Politicians are fighting over funding purposes, see the MES(sy) debate between the Italian Prime Minister, Giuseppe Conte and the opposition leaders Matteo Salvini and Giorgia Meloni, while action is what we need the most. Thoughts and prayers, either on TV or in person, are nothing if they are not accompanied by actions.

The streets of Italy have been photographed filled with people several times, as social distancing is not being followed. I would not be surprised if many of these people are also those who complain about being blocked from entering a church or other places of worship.