Shakespeare wrote in The Merchant of Venice that “the world is a stage where every man must play a part,” and Carnival has always been the best moment to go on stage. Might there be a better stage than Italy for it? 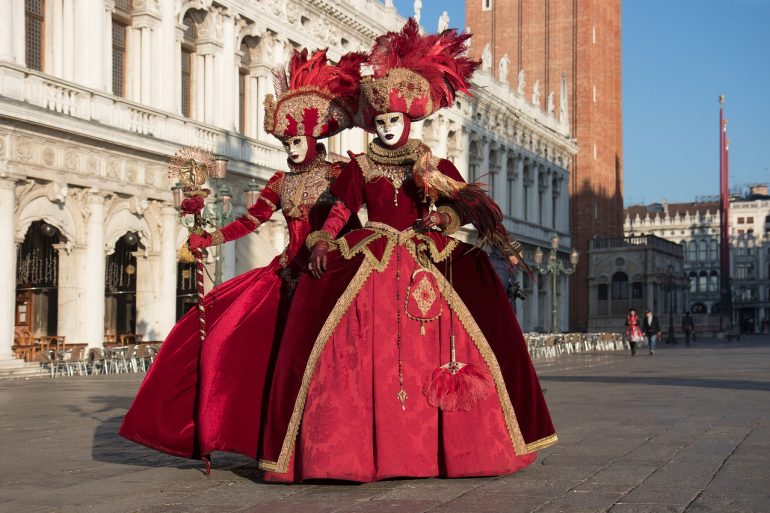 “A mask tells us more than a face” — Oscar Wilde

The word Carnival comes from Latin, meaning “meat,” which is removed from the banquet which took place on Shrove Tuesday (Mardi Gras), the last day before the abstinence period of Lent, beginning with Ash Wednesday. But Carnival has ancient origins, referring to the Greek Dionysian or the Roman Saturnalia festivals. It is a ritual that has characterized the Indo-European and Mesopotamian people, influencing the Christian religion and the Western European culture, from the Middle Ages to present day. Carnival is closely linked to the cosmos, to its destruction and its recreation, in a magical cycle in which the social order is overturned. And then spirits and masks appear, filling the streets and circulating freely between heaven, earth and the underworld. Shakespeare himself wrote in The Merchant of Venice that “the world is a stage where every man must play a part,” and Carnival has been — through the centuries — the best moment to go on stage. Might there be a better stage than Italy for it? You already know the answer. It’s no.

The Carnival of Venice is among the oldest and most popular Carnivals around the world. Its origin dates all the way back to 1094, when the Doge (the chief of the then Republic of Venice) Vitale Falier mentioned the word Carnival in a document. Since 1296, the Carnival of Venice has been officially declared a public holiday by the Senate, with the aim of granting Venetian citizens a period dedicated to pure fun, considering the strict rules about the morality and public policy under the Republic.

The Carnival represented — especially for the humblest classes — an opportunity to have fun without worrying about social conditions and roles. Indeed, thanks to the anonymity ensured by the masks, the people could dance and celebrate the Carnival without limits, even being able to mock and make jokes about the aristocracy publicly, which was the leading authority in the city. The evocative stage of the city of Venice — that inspired artists all over the world — made the Carnival’s atmosphere magical and attracted more and more foreigners, wearing masks ever more beautiful and colored. The Bauta soon became the typical Venetian mask, designed to enable the wearer to drink and eat without having to remove it, therefore preserving their anonymity and allowing them to enjoy the festival.

The Carnival of Venice reached its height in the 1700s, when it lasted from Christmas all the way through to the beginning of Lent. This was also the time of Giacomo Casanova’s adventures in the city. He is still considered a male icon for seduction. The Carnival of Venice experienced only one period of being banned, but it was long. It happened with the fall of the Republic of Venice in 1797, when it went under the control of Napoleon Bonaparte and forbade the Carnival’s celebrations and use of masks. The biggest fear by the new rulers was that the Carnival could be an event for disorder and rebellions in the city and represented their independence which no longer remained. Venice was then annexed to the Kingdom of Italy in 1866, but for about a century — also because of both world wars — the Carnival did not return.

Only in 1979, thanks to citizens’ groups and the City Council, the Carnival of Venice was restored to his former glory, becoming the only attraction of its kind worldwide. Besides, where else can you find a location like Piazza San Marco? Right in this magnificent square, every year “The Flight of the Angel” takes place, which coincides with the first Carnival Sunday and officially marks the beginning of the celebrations. “The Flight of the Angel” is when a brave masked artist descends from the San Marco bell tower to the foot of the Doge’s Palace, by a suspended rope, a tradition that has been going on for hundreds years and started almost by accident through a performance by a young Turkish acrobat in the mid-sixteenth century, only a few years before the famous Battle of Lepanto.

The Tuscan city of Viareggio, as far as Carnival is concerned, is the Venice of the Tyrrhenian Sea. In fact, the Carnival of Viareggio is among one of the most popular and well-loved Carnivals around the world, thanks to its amazing parade with exagerated floats, which takes place in the charming frame of the promenade. It all began in 1873, when the upper class of Viareggio — usually gathered in Caffè del Casinò — decided to celebrate Shrove Tuesday, the last day of Carnival, with a parade of floats covered with flowers. The year after, the Carnival of Viareggio became an official event, with the permission of the Mayor, and it would soon become the perfect stage to vent the popular Tuscan satire. Hiding behind thousands of masks, the Viareggio population protested against the high, local taxes.

To this day, the Carnival of Viareggio has never missed its emblematic and satirical feeling, using the floats to confront contemporary issues, from politics to social issues, from the environment to sports. All this is done depicting caricatures of popular people, hoisted on wonderful floats made with papier-maché.

So, the Carnival of Viareggio went from an elitist party to a public holiday, involving the great creativity of the Tuscan artisans. By using papier-maché, they were able to build large and light floats, as majestic as monuments. The parade of Viareggio has attracted many artists, eager to make their artistic contribution to the magnificent festival, including the Nobel Prize winner Dario Fo, the Viareggini Lorenzo Viani and Renato Santini, and the Belgian Jean-Michel Folon. The local folklore about the Carnival has been so enticing that a Citadel was constructed in the town entirely dedicated to Carnival and its masks and is where the floats are constructed. It is the largest themed attraction in Europe dedicated to masks, and it also houses a museum that tells the Carnival’s stories and exhibits parts of previous floats. Only the World Wars were able to stop the Carnival in Viareggio, but even in the years between the two wars, the Carnival’s spirit was not forgotten as the official song “Su la coppa di champagne” (Up the champagne glass) and the official magazine of the festival were both created then.

In 1931, the original mask of Viareggio was designed when the futurist Italian painter Uberto Bonetti won the competition for creating the mascot of the Carnival of Viareggio. The clown mascot was named Burlamacco. As a corollary to the music and dancing, Viareggio also hosts an important youth football event during this time, well-known as the “Carnival Cup.” In 1978, even a team from China participated in the tournament, representing the first real sporting contact between China’s communist government and western Europe. The power of Carnival!

This week’s article ends here, but there are still a variety of Carnivals across Italy to discover. So while you enjoy this special holiday, stay tuned on Italics Magazine for follow-up articles!