The origins of this global celebration are all the more reason why Italy deserves a moment. 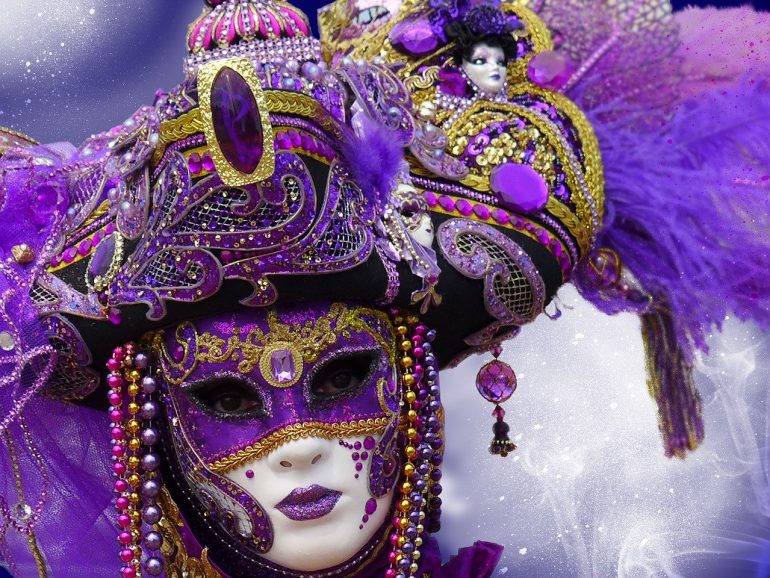 I’ll be the first to admit, when I think about all of the festivities leading up to Lent, Italy is not the first (second or third) thing that comes to mind. Maybe it’s a product of proximity, but most Americans would agree that Mardi Gras and the Carnivals of the Caribbean and Rio di Janeiro are the primary associations. Revelry in the form of elaborate costumes, crowds, music, and dancing are a common thread, and Italy’s capital city of Carnevale, Venice, doesn’t deviate. The origins of this global celebration are all the more reason why Italy deserves a moment. Italians were doing it well before the Americas and Caribbean islands caught on, six centuries to be exact.

Let’s pause for a quick history lesson on how Italy’s Carnevale, a derivative of the Latin carnem levare, meaning “to remove meat,” came about and why it started in Venice. The celebration originated in the victory of the Republic of Venice over Ulrico, Patriarch of Aquileia in 1162, which was commemorated by the slaughtering of one bull and twelve pigs in Piazza San Marco. This happened right around Shrove Tuesday, commonly known as Fat Tuesday in the United States. The lavish costumes, parties and amusements were gestures that signified the final indulgences before the commencement of Lent on Ash Wednesday, as well as a tip of a hat to the wealthy Venetian merchants who ruled the trade routes at the time. The elaborate masks were originally worn to conceal one’s identity, with Carnevale being the only time when social classes mingled without judgment or concern. Peasants and aristocrats, disguised by their masks, indulged their hedonistic fantasies in the form of gambling, romance, and political activism.

Venice definitely brings the drama, but the party doesn’t stop there. The festivities of Carnevale are enjoyed countrywide, with each region engaging in unique rituals and festivities that are rooted in local tradition. From the allegorical paper maché floats that parade through the Tuscany coastal town of Viareggio to the Medieval orange throwing battle in the Peimontese town of Ivrea, there’s more than enough Carnevale action to go around, which brings us to why we’re really here.

It is, in fact, the very reason we show up anywhere for that matter, the food. True, we can almost taste the sweet scent of King Cake in New Orleans, the curries that perfume the Caribbean and the flavorful feijoada in Rio, but what are the Italians eating? What Venetian delight is worthy of temporarily unmasking and potentially revealing one’s identity for a taste? Just like other Italian holidays, feasts and religious periods, the weeks preceding Lent are steeped in culinary tradition, with dishes that are only prepared and savored in during that specific period of time. From savory to sweet, the Italians cover all of the bases when it comes to Carnevale. We’re shining a spotlight on a few delicacies that are testing our willpower in booking a flight to Italy to partake in the delicious festivities!

Perhaps one of the most novel but equally tasty traditions, Venerdì Gnoccolare (“Gnocchi Friday”), is Verona’s big celebration that occurs on the last Friday of Carnevale. One of the oldest Carnevale festivities in all of Italy, it dates back to 1531, a year that took out a majority of the population in the St. Zeno area due to a food shortage. In later years, a noble donated a large sum of money for people to purchase flour make gnocchi, and that gesture has been celebrated ever since. The ringleader of the procession on Gnocchi Friday, aptly named Il Papà dello Gnocco or “Father of Gnocchi,” is a gnome-like “king of gnocchi.” He is elected every year to head the procession, gnocchi scepter in hand, as well as to carry out his term doing deeds associated to his royal role. It’s no surprise that gnocchi can be found pretty much everywhere during this period, from bars to restaurants to the home kitchens of Verona.

Classic lasagna is inherently rich, but the Neapolitans take it to an entirely level. Carnevale marks the last meat splurge before the Lenten fast, and this over the top dish was made with the intention of using up everything that’s left. It layers ricotta, pasta and a hearty ragu with meatballs, sausage, salumi, and sometimes even boiled eggs.

Dating back to the Fourteenth century, fritole are the most popular sweet treat of Venice’s pre-Lenten celebrations. Fried and sugar-dusted, these doughnuts are flavored with rum and lemon zest contain pine nuts, rum-soaked raisins, and occasionally filled with a custard or pastry cream. In the 1600’s fritole were made by frtolèri, a group of about seventy men who mastered the recipe and formed a union to protect their craft and tradition. A job that was strictly passed down from father to son, the union eventually dissolved but the recipe stood the test of time.

Also known as stiacciata unta, schiacciata alla fiorentina is a sweet flatbread, perfumed with the essence of orange and vanilla and finished with powdered sugar. It is easily identifiable thanks to its signature decoration, a Florentine lily made of cocoa powder. What was originally just bread dough enriched with lard, schiacciata can now be found filled with whipped cream, chocolate or custard. During Carnevale, it appears in every bakery, bar and pastry in Florence as well as in neighboring Tuscan towns.

Named migliaccio because it was originally made with millet (migilo in Italian), this crustless cake can be cooked on the stovetop or baked in the over and is classical to Naples and the Amalfi region during Carnevale. Scented with lemon and vanilla, “Ricotta Pie” (as many Italian Americans now call it) has a rich and creamy texture due to combination of semolina and ricotta.

Cannoli, tube-shaped pastries that can now easily be found at any Italian bakery or dessert menu in America, were once upon a time time, only made during Carnevale in Sicily. Fresh sheep’s milk ricotta enclosed in a crisp shell of golden fried dough and garnished with nuts, chocolate or fruit, cannoli were said to symbolize fertility.

Call them what you want (even better, any of the above names), these fried dough strips are the most typical street sweet that can be found all over Italy during Carnevale.

Holding true to the Italian table of abundance, there are clearly no shortages of sweet or savory ways to indulge during Carnevale. Are Carnevale Crawls a thing? If so, we have our passports ready.